Last time I wrote: “So the other reasons we are staying in Wasilla for a week are: to get the truck serviced, stock up on groceries and get Raider’s vaccinations up to date before we start south. Pretty much every RVer we talk to now is staging to leave Alaska. I think the day after Labor Day someone will fire a starting gun and every RV in the state will head south.” Getting Raider’s vaccinations up to date was no problem. Getting stocked up on groceries was no problem, but did take more than one trip.

Getting the truck serviced turned out to be VERY FRUSTRATING!! The truck is still under its original warranty and has been flawless. So I went to the Chevy dealer here Wasilla called Chevrolet of Wasilla which was close to the campground.

The truck needed an oil change and one of the Daylight running lights wasn’t working. Since we only have the one vehicle and nowhere to go I sat in the car dealership reading until the truck was ready, at most a two hour job. Sure enough after two hours they tell me the truck is ready and they had to replace the air filter as well. After 26,000 miles and all of the dusty roads getting here I am not surprised. I asked “did they fix the daylight running light”. “Oh, let me check, I will be right back”. “They are just starting that now”. Four long hours later they tell me that there is a bad part and they will “overnight it from the lower 48”. In Alaska speak that means it will be here in two days. We hadn’t made any firm plans about when we would leave Wasilla, so we weren’t too concerned.

We passed a quiet day reading and Kathy doing laundry.

Friday I called the Chevrolet of Wasilla, the part had arrived and I should bring in the truck at 2 PM. I spent another four FRUSTRATING hours at Chevy. They finally gave up and said that the new part was also defective and all they could do is order another part on Tuesday and it would arrive next Thursday. I told them that it wasn't important enough to waste another week. As I walked to the truck I noticed a puddle of oil under it, apparently when they changed the oil they didn’t get the nut tightened enough. So up on the rack to get the leak fixed. Once I drove away from the Chevrolet of Wasilla, I got behind a car and I could see a reflection in the bumper. Turns out they did fix the light and probably fixed it when I was there on Wednesday. Their so-called expert apparently is totally incompetent. The daylight-running lights only come on if the truck is in gear. Apparently, he had been doing all of his testing and diagnostics with the truck in park so the lights never came on. It was after 6 PM when I left there so I couldn't go back and tell them how stupid they were. ALL GM cars and trucks work the same way! How could he not know that????

We decided to stay the weekend to avoid any Labor Day traffic and leave Tuesday morning to make sure all of the traffic is gone. 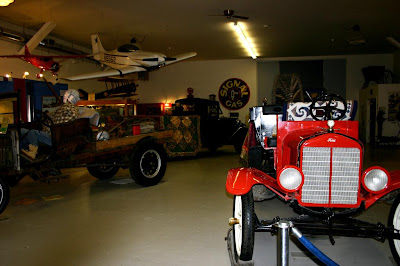 Saturday was the nicest day we have had in a long time. It was clear and sunny all day with a high of 70. We toured the Alaska Transportation Museum yesterday, it covers 20 acres. Some of the vehicles have been restored to better than new, others look to be held together by rust and a prayer. I must be getting museumed out, as big as it was I didn't think it was worth $8 a piece. The upside was we did spend an hour or so walking outside in the glorious 70 degrees and sun! 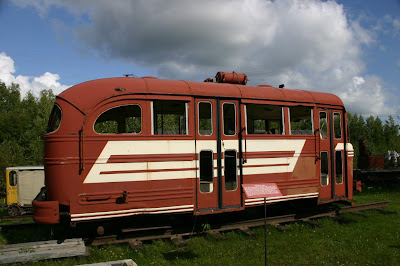 Sunday and Monday (Labor Day) were cold, gray and very windy. The RV Park wasn’t very crowded to begin with, but with the cold windy weather all but a few left on Sunday. With the RV sites now wide open we met the couple a few sites down from us John and Lora Newby. They are fulltime RVers, like us and have only been on the road a month longer than us. They had lived in anchorage for 20 years and returned to Alaska this summer so that John could fill in at his old job for people on vacations. Like a great number of fulltimers, John & Lora our members of Escapees RV club as are we. Through the miracle of the Internet they follow many of the same blogs we do and know some of the same people. John & Lora are committed to staying in Alaska until mid-month and then will make beeline to Seattle for the birth of their first grandchild. One thing they expressed is a concern that most RV Parks and some gas stations will be closing along the route on September 15th. In the short time we have been on the road we have bumped into many people we had met somewhere else on the road, including some people we met in Arizona last winter we met up here in Alaska, I am sure that we will meet up with John & Lora somewhere down the road.

Tuesday we finally left Wasilla about 11 AM and the roads were very empty. About an hour into the trip we hit the largest and longest construction zone we have seen yet. We were about the middle of the pack waiting for the pilot car. We had enough time to eat lunch and use the bathroom in the trailer before we started the engine again. Then the drive through the construction zone with the pilot car went for miles.

About half hour after leaving the construction zone the “Check Engine” light on the dash came on. All of my gauges were good so I pulled over to check the owner’s manual. It said that there was something wrong with the emissions system and that I should have it looked at. While driving the next 40 or so miles to Glennallen, I called the Chevy Customer Assistance but all they could say was “it needs to be looked at”.

There isn't much to Glennallen and no one to look at the truck. We stopped for fuel and then went to the Northern Nights RV Park. There were RVs in the park but no one around even though they had a sign that said the office opened at 3 PM. The guide book said they would be open until September 15th. While waiting for someone to show up I decided to look under the hood after all Chevrolet of Wasilla did put a new air filter in the truck. All I did was jiggle the air filter to see if it was tight. We decided that if we had to go to a Chevy dealer it made more sense to go to Fairbanks rather than backtrack to Wasilla, so we started north. When I started the engine the “Check Engine” light didn't come back on. After another 30 miles the light still didn’t come back on. It seems that no one at Chevrolet of Wasilla knows how to do anything right. This is obviously the worse service we have had anywhere and I know that more than one person worked on the truck so it can’t be just one inept employee.

We pulled into the Gakona Alaska RV Park about 4 miles past the town of Gakona, Alaska (try finding that in your atlas) about 5 PM. When we arrived there weren't any RVs here, but they are open until the 15th of September. By night fall 4 more RVs had come in.

We have decided when we leave here we will head to Tok and see if the “Check Engine” light comes back on. It is raining today and since we will have to wait in Tok anyway until our mail arrives we decided to stay here today. This is a VERY quiet RV Park off of the road. After 9 days so close to the road in Wasilla it is a nice change. Our air card works here, but they have WIFI for $2.50 per day which is much faster than the air card. We will spend the day reading, blogging and surfing the Internet, as there is no TV or cable here. Since there is no one here but us we let Raider run off lead yesterday evening and he ran himself to exhaustion. This is the most freedom he has had since West Yellowstone back in May.

I wrote today’s blog entry at least in part to let all of you know that not every day as a fulltimer is perfect.

Posted by Grant and Kathy Webb at 3:25 PM