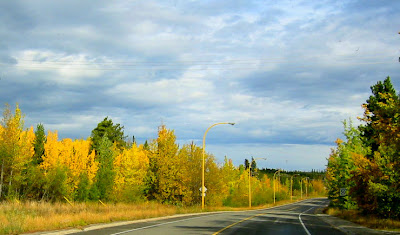 Our morning in Haines Junction was cold and raining. We only had about 100 miles to travel and we had intermittent rain the whole way. It was not an inviting day and although fall foliage was still spectacular the views were not very extensive.

We were in Whitehorse for a couple of days to do laundry, get groceries and pick up some Yukon Red beer at the Yukon brewery. As they say “Beer worth freezing for”.

We also took some time to revisit the fish ladder at the Whitehorse Dam. When we were there in June the salmon hadn’t arrived yet and now that we here in September it turns out we are too late and they have already passed through the fish ladder in August.

We did have an opportunity t try yet another rare game meat. The Hi Country RV Park in Whitehorse has cable TV and WIFI. One evening as Kathy was starting dinner an ad came on TV about a restaurant that served Musk Ox! How could we pass up the chance to try Musk Ox? We went to dinner at Klondike Salmon and Ribs. When we were here in June this place had a line down the side walk for lunch and dinner. Although they were doing a good business there was no waiting on a Monday night in September. We both order the musk ox stroganoff and pitcher of Yukon Red to wash it down. Musk Ox is also very good again very lean and slightly different texture than beef.

The Klondike Salmon and Ribs restaurant is on Second Street in downtown Whitehorse and yet it is closing for the season in just 7 days. I had no idea that a restaurant in the middle of town would be so completely dependent on tourism.

More pictures of Whitehorse, Yukon: Stop in Whitehorse on our way back slideshow 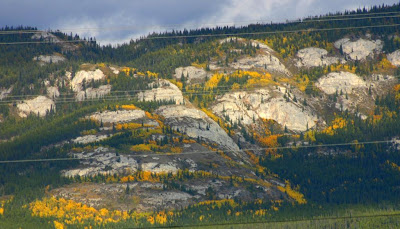 Posted by Grant and Kathy Webb at 9:44 PM