The Road from Tok, Alaska to Haines Junction, Yukon 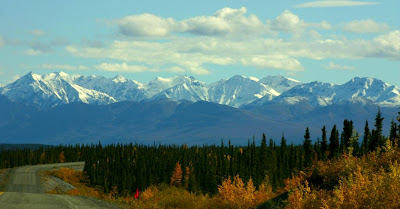 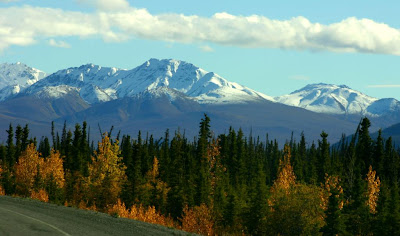 Yes, we have left Alaska, but it is still a long way to the lower 48! We had been told by several people that the road from Destruction Bay, Yukon to Tok, Alaska was the worst on the entire Alaska Highway. We even had a few say that it was so bad they were going to go back through Chicken to Dawson City on the Taylor and Top of the World highways. As you can imagine we were expecting a REALLY BAD road. The road from Tok to Destruction Bay has plenty of frost heaves, road construction and potholes, BUT it isn’t nearly as bad as the 46 miles of gravel on the Taylor Highway between the US\Canada border to the town of Chicken, Alaska and the 70 miles of paved frost heaves and potholes from Chicken to Tok! The only two roads in all of Alaska worse than the Taylor highway are the Dalton Highway to the Arctic Ocean and the Denali Highway between Cantwell and Paxton.

We had planned to drive only about 225 miles to Destruction Bay Yukon, but all of the RV Parks in and around Destruction Bay have already closed for the season. The next open RV Park was in Haines Junction 60 miles further down the road. Although 285 miles is more than we like to drive in a day we had a beautiful day for the drive.

I know that we have seen spectacular scenery throughout our trip, however the 225 miles from Tok to Destruction Bay was the MOST SPECTACULAR! The whole way we saw the snow capped peaks of the Wrangle St Elias range. The snow is powdered way down their slopes to tundra in autumn brown, red and yellow which in turn gives way to the evergreens that are sprinkled with the birch trees in yellow and red. There are also numerous blue lakes along the way and we had a sky full of white puffy clouds. Unfortunately, there are very few spots to stop and take pictures so most of our pictures were taken through the dirty windshield of the truck. Kathy said to send her apologies!

About an hour outside of Tok there is a very large construction area. We had to wait 45 minutes for a pilot car to lead us through. We were the first car in line and the flagman, Ray Thomas was a talkative, friendly fellow.  Ray told us about his wife, his daughters in college, his being Athabascan heritage, and his hunting plans for the fall. He told us he was going to go moose hunting. We commented that moose must really taste good because everyone we talked to in Alaska wants to go moose hunting. Ray said “I am having moose meat for lunch today would you like to try some?” From our first trip to Alaska 10 years ago we had heard how good moose was and on our subsequent trips tried to find somewhere where we could buy moose meat. On our Canadian trips we have looked for moose meat, but had never found any where it was available. We jumped at the chance! Moose is delicious; it is very lean, very tender and has almost a sweet quality to it. THANK YOU RAY!!! 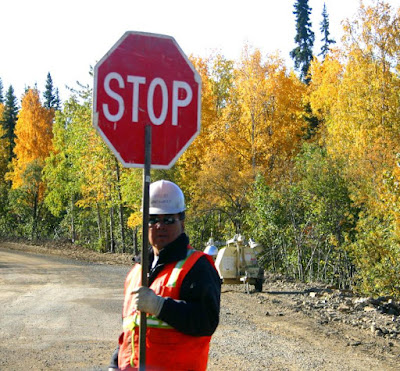 When the pilot car arrived we drove through 12 miles of construction at 20 MPH or less. 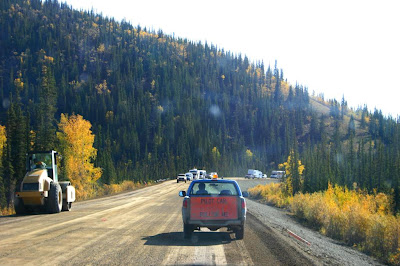 On the road to Destruction Bay, we had our closest truck and moose encounter. The moose came slowly out of the trees next to the road and I stopped completely. The moose then slowly walked across the road. Raider decided to bark at her which sent it up the side of the road a little faster. When we were back in Yellowstone, Raider had always barked at the buffalos in the road but never the moose. We have no idea why he decided to bark at this moose. Course, they grow as large as horses up in this area and he must have thought he was our guard dog! 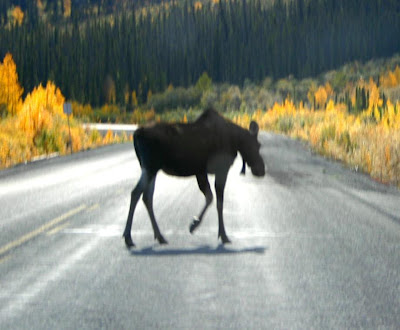 A few miles past Destruction Bay we came across a momma grizzly bear and her two almost full grown cubs. They were walking down the middle of the highway. I stopped to let them decide what to do. This was Raider first close encounter with bears and he started barking like a Rottweiler. That sped up the momma bear and one of the cubs across the road. The other cub decided to cross behind the trailer. The cub kept looking at the truck and had a look as if to say, “Is that a wolf, Mom?!” 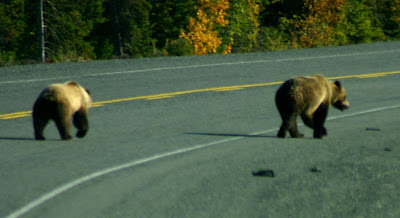 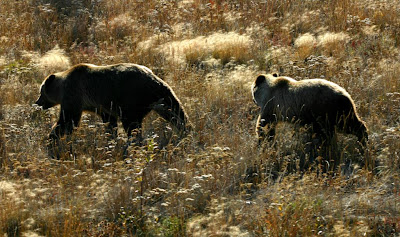 See the rest of the pictures: From Tok to  Hanies Junstion Slideshow 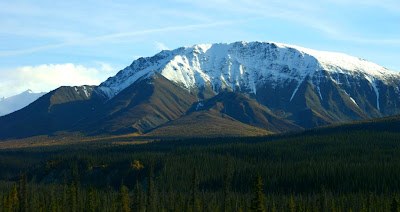 Posted by Grant and Kathy Webb at 9:12 PM