A view of Mt. Charleston from our back window

Where did the last two weeks go and what have we been doing? I have no idea to both of those questions.

We had planned on heading to the coast, but couldn’t get  a site for two weeks because all of the weekends are already booked up. So, we are back at the Escapee CO-OP Pair-a-dice RV Park in Pahrump, Nevada. We were here last November and you can read about it at: November 2008. 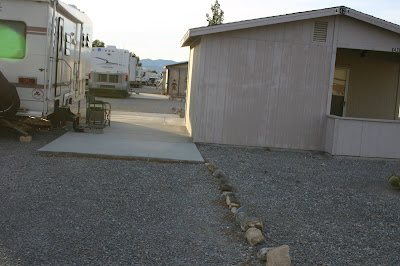 One of the landscaped lots 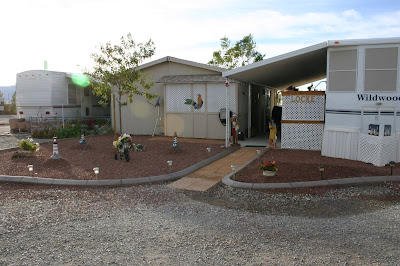 One thing I wrote then was “The Pair A Dice CO-OP RV Park is one of the nicest parks we have been to and is in a very quiet area. We came here to relax for a few days and have ended up staying for 10 days. Everyone here is very friendly. It usually takes us an hour to do Raider’s morning walk, because everyone wants to pet him and take time to chat.”  Quiet RV Parks are hard to come by because RV Parks are usually located next to major highways and train tracks. Pahrump Valley has no Interstate highway, no trains and as far as we can tell no airport of any kind. The RV Park is located about 3 miles from the nearest highway of any size and about 5 miles from the center of town.

Like all RVers the channel we watch most is The Weather Channel. We have been amazed at all of the rain, snow, blizzards, flooding and tornadoes happening all over the country. Here in Pahrump everyday has been mid-70s or better. We have had a couple of very windy days, which are good days to stay inside and read. All of the other days have been good days to sit outside and read. So, I guess what we have been doing for the past two weeks is reading and beading. We have also been taking Raider for two walks a day around the park to get us all some exercise. If we walk up and down every row it is a 2 mile circuit.

We have made a couple of visits to a small casino nearby with good, cheap food and yes we did make a few contributions at the slot machines as well. We also made a brief pass at Ash Meadow National Wildlife refuge but didn’t see anything of note. At our feeders here in the RV Park we have had Lesser Goldfinch, House Finch, Mourning Doves, House and White Crowned Sparrows foraging on what the little guys dropped and occasionally Gamble’s Quail. We have also had Cooper’s Hawks come by almost daily to see if they can scare up some Goldfinch dinner at the feeders.

Today we are having the Montana waxed for the first time, it needed it badly. One of the other guests in the park had somebody doing a wonderful wax job on his jeep. We recognized the vendor from last November when he was detailing an Excel Fifth Wheel. After the tens of thousands of miles we’ve put the Monty through, it deserved a professional job! 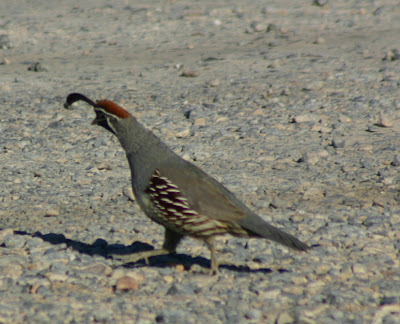 Posted by Grant and Kathy Webb at 11:21 AM 8 comments: Links to this post 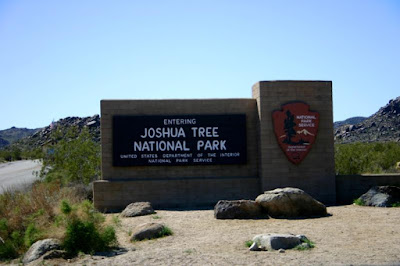 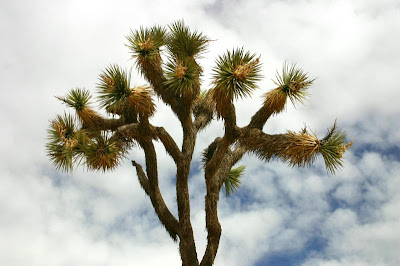 The Park Service describes Joshua Tree National Park as “Two deserts, two large ecosystems whose characteristics are determined primarily by elevation, come together at Joshua Tree National Park. Few areas more vividly illustrate the contrast between high and low desert. Below 3,000 feet, the Colorado Desert, occupying the eastern half of the park, is dominated by the abundant creosote bush. Adding interest to this arid land are small strands of spidery ocotillo and jumping cholla cactus. The higher, moister, and slightly cooler Mojave Desert is the special habitat of the undisciplined-looking Joshua tree, extensive strands of which occur throughout the western half of the park. ”

Unfortunately, all of the campgrounds in the park must have been made back in the 1930s when everyone tent camped, because none of them had room for a modern RV. There aren’t a lot of RV Parks in the area, having tried different RV Parks we settled on Twentynine Palms Resort. It is located only a few miles from the parks east entrance and is quietly located away from the main highway running through the small town of Twentynine Palms.

When we were here three years ago, it was so cold that it snowed one afternoon!  When we were here two years ago it was over 100 degrees. This year the weather was perfect all week. It was mid to upper 70s and calm to light winds. 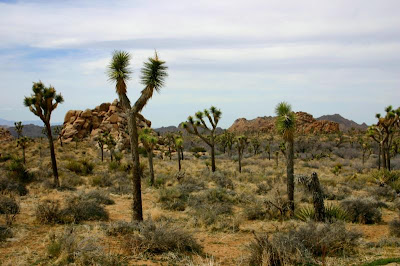 This has not been a very good year for flowers, but since Joshua Tree National Park’s lowest elevation is 1,200 feet and its highest elevation is 5,814 feet there are some bands of flowers based on the elevation. We managed to find an area with quite a few flowers. 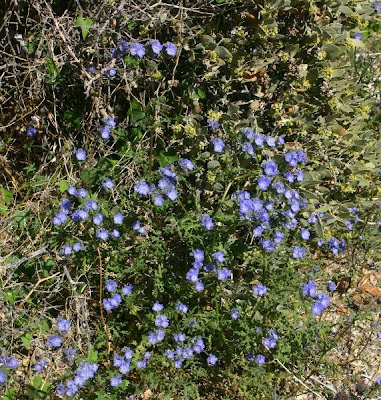 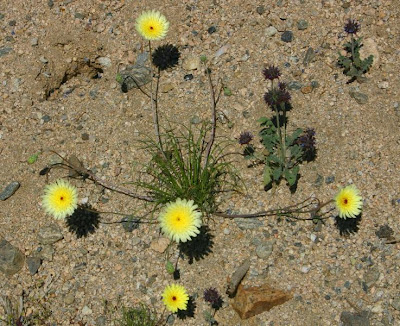 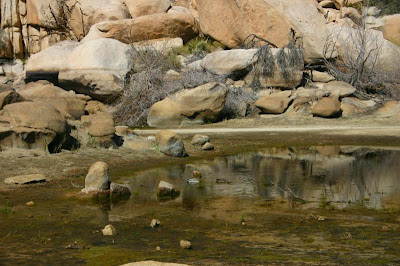 Usually the second best place for birds is at Cottonwood Springs near the south entrance to the park. This is an actual palm oasis and even during the current drought there is still some water there. We probably did not arrive there at the best of time as it was near noon and very windy. We did see a few hummingbirds and a wren that would not come out from under its cover. 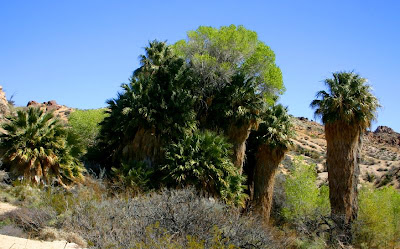 Even with all of our hiking and travelling in the park the only wildlife we saw were lizards and squirrels and not very many of them. 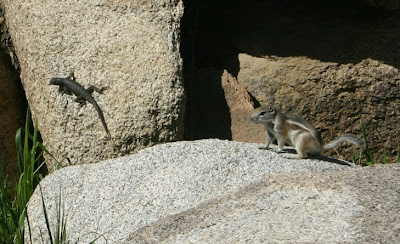 In the lower part of the park there is an abundance of Cholla and Ocotillio. From experience I can tell you to heed the warning whenever you are around Cholla. 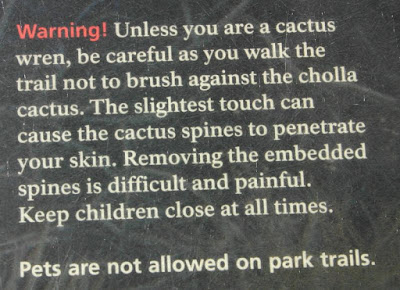 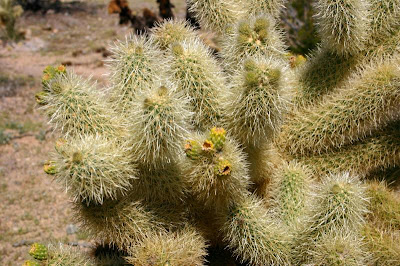 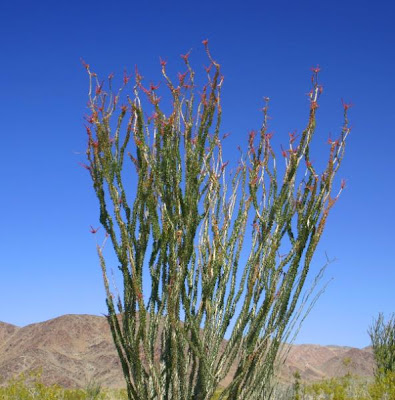 Of course, Kathy is still beading. 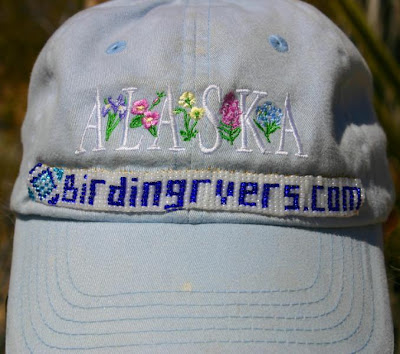 Posted by Grant and Kathy Webb at 12:06 PM 3 comments: Links to this post

There is a saying about being retired “you wake up with nothing to do and go to sleep with it only half done”.  That must be what has been happening to us; almost two weeks without a blog posting!!!

As we had planned, we met up with MOC friends for boondocking (no hookups) back on the desert near the town of Quartzsite just a couple of miles from where we had been parked when all of our excitement started. Carl & Susan, Ray & Pam had been to Texas and back since we saw them a month ago. Dennis & Mary Kay had been to their stick home and were back on the road since we had last seen them. All six were planning to spend the weekend at Quartzsite and then return to their stick homes after the weekend. However, after they got phone calls from home about all of the rain and bad weather in California they decided to stay for the week. Since we had no plans we decided to stay as well.

After a month at the KOA in Blythe next to I-10 it was very quiet on the desert. As at all RV gatherings we spent our time having: Happy Hour, eating and campfires. Either we went into town to eat (not many restaurants in Quartzsite) or having impromptu potlucks. The weather in Quartzsite was wonderful both day and night the entire week we were there. We had one day that topped out at 88 degrees!

When not spending our time with Happy Hour, eating and campfires. Kathy and the Ladies did a lot of beading and bead buying. Raider and I did a desert walk every morning sometimes with the other RV dogs from our group and sometimes by ourselves. In the afternoon Raider napped and I read or napped. 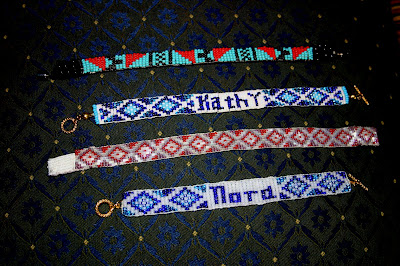 Kathy, Raider and I did break away from this hectic schedule to take a 270 mile day trip to Surprise, Arizona to do a little shopping and to see Kathy’s neighbors from when she lived on Long Island as a child. Mary and Buddy were pioneer RVers in their day, 20 years ago. Not too many people thought of selling their homes and living in a travel trailer back in the 1980’s! Now in their 80’s they no longer tow their RV. They have retired to a park that has RV’s, park models and mobile homes. They own an “Arizona Room”, with their faithful and in mint shape Prowler next to their patio for the Guest House. They also have another place for the summer in the White Mountains, near Flagstaff, Arizona where they have a fifth wheel in a similar park. Up there they are at 7,000 feet in elevation and the temperature is a lot cooler! They were a treat to see again, still spry and enjoying this carefree lifestyle!

Posted by Grant and Kathy Webb at 10:15 AM 2 comments: Links to this post