April Update - What have been up to the past month? 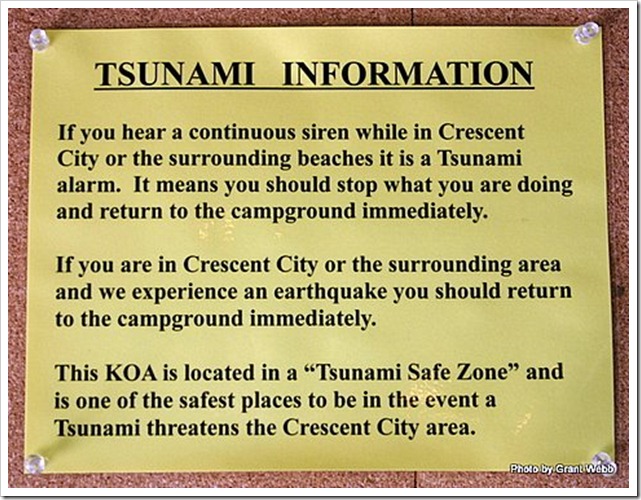 Here is a sign that you just don’t see very often at RV Parks!

I continued the 52 week Raider picture project for a couple of weeks beyond our last posting. However, since all of the Raider pictures were just pictures of him laying down and resting. I stopped taking them. Rest assured Raider is fine.

After our 20,000 plus mile trip to tour the East Coast last year our only real plan for this year has been to cover a lot less miles. Toward that end we have been thinking about revisiting the Oregon and Washington Coastal areas. Always on the lookout to visit new areas.  We had been thinking about going due north out of Pahrump to Southern Idaho and then due west across Oregon. This would give us some whole new areas to explore. However, as most of you know the snow this winter just hasn’t seem to end in those areas. We extended our stay in Pahrump for 2 weeks hoping that the conditions would improve north of us but no luck. Also the weather in Pahrump suddenly turned hot into the 90s and then was followed by days of high wind. So, we opted for a plan B. We would head back to California and then north up the coast avoiding any chance of snow. This would also give us a chance to stop by and visit Kathy’s folks in Mariposa, California.

This still left us with what to do this summer. Although, we change plans on a whim it is nice to at least have some idea of what we think we are going to do. If for no other reason than it gives us a direction to point the truck. We hit upon the idea of trying our hand at  volunteering. We had said even before we started on the road that we wanted to do some volunteering once we where full-timers. Over the years we have chatted with volunteers at various state and national parks about what there jobs are like.

Most volunteer positions fill up months in advance and we have trouble making plans even weeks in advance, but we thought we would at least ask. Our first choice was to be Lighthouse Host at the Umpqua River Lighthouse near Winchester Bay, Oregon. Our friends Bob & Linda (Because We Can and Because We Can II) were Lighthouse Hosts at Umpqua River Lighthouse in September and October of 2006 and 2007 as well as September of 2008. We had visited Umpqua River Lighthouse during our visit to the Oregon Coast in June of 2009 Mill Casino, Umpqua Lighthouse – MOC Rally Continues. We called Umpqua Lighthouse at exactly the right time as they had just had some volunteers cancel and they needed someone to fill in for 2 1/2 weeks in June. We thought that would be perfect for us as we could get our “feet wet” to volunteering with a short assignment.

With our plans set that we had to be in Oregon on May 1st, we took advantage of a lull in the wind and headed back to California. We stopped for a one week to visit with Kathy parents and then headed up the California Central Valley before make a left turn for the coast. Over all we had nice weather with only minimal rain and occasional wind. Over the years we have been up and down California’s US 101 many times, but always in the summer. During the summer there is a lot of traffic of RVs, cars and trucks. This time of year the road seemed almost deserted.

We arrived in Crescent City, California on a very clear day with great views. However, once we stepped out of the truck we found out that is was only 50 degrees and there was a very strong cold wind.

More on our visit to Crescent City in our next blog posting.

Posted by Grant and Kathy Webb at 1:21 PM 7 comments: Links to this post 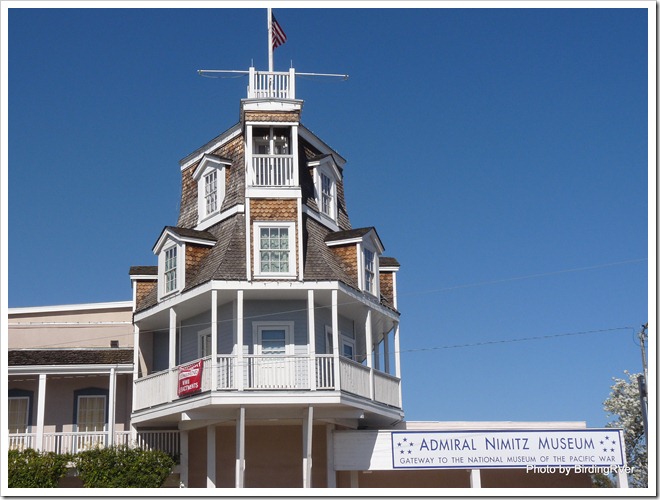 In March of 2010 we were in Fredericksburg, Texas for two visits of 10 days each. The first visit was a “tourist” visit to see the sights. At the end of that visit we decided to buy a new Montana 5th Wheel. We left Fredericksburg for a week in Kerrville then returned to Fredericksburg to move in to our new trailer. It was a very busy time and the blog was getting further and further behind so the blog entry of our “tourist” days never got written. WE LOVED FREDERICKSBURG! So, here on the one year anniversary of that visit is the story of our first 10 day visit to Fredericksburg.

After leaving the Caverns of Sonora we moved to Fredericksburg, Texas, It seemed  like almost ever RVing blog we follow the bloggers have spent some time in Fredericksburg,  in the Texas Hill Country. The town was founded by German immigrants in 1846. It has many old buildings built from limestone bricks. The “new” Catholic Church is 105 years old and old Catholic Church is still standing at 160 years old. Both of these buildings are in use today and are gorgeous inside. 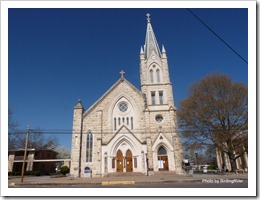 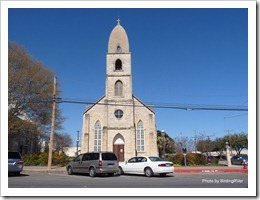 We were told that the town has 86 eating places and half of them served German food. Depending on your taste that may or may not be a good thing, but, for me it was wonderful. Fredericksburg is also the home of the oldest microbrew in Texas. Which serves both German and typical Pub food. Of course we had to make a few visits there to tryout the food and beer. We approved of both.

Fredericksburg is also the birthplace of Admiral Chester Nimitz, Commander-in-Chief of the U.S. Pacific Forces in World War II. The hotel owned by Nimitz's grandfather has been restored to how it looked in 1900 and converted into a museum that follows Admiral Nimitz Navy Career. The Nimitz Hotel is a part of the much larger Nation Museum of the Pacific War. Which includes a 40,000 square foot gallery that has displays covering World War II from its earliest cause through all major battles on land or sea.  Another piece of the Nation Museum of the Pacific War is the Pacific Combat Zone. The Pacific Combat Zone is 3 acres mostly outside with equipment used during war such as  tanks, air planes and an actual  PT Boat. 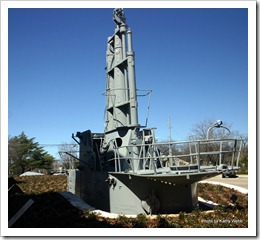 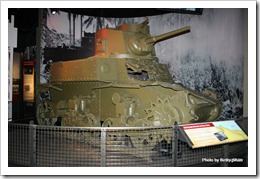 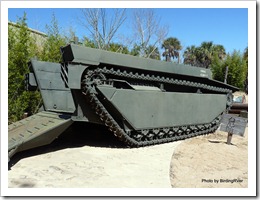 Just a few miles from Fredericksburg is Lukenbach, Texas of Waylon Jennings song fame: “Let's go to Lukenbach, Texas
with Waylon and Willie and the boys”. Not being fans of Country Music we weren’t impressed. The whole town only has about 6 buildings. Oh well, at least we can say that we have been to Lukenbach, Texas even if we didn’t see Waylon, Willie or the boys.

Two miles outside of Fredericksburg is the site of Fort Martin Scott. It was established in December of 1848 to protect the settlers from the Comanche Indians. However in May of 1847 the founders of Fredericksburg, the German Immigration Company signed a non-government treaty with the Comanche. Since neither side ever broke the treaty Fort Martin Scott became a supply depot and then was closed all together in December of 1853. There is only one remaining building from the original fort but, the site has undergone extensive reconstruction to give you an idea of what fort life was like in 1850. 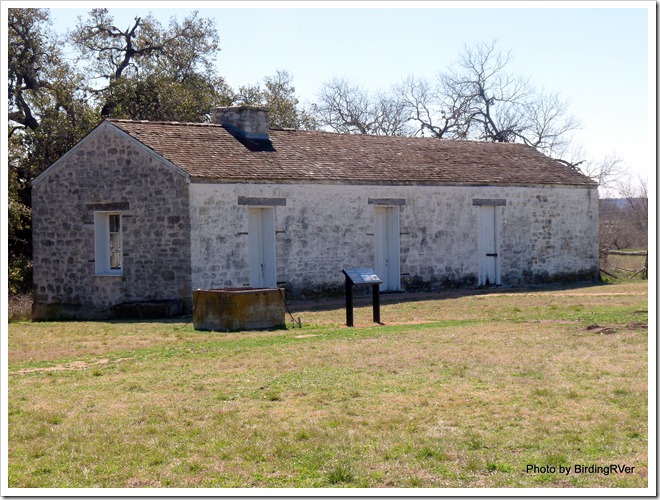 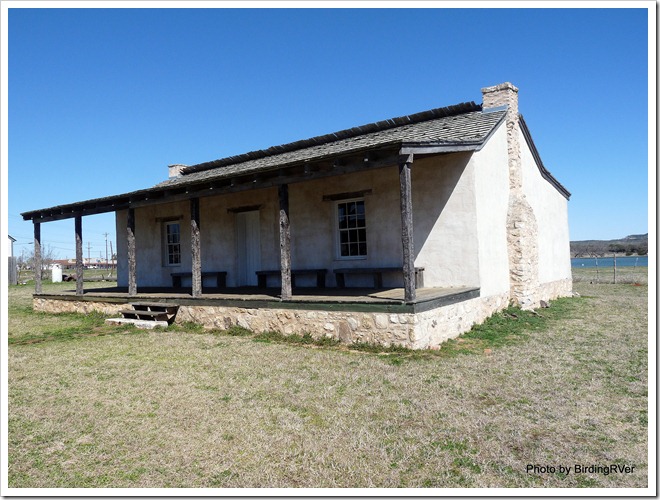 Twenty miles from Fredericksburg is the Lyndon B. Johnson National Historical Park and next to that is the THE SAUER-BECKMANN LIVING HISTORY FARM a Texas State Park. The drive is through part of the Texas “wine country”. It is like driving through Napa in California. Mile after mile of vineyards and chateaus.

THE SAUER-BECKMANN LIVING HISTORY FARM is restored to its early 1900s condition when the Beckmann family lived there. The interpreters in period costumes do the day-to-day activities of a 1900s Texas-German farm family; include cooking meals and caring for the farm animals. The buildings some dating back into the late 1800s are in great shape. 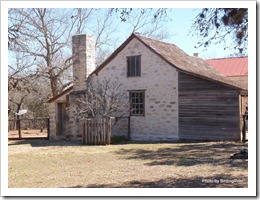 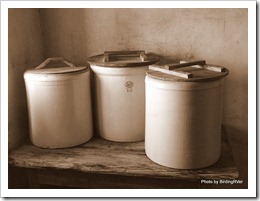 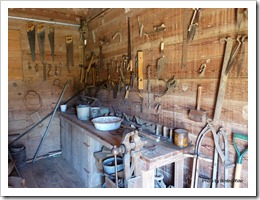 The Lyndon B. Johnson National Historical Park is a section of President Johnson’s Ranch. They give you a cd to play as you drive around the ranch that gives a running narrative of what you are seeing. Sites include the Elementary School he went to, a reconstruction of the house he was born in, his grave site, and his home also know as the “Texas Whitehouse”. 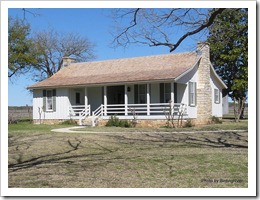 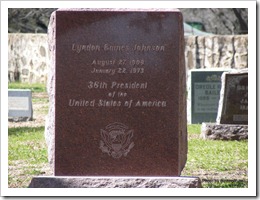 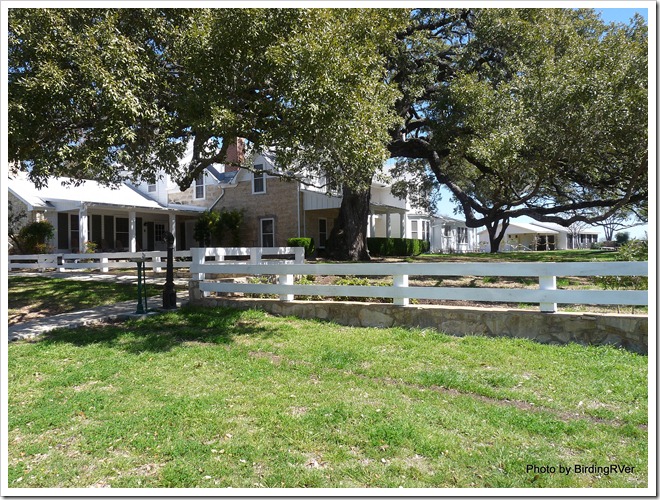 President Johnson frequently held Cabinet Meeting under this old tree in front of his home.

The National Park Service gives tours of the first floor of the Texas Whitehouse. Unfortunately, they don’t allow pictures. However, our tour guide  was one of those absolutely great tour guides that we come across from time to time. From this wonderful tour we got a much better understanding of LBJ, the businessman, the Politian, how he worked and the “style” of the LBJ Presidency. He was a far more complicated person that I had ever imagined. The house is very modest by presidential standards and is mostly just frozen in time back to the late 1960s. One of the great touches of the tour is in the kitchen. The refrigerator doors are covered with pictures of and pictures drawn by the Johnson’s grandchildren; just like you would find in any grandmother’s kitchen. 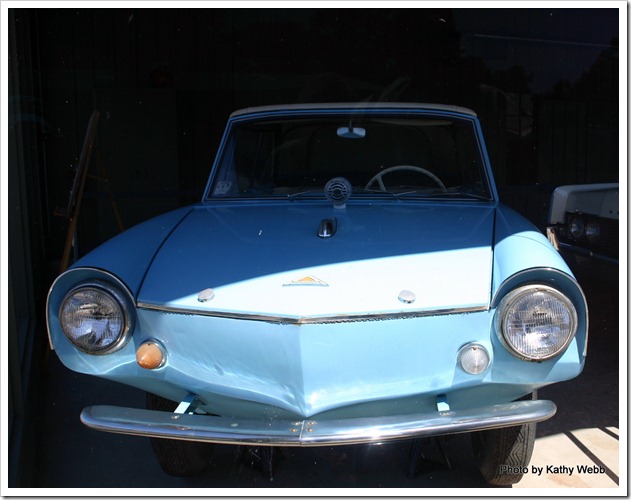 This car has propellers on the back and can be driven right into a lake or river and it becomes a boat. The guide said President Johnson loved to bring heads of state out to his ranch and drive them into the river.

I remember LBJ as the “old guy” that was the President while I was in Junior High and High School. A poignant moment for me occurred when the tour guide pointed out the LBJ started his presidency at 55 and was 61 when he left office. As I rapidly approach my 60th birthday, he doesn’t seem to be nearly as old as I had remembered him.

As always there are many more pictures on the slideshow:

Posted by Grant and Kathy Webb at 2:58 PM 5 comments: Links to this post