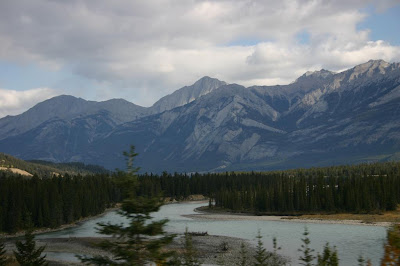 Our week in Jasper continued with daily elk visits. The campground seems to have at least three males, each with his only group of cows. As you can see in the picture, they would occasionally spar with each other one evening, but mostly they would just bugle at each other. 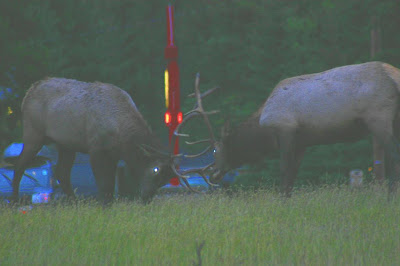 We did a variety of maintenance projects while we were in Jasper. The biggest project we tackled was to wash the truck and the trailer with soap, water and sponges. This is always a major operation, but we finally had the last of the Alaska and Cassiar Highways dirt and mud off.  Naturally it rained a few days later. 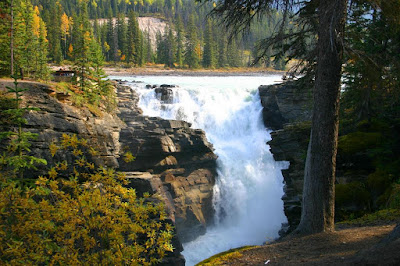 Jasper is about 4 hours from the towns of and Prince George and Kamloops, British Columbia and Edmonton, Alberta. It isn’t really near any population center but on Saturday every hiking trail head we passed was full to capacity. We had planned a hike for the day but couldn’t find anywhere to park the truck, so we revisited Athabasca Falls and had a picnic at the confluence of the Athabasca and Whirlpool rivers. Sunday it rained. 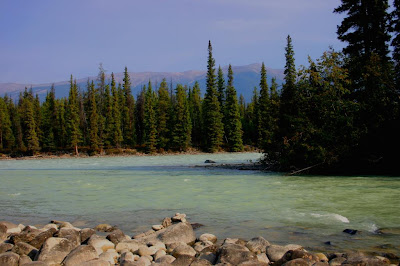 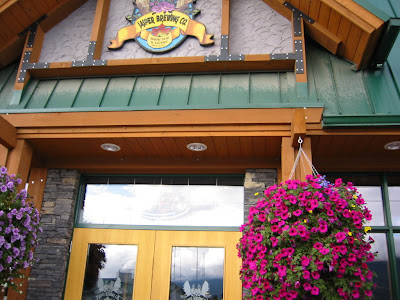 On our last day in Jasper we stopped for one last lunch at the Jasper Brewing Company, bought groceries and did a little shopping. Here in Alberta they have a very unique gemstone called Ammolite. This is the outer layer of a fossil snail (see Ammonites) and is only found near Lethbridge, Alberta. This gem’s color changes with the light but, looks similar to a rainbow Ammolite Jewelry. It is also the official gemstone of Alberta. Kathy decided she wanted to see what Ammolite looked like in person so we stopped by a store to “just look”. Needless to say with the help of our salesperson, Jessica at the Our Native Land store. Kathy is now the proud owner of an Ammolite pendant.

Our first days back in Jasper were nice and warm with cold nights, but as the week progressed it got colder and colder. Because Jasper is a large glacial valley with very tall mountains on the east and west sides the sun comes up late, after 8:30 and goes down early, by 5:00. The nights started dropping into the 20’s. The morning we left Jasper it was only 35 at 11 AM.

We decided that we had had enough of the cold and we would start heading south to hopefully get warmer weather. This means rather than take the Yellowhead Highway to Winnipeg and then drop down to the US, we are going to drop down to Trans Canada 1and then head to Winnipeg. If we don’t see an improvement in the temperature we will head further south to Highway 94 before heading east. 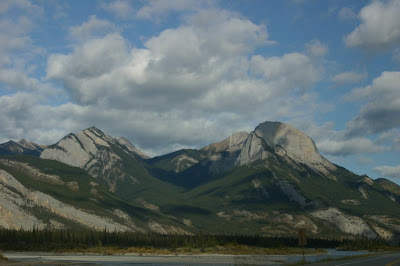 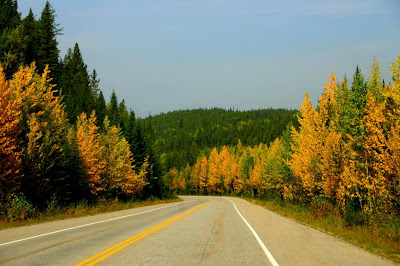 Posted by Grant and Kathy Webb at 4:46 PM