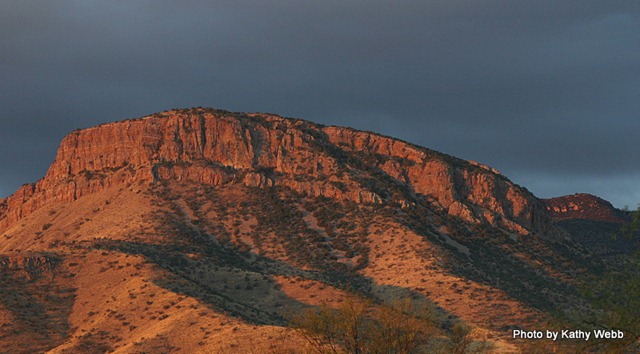 Thought I should update the blog before it gets too far behind again.

We have started to move into the busy season here at Kartchner Caverns. The campground gets sold out even during mid-week. The Cavern Tours are now selling out days in advance and ever tour is full. Everyone says that the really busy time will be in March when ever school in Arizona has Spring Break.

The biggest news of the past two weeks was SNOW! I walked out of the 80+ degree cavern into snow blowing sideways. The snow lasted about a half hour and was followed by another half hour of rain to wash it all away. This part of Arizona remains in a severe drought. We have only had a few nights of rain since we arrived back on New Years Eve.

We continue to have a steady stream of visitors. It is so good to reconnect with people we have met while on the road, some of whom we haven’t seen for a couple of years.

Our bird list continues to grow. In the past two weeks we have added Rufous-crowned Sparrow, Northern Beardless-tyrannulet, and Vermillion Flycatcher. The Rufous-crowned Sparrow has learned that there is condensation on the outside of the door used to enter the Caverns and between tours he will come by to get a drink of water. 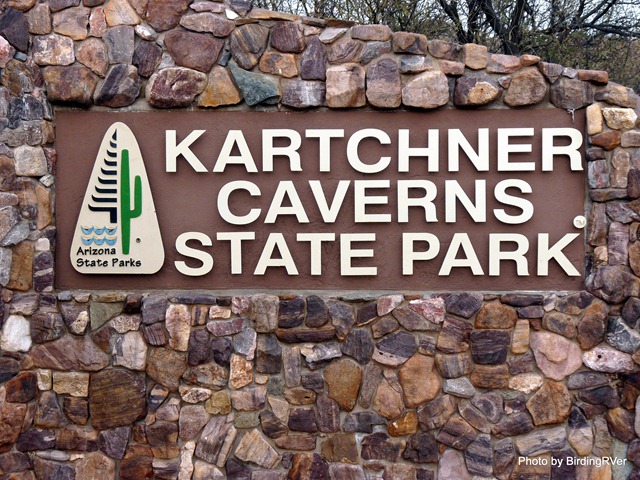 Proof we are really at Kartchner Caverns State Park in Arizona.

Our poor neglected blog! Over a month without an update.My excuse is that we have been busy.

First a few pictures of the Park. There is a strictly no cameras in the cave policy so all of the pictures will have to be outside. 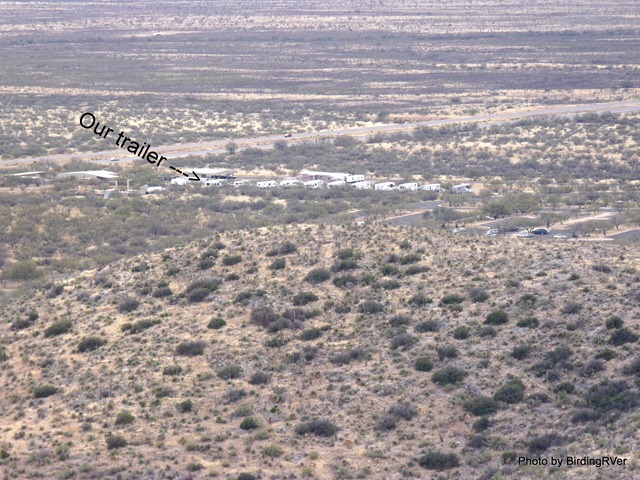 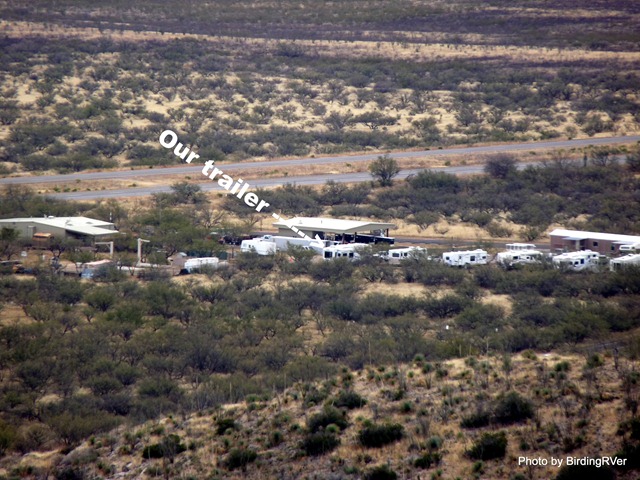 The above pictures shows our site in the Lower Volunteer Village. Kartchner Caverns State Park; including the Camp Host site, I believe there are 25 volunteer sites. There are also dozens of volunteers that come in from the surrounding towns of Benson and Sierra Vista. 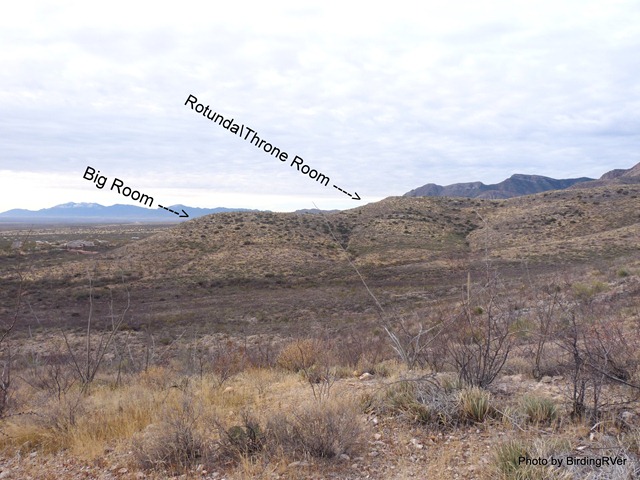 Kartchner Caverns is primarily made up of two large rooms that together cover just over 7 acres. The larger of the two rooms is called the Big Room. The second room is called the Rotunda\Throne Room due to the domed shape ceiling. It is amazing to look at these two non-descript little hills and realize what wonders lay under them. 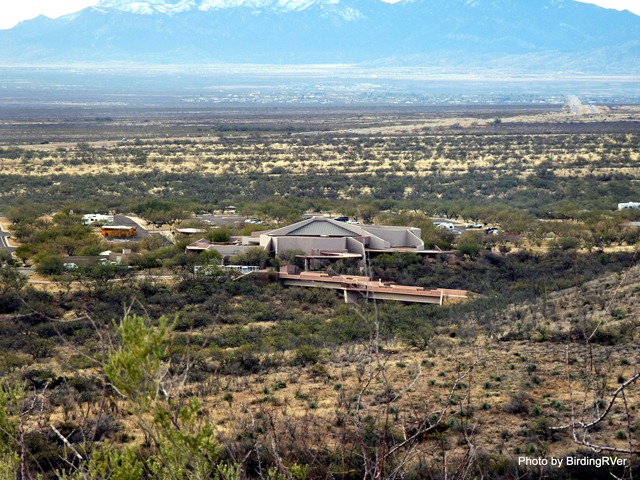 This is a picture of the back of the visitor center which is called the Discovery Center. It is where all of the tours start. 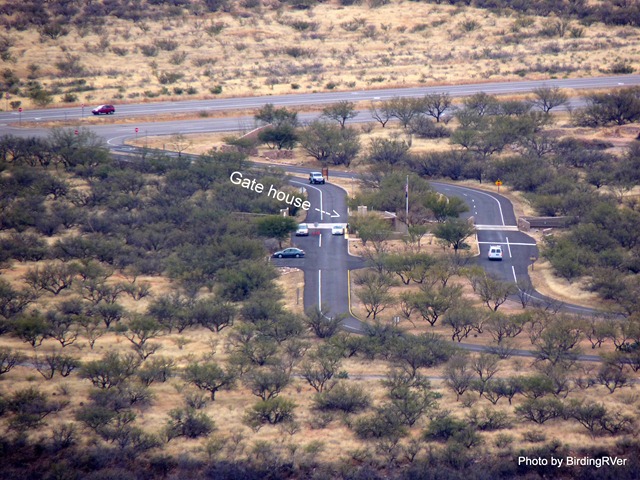 A picture of the Front Gate where Kathy usually works once a week. 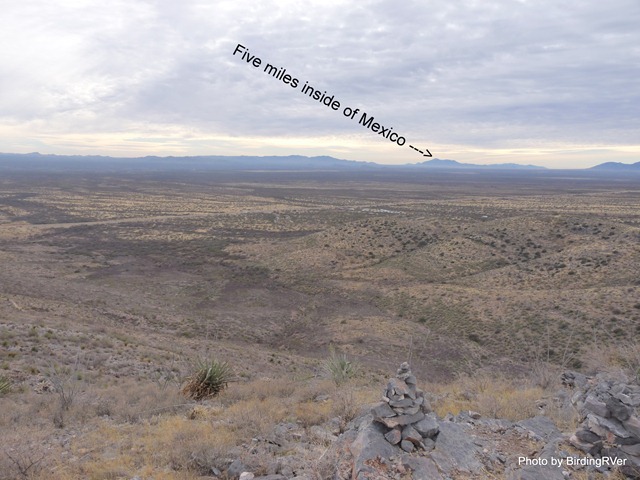 We are about 40 miles from the border of Mexico. These pictures were taken on one of the few overcast days we have had, but as you can see our visibility is at least 50 miles in every direction.

Work is four 5 hour days, but the 5 hours is very loosely interpreted. Most weeks three of the 4 days is spent as "trailer" on tours. We make sure that no one wanders off, make sure no one touches any formations and to generally keep the group moving. With 17 – 20 visitors per tour there is no way the guide can see what is going on at the back of the group. The other part of the job is to evacuate anyone that needs to get out of the cave ASAP. This is usually due to claustrophobia, trouble breathing (the cave has 99% humidity and feels like 80 degrees) or crying babies. In my now 30+ tours I have only ever had to bring one person out and that was due to his being lightheaded. Once he was out in fresh air he was fine. Kathy has had to bring people out twice once due to claustrophobia and the other a baby that would not stop crying. We both LOVE the job as we get 2 free cave tours a day and always see something new. I am already hoping to come back next winter to be a cave guide.

Our fourth day of work can be 2 more tours as trailer, man the front gate, work the visitor desk in the visitor center or Portal. The tours take about 1 1/2 hours each and you need some time between tours for a snack, visit the rest room and to rest your feet. However, once you have done your 2 tours you are done for the day. The front gate, visitor desk and Portal are usually really 5 hours. I have done a morning at the front gate and one at the visitor desk. Kathy usually does 1 morning a week at the gate. The only thing about the front gate is it starts at 6:45 so that you ready to open at 7 AM. This generally means raise the flags and make sure the gate is open. We both think it is silly as the only people we ever see before 8:30 are park employees coming to work. Visitor desk starts at 7 AM but, again there weren't any visitors until after 8:30. Portal is basically being the doorman for the cave. You let groups into and out of the cave. Although it is scheduled as 8 -1 and 1-6. It really is when you go up with the first tour or come down with the last tour. One day I worked the Portal and the first tour didn't go up until 10 AM. So far neither of us had worked longer than 4 hours on days we do the Portal. The real job of Portal is to be there to take care of anyone that have to come out of the cave and get them on a tram ride down the hill to the visitor center. So far I have never had anyone come out while I was doing Portal.  Kathy has only ever had 1 person come out while she was a Portal. With both Portal and Front Gate if there is a lull you just read.

We lost a day off due to an all day mandatory CPR and First Aid certification class. On a different day we did a 6:30 am in the Cave Emergency Training class. Mostly, what to do if someone faints or has a heart attack. How to notify the EMTs to come and how to identify where in the cave you are located so they know where to come in the shortest possible time.

Our Lower Volunteer village has 11 sites. We get together about once a week for a Happy Hour campfire if the winds allow. We have had 2 couples leave, so there was a going away social at a local pizza place. The replacement couples arrived this week so, of course, there had to be a welcoming happy hour campfire.

One of the couples that left, arrived here a day before us and were staying until April 15th. Their son was in a horrible car accident while on business in Texas. So this couple went to be with him in Texas. We wanted to extend our stay here another month; so when they left we took their slot for March.

Our most famous visitors were Al & Kelly of the Bayfield Bunch. They are snowbirds from Ontario, Canada. Winters in Arizona and summers in Ontario. 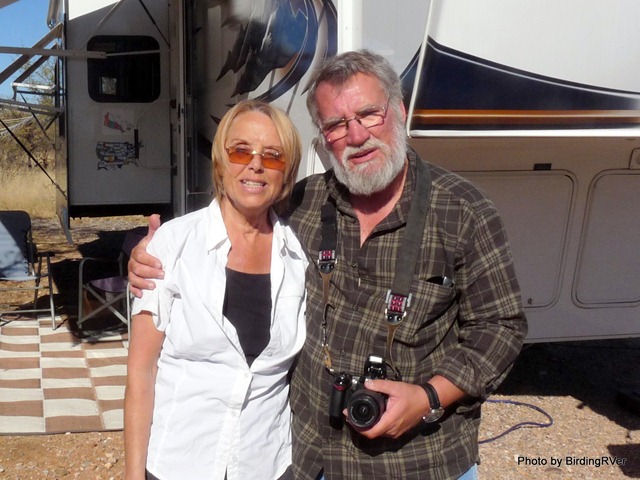 Al is one of those remarkable bloggers that blog EVERYDAY!  His blog is so popular that he has has 430 register followers and hundreds more unregistered followers. His site has also had over 480,000 visits. 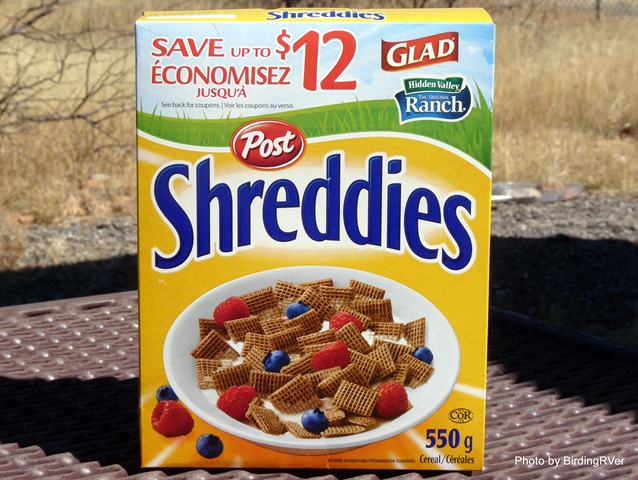 Shreddies is the breakfast cereal that generations of Canadians have grown up on. It is sort of a malty Bran Chex. Although Canada will export all of the oil we could ask for they don’t export Shreddies. I am forced to conclude that Canada views Shreddies as more precious than oil. Each time we go to Canada I try to bring back a half a dozen boxes of Shreddies. Unfortunately, I have long since eaten all of the Shreddies I brought back from our 2010 trip to Canada. I had written to Al this past fall to tell him that I was out of Shreddies and asked if he could bring some when he came south this winter. He took pity on me and came by to delivered several boxes of Shreddies.

Back in 2010 we met Ron and Carolyn Ancell in Bar Harbor, Maine and then met up with them again in Halifax. They live in Tucson in the winter. Carolyn is a professional harp player and they came by to give us a copy of her latest CD. We had some great happy hours with her playing harp in the background while we were in Bar Harbor and Halifax.

We also had Montana Owners.com visitors. Montana Owners.com is the owners club for Montana 5th wheels. Every winter there is a major Montana Owners rally in Quartzsite, Arizona. Once this ends the various attendees start migrating around Arizona. Several landed in Tucson. One day Butch and Susan Youngren, Don and Claudia Moore. and Ray Howard came to Benson to have lunch with us. Always good to get together with fellow Montana Owners.

About 20 miles south of here is the town of Sierra Vista and next to it is the Fort Huahuca Army base. It has been an Army base since 1877. When the cavalry was actively chasing Cochise around this area. Today it is the headquarters for Military Intelligence. They have museums for both parts of their history. The local paper writes that Fort Huahuca has trained over 19,000 drone pilots.

Like I said we have been busy but have managed to do a little birding and are now up to 26 species seen here at the park. We also took a trip to Whitewater Draw. It is a well know birding spot because there are thousands of Sandhill Cranes that winter there. WE DIDN'T SEE A SINGLE Sandhill Crane!!! Whitewater Draw was just a giant mud puddle. Since we took a scenic loop to and from Whitewater Draw our day trip was a 140 mile round trip.  We did see a Sora, Common Gallinule, Green-wing Teal, Cinnamon Teal and Northern Shoveler. There were also two Coyotes jumping around in a field near by. 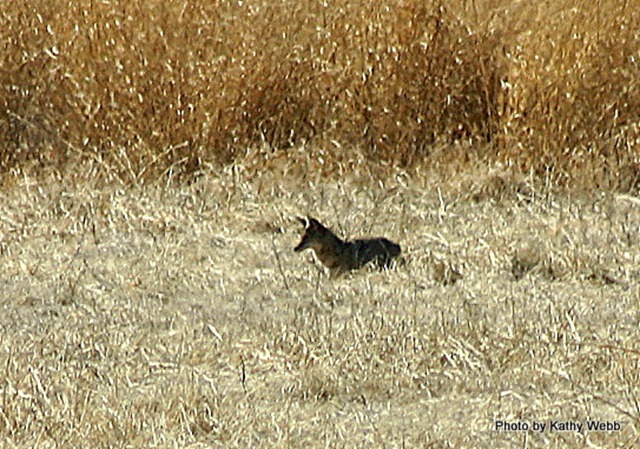 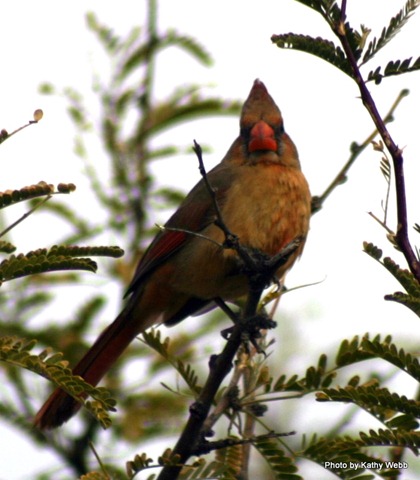 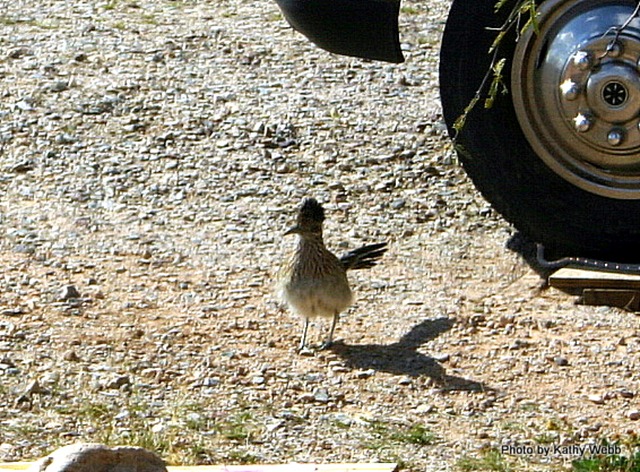 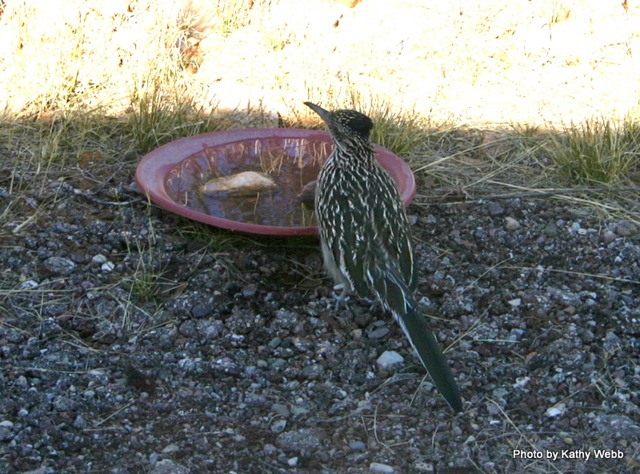 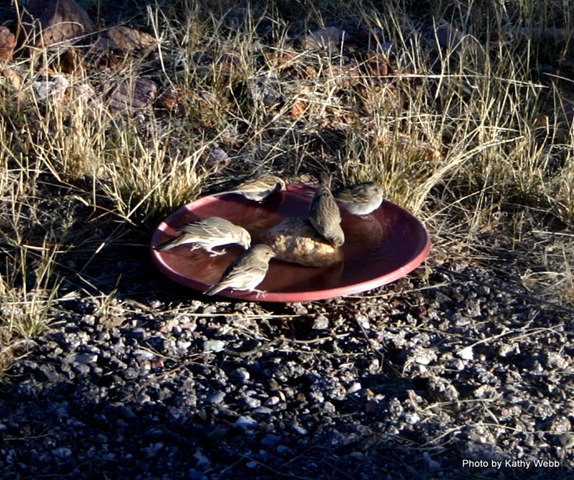