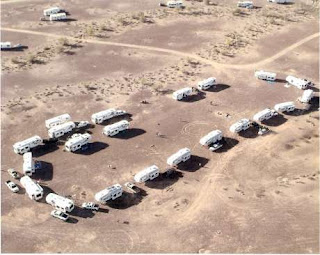 The above picture is our Montana Owner’s Circle taken from a powered hang glider. As you can see some people had left, but this was most of the group. (We are 4th from the right).

Quartzsite has changed since the weekend. We had serious rain for most of Sunday and high winds for all of Monday. Some of the group left on Sunday because they had schedules to keep and one couple left Monday in the wind. All around us similar groups are breaking up and although there are still plenty of RVs around, the desert does look less crowded. Seventeen of us (nine trailers) decided that we didn’t need to be anywhere so we are staying, waiting out the weather. These were good days to read, watch a move, take a nap and for Kathy to do some beading. We hadn’t driven anywhere since Saturday morning when I got more gas for the generators but Tuesday we drove to Blythe California to get groceries. Yesterday had beautiful weather but, there are wind advisories for today. Today it is laundry day and it looks like tomorrow our group is scattering in all directions.

Carl Youngren did a wonderful writeup for the Montana Owner’s forum of what the past week has been like here at Quartzsite so I have copied it here to give you an even better idea of life in Quartzsite.

“One of the major attractions of Quartzsite is the RV show (what – you thought it was the dirt and the wind?). They have the largest tent I have ever seen (look at the Quartzsite web site for an aerial photo of this puppy) which houses most of the vendor booths. Then there is the surrounding area outside where even more vendors have display booths. The show draws people from Phoenix, Yuma, San Diego, and Los Angeles besides all of the RV’ers camped in the desert. Needless to say, it can get crowded on the weekend when it opens. The experienced folks (that would be us) know to avoid the place until Tuesday or Wednesday at the earliest unless you really enjoy “close” company. This picture was taken on Tuesday, and while still crowded, doesn’t even begin to compare to the weekend. 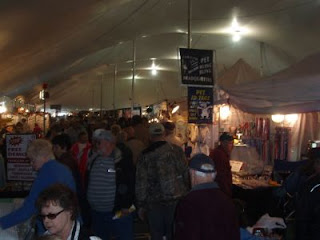 While waiting for the out-of-towners to depart, the group found other things to do. The ladies decided the provided lanyards for the badges were not up to their standards and they needed to do something about it. So after a trip into town to acquire supplies, they gathered to make beaded lanyards. The competition was hot heavy as everyone employed their own style and design in creating the “perfect” lanyard. 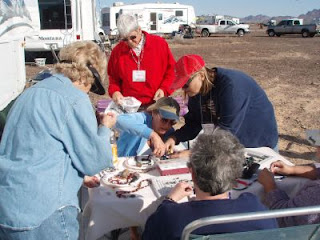 Here is a large sample (some folks had left before we got a picture) of the final results demonstrating the varied styles and designs. 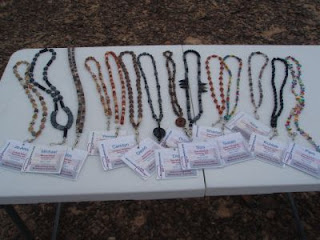 This was the first ever boon docking experience for a number of the campers (SREIGLE, PARROTHEAD, JH Sechelt, JJPARKER, David and Jo-Anna, BirdingRVer and maybe others). All of them seemed to enjoy the experience. But Grant and Kathy (BirdingRver) *REALLY* got into it. Grant had two brand new Honda 2000i’s and a Parallel Kit that had to be assembled (something about the microwave oven being integral to their survival necessitated the two Hondas). 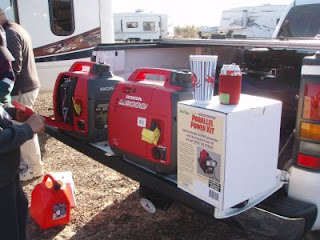 Once Grant had power, he discovered he just had to have another survival necessity, Direct TV. Sure enough, in Quartzsite, the vendor is very knowledgeable about installing in a RV (try getting the same results using the 800 number) and they come to you. 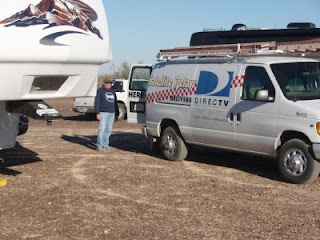 Apparently, Raider (the Golden Retriever) shakes the trailer when scratching and was disturbing their Honda powered Direct TV experience. So the next step was to add a set of JT Stabilizers. Actually, a number of Montana owners besides Grant acquired stabilizers during the week. And like Direct TV, the JT installers would come to where you are in the desert. 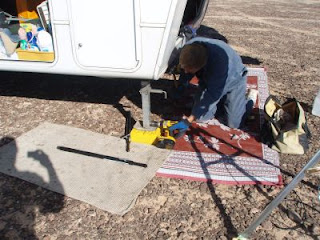 This is BirdingRVers first time boon docking and they figured they would stay for a day or two (at most according to Kathy). Well, it has been a week now, they are still here, and they may stay a while longer once they find the Laundromat in Q. I think they are having a good time. They even like the coyotes waking them up at 3:30 AM.

As you knew, or have figured out by now, this boon docking stuff is basic survival mode. Always a topic of conversation and interest is food. What have I eaten, what will I eat next and what great meals have I had in other locations are popular topics. The restaurants in Q are mediocre to awful at best.

We are a sympathetic group who look out for each other. This includes ensuring everyone gets enough to eat. What better way to ensure everyone adds a few unneeded pounds than to have a potluck! So on Thursday, despite the threatening weather (which turned out to be sunny and warm), everyone pitched in to ensure the survival on the species. 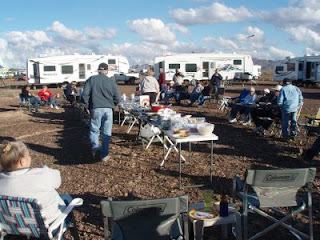 The final organized adventure was the “Open House” for any Montana owners in the Quartzite area. There are a surprising number of us out here in the desert and it was great to meet some of them. Did I mention there was food involved? But you knew that. 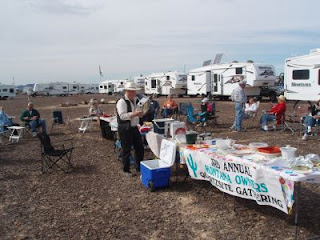 One attraction to camping is the evening campfire. And we had one every night. Normally, the first one to finish dinner would come out and start the fire. As the others finished, they too would grab a chair and sit around the fire. As the week progressed, it seemed the fire started earlier and earlier each night. Perhaps it became an extension of cocktail hour or folks were eating earlier. In any event, you can tell it isn’t dark yet (nor is it cold) in the picture. But there is the hard core crew tending the fire so the rest of us will have it to enjoy. 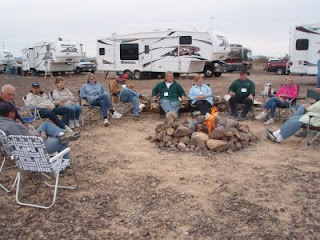 Unfortunately the time flew and it was Sunday – departure day for many. It is always sad to have to say goodbye, and the weather contributed to the mood. It had started raining just after midnight and it proceeded to spit and dribble all morning. Wet, grey, and ugly with a touch of brown mud made loading up no fun. Most got out without incident, but not Dennis (DENNIS AND CAROL). He had the unfortunate luck to find a prairie dog estate that looked solid until you placed seven tons of equipment on it. " 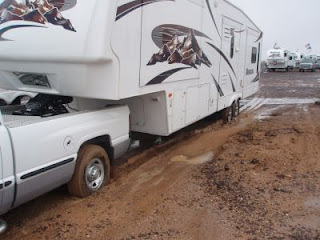 A Bird note: We were able to add Raven and Horned Lark to our Quartzsite list.

Posted by Grant and Kathy Webb at 7:53 AM