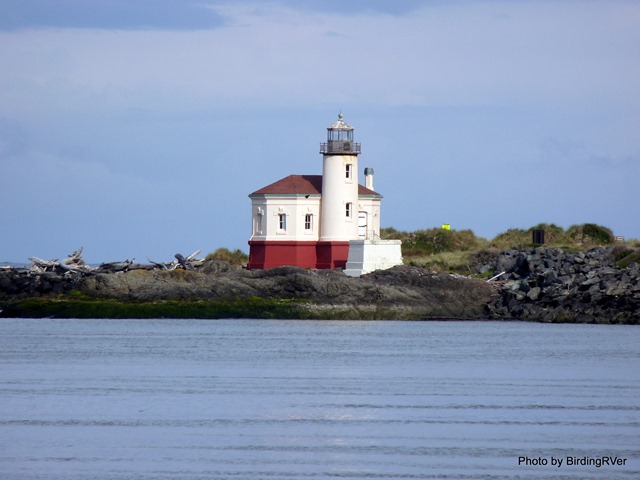 The rain has cut way down on our bird walks and attempts to get in 10,000 steps a day. Traffic at the Lighthouse has been less than in past weeks. When it is raining no one comes to the lighthouse. If there is break in the rain a few people come to visit. One of the great things about volunteering at this little lighthouse is that it sits next to a jetty and the mouth of the Coquille River. With the wind blowing and the rain coming down it is a very dramatic location. We can watch waves breaking over the jetty, huge waves hitting the beach and waves hitting the rocks at the base of the lighthouse!

After 4 years and 5 months we had our first drop-in blog reader visitors. Last year when we were here a couple came to the Lighthouse and asked for us on a morning we were working the afternoon shift. They were heading down the coast and couldn't come back when we were on duty that afternoon.

This week, when we were working the morning shift a couple came by in the afternoon asking for us. This time the couple were staying here in the park campground. The other Lighthouse couple directed them to our site. Just as we were sitting down to dinner there is a knock on the door.

"Hi, we are your blog followers and are also Escapees and Boomers.” It was Keith & Brenda Krejci from the Damn Near Perfect Couple blog.

Rather than stand around outside with the mosquitoes and let dinner get cold, I suggested that we meet for breakfast to chat.

We met for breakfast the next morning with Keith & Brenda  and had a nice chat about all things RVing and Volunteering related. They have been RV fulltimers for over 6 years and have done a lot of volunteer assignments.

That afternoon friends Gordon & Juanita from the Seeing the USA in our Chevrolet blog came by to visit at the lighthouse during our shift, shortly after that Keith & Brenda arrived. It being the small world that RVing seems to be, Keith & Brenda read Gordon & Juanita's blog but had never met them until then. They noticed Abby, the beagle waiting patiently at the door, which got the ball rolling of who they all were!

These Oregonians are tough, so even with the threat of rain this weekend, the park, as expected, was completely full for Memorial Day Weekend. Lots of kids and family reunions. It was a very busy  weekend for Bullards Beach State Park in general and especially so for the Lighthouse.

We had a number of people young and old say that they had never been in a lighthouse before. Also several people told us how fascinating the stories and history of the lighthouse were.

Since we had been through this busy holiday weekend last year we took it all in stride. Now that the holiday crowd has headed back home, the park seem so quiet.

Most notable were our first of the year: Cedar Waxwing, Bewick's Wren and the Swainson's Thrush

Posted by Grant and Kathy Webb at 3:15 PM