Second week back at Bullards Beach State Park May 2012 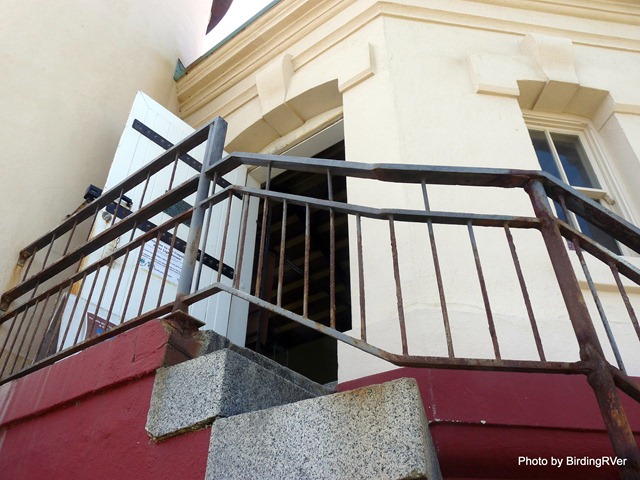 The door to the Lighthouse.

Since Monday is our day off, after breakfast we headed out to check some of the local spots for shore birds. We went to the south jetty where the Coquille River meets the ocean first. Since there is beach, the river and the ocean this is where we saw the most kinds of  birds. Along the cliffs that make up much of the coast in this area, there are several State Park Waysides. We stopped at all of the waysides that are close to Bandon. Coquille Point with large sea stacks just off shore and nesting birds, is probably the most visited wayside as it is closest to town and for shear number of birds. A little further down the road is Face Rock Wayside. Face Rock is probably the most scenic and on this day had the largest number of shore birds. Still further down the road is Devil’s Kitchen and China Creek Wayside.  One thing every site had was A LOT of WIND. China Creek is also where the very endangered Western Snowy Plovers nest and is the site where the “Plover People” John & Sue and Michael & Diana spend most of their volunteer time educating the public about the Snowy Plover nest and trying to keep dogs and people out of the nesting area.

The afternoon was spent doing laundry. Just as the laundry was finishing up in the dryer we got a call from John & Sue. They were at China Beach and had a Red-necked Phalarope hanging out in the creek close to there location. As soon as the laundry was done we headed back to China Creek. The Red-necked Phalarope was still there in the fresh water creek huddled out of the wind against the bank of the creek. Although, the bird was mobile his odd behavior made us think that he may have been sick or injured.

Tuesday is another day off. We started the day by walking the campground loops and visiting the boat ramp looking for birds. We saw pretty much the “usual suspects”.

Traveling friends Gordon & Juanita from the blog Seeing the USA in our Chevrolet are spending there third summer in Port Orford, Oregon. If you have been reading our blog for a while you know that we first met Gordon & Juanita in Alaska back 2008. Between emails, blog entries and the fact that our paths cross occasionally we have managed to keep up to date on each others lives. Also in Port Orford is a restaurant called the Crazy Norwegian’s Fish and Chips. Last summer we had one of the best Crab Sandwiches you could every hope for and the absolutely best Fish Tacos I have ever had.

Obviously, we had to go to Port Orford to have lunch with Gordon & Juanita at the Crazy Norwegian. They still have great Carb Sandwiches and Fish Tacos.

After lunch we went over to Gordon & Juanita's summer home. This is a small but very friendly RV Park with many people returning year after year. While we were at Gordon & Juanita's their beagle, Abby,.must have known I needed a puppy fix. She jumped into my lap, put her paws on my chest and stared at me with her big dark eyes.

Wednesday was our first “work day” with the Lighthouse opened to the public. The wind was blowing strong from the north when we opened the Lighthouse at 11 AM and got stronger as the day progressed. It wasn’t a very busy first day but, considering the wind and that it was mid-week in early May, 15 visitors seemed about right.

Not long after we were done with our shift at the lighthouse. John & Sue came by to pick us up for a trip to Coos Bay. There we were joined by Jim & Barb. They are volunteers at Simpson Reef that I wrote about in the last blog posting.

Visiting Coos Bay were the Tall Ships Lady Washington and Hawaiian Chieftain. The Lady Washington is a replica of a 1787 merchant ship. The Hawaiian Chieftain is a replica of a 19th century trading ship. These 2 ships travel the west coast offering sailing trips and tours at various ports in California, Oregon and Washington. None of our schedules would work for a sail trip so we went for a tour.

After touring the ships we went to a near by German Restaurant that Jim liked called the Blue Heron. I think we all had a different item but, all came away happy and full.

We next went to a meeting of the Cape Arago Audubon Society. It has been a few years now since Kathy and I attended an Audubon Meeting. The presentation at the meeting was from a local Birder that set a new Oregon Big Year Record. Russ Namitz saw 381 bird species all in Oregon and all in the same year  beating the previous state record of 363. The statistic that amazed me most was that he drove 41,000 miles in pursuit of this record. That is more than one and half times around the world without leaving Oregon. 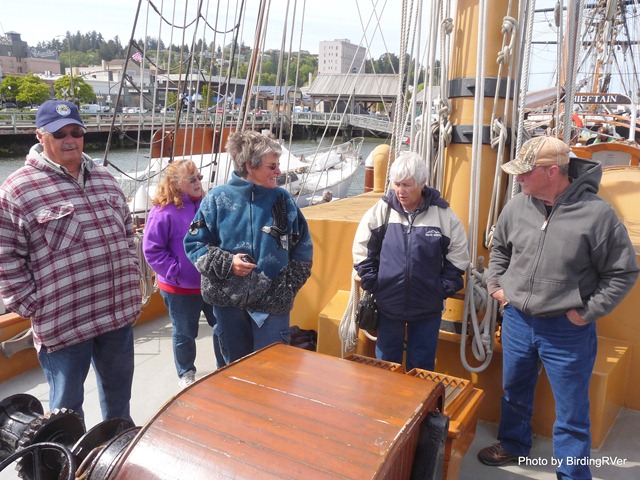 Our “crew” standing in the cold 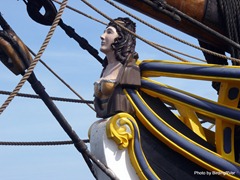 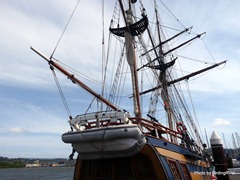 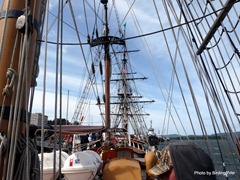 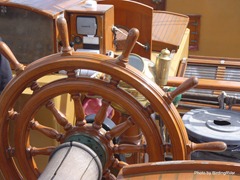 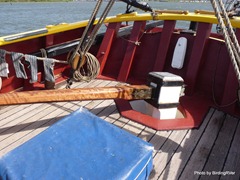 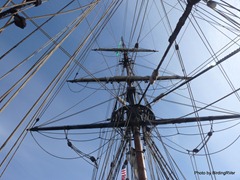 Today we opened the Lighthouse early for the annual visit by the 5th graders from Melrose Elementary School of Roseburg, Oregon. This is the 34th year they have had a field trip to the Coquille River Lighthouse. The teacher told us that he had been on this field trip at the same school when he was in 5th grade. This school group is very well organized and they are really good for 5th graders. They are however noisy. All sounds just echo in the lighthouse. Our total visitors for the day was 75. All but, 10 were with the school group.

We didn’t go for a bird walk or walk the campground loops today. After our busy morning, we were wore out! I went home a took a hour and half nap.

Weather: Clear and only half as windy as yesterday. Wind 15 mph, Wind gust 20 mph

Today we had a quieter day at the lighthouse. We had 17 people total for our shift and they seemed to come in a continuous but not hectic pace.

After working at the lighthouse we got groceries.

After putting away the groceries we walked the campground loops and visited the boat ramp. We found 4 Western Grebes, where up until now we have only seen one grebe at a time. Also the Pacific Loon has found a friend.

On our way back to the trailer we stopped by to have a glass of wine with John & Sue and start planning our Tuesday Bird trip.

We had 50 visitors at the Lighthouse, a typical number for a beautiful Saturday on the coast. The visitors came in a nice steady stream so it never got to be overwhelming and the time flew by. The river was full of fishing and crabbing boats, so there wasn’t much bird activity.

Posted by Grant and Kathy Webb at 9:41 AM