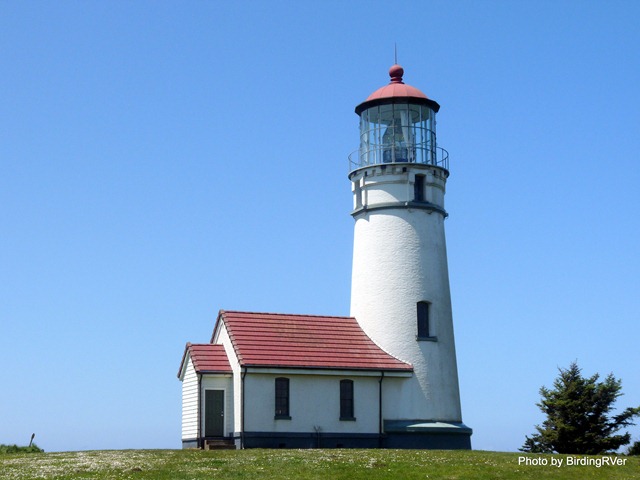 This is a picture of the Cape Blanco Lighthouse taken last year before it was painted this past fall.

If it’s Tuesday it must be Birding Day with John & Sue. They picked us up and we headed to the Great Egret rookery on the Coos River that I wrote about back on May 6th. This time however, we stopped at wide spot in the road behind but much closer to the rookery. There were still several pairs sitting on eggs and also a few baby Great Egrets that had hatched. The beaks are amazingly big for such a small bird. Unfortunately, we were looking through a lot of leaves and just could not get any decent pictures. (Who brought the pruning shears?!)

Our next stop was Millicoma Marsh near Coos Bay. We had fantastic weather and great birding. John & Sue were able to add two birds to their Life List. We ended up with 29 species for the day and most of them were from Millicoma Marsh.

Wednesday and Thursday we worked the afternoon shift at the Coquille River Lighthouse. As expected after a 3 day weekend, the mid-week crowds were small. Wednesday was a continuation of Tuesday great weather and Thursday started out the same. However, as we drove out to the lighthouse we could see the fog bank coming up the river. We were shocked by how foggy it was at the lighthouse. It was undoubtedly the foggiest we had ever seen at the lighthouse. The fog was so thick that we could not see across the river, nor to the end of the jetty. No doubt this was one of the reasons that the number of visitor on Thursday afternoon was very light.

Friday was the 1st of the month, the day when Volunteers are on the move. It is a sort of choreographed thing. We had to move out of our site so that our replacements can move into it and still have time to get to their orientation.  Then we had to get to our next site in Cape Blanco State Park and hope that whom ever we are replacing has moved out. Then get unhitched and everything connected in time to get to our orientation.

We had the morning shift for Saturday, it was a light crowd, so we had time to settle back into Cape Blanco Lighthouse routine. Fortunately the weather had improved from Friday evening, what fog there was moved off quickly and we had high overcast clouds, However, underneath the clouds we could see for miles. One thing for sure is that Kathy, definitely spent too much time at the Gatehouse at Kartchner Caverns State Park. Twice she welcomed people to Kartchner. LOL (Editor’s note: she was getting hungry and punchy! Where are we now?!)

What a job! Work a day and then get 3 days off! Just the way the schedule happen to work. Sunday as we were getting into the truck after church in Port Orford we saw our friends Gordon & Juanita’s truck go by. They saw us as well, Gordon did a U-turn and they stopped to chat. As I have written in the past Gordon’s other name is The RAIN MAGNET! It started to rain while we were talking and continued to rain all of Sunday and all of Sunday night. Yes, if your are wondering it is STILL RAINING so far all day on Monday.

Rain or shine if it is Monday morning it must be the Volunteers Breakfast at a local diner. This morning we had 17 people show up for breakfast. These are most of the volunteers from the several Oregon State Parks in the area around Port Orford. It is always great to meet other volunteers and compare notes on places they have or plan to volunteer.

Posted by Grant and Kathy Webb at 1:59 PM