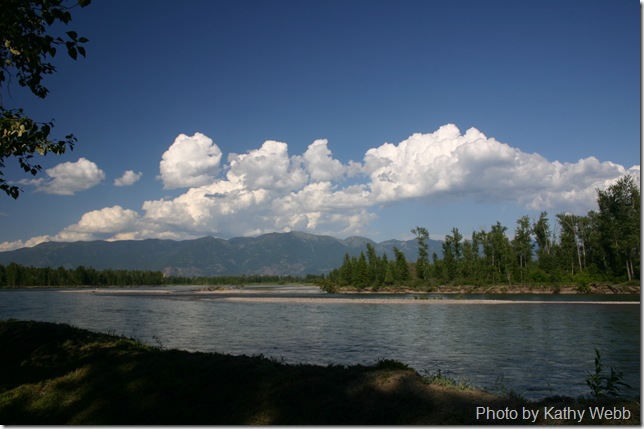 The Flathead River behind our trailer in Kalispell, Montana

I once read where retirement was described as “a week full of Saturdays”. Consequently, we and most of the retired people we know don’t know what day of the week it is and are even less likely to know what day of the months it is. That coupled with the fact that we try to never make reservations. Left us with the twins surprises of it being almost the 4th of July long weekend and we didn’t have a place to stay. We knew that all of the RV Parks and State Campgrounds in the area were full for the weekend. After a almost a month on the Oregon Coast we decided to head inland and save the Washington Coast for another time. We headed east to I-5, then north into Washington and then east Highway 12. This took us to the southern approach to Mt. Rainier National Park. Like most National Parks, Mt. Rainier doesn’t have campsites big enough for a 35 foot trailer and of course all of the RV Parks in the area were already booked. We continued toward Yakima, Washington.

After the Oregon Coast and the rivers and lakes of the Mt. Rainer area, Yakima was quite a shock! It is a very dry desert area and much hotter. The first RV Park we tried there was full on a Tuesday and we had to settle for a very old RV Park near the interstate.

The Spokane River with Lake Coeur d’Alene in the background

We continued east toward Spokane, Washington and Coeur d’Alene, Idaho. This time we called ahead as we drove and found a site for one night at the Blackwell Island RV Park. This a beautiful park on the Spokane River. We instantly decided we wanted to stay a week, but the lady behind the counter said “No, chance!”. We were able to get two nights but only if we agreed to move to a different site each day. This is rightfully a very popular park located right where the Spokane River leaves Lake Coeur d’Alene and near the sight of the city of Coeur d’Alene fireworks display. People book this location a year or more in advance to be there for the 4th of July weekend. As we were heading to our site we were chased down by a very enthusiastic work camper. It was Randall Voeller, we had met Randall and his wife Regina in San Jose last December when they were work camping at Coyote Valley RV Resort. Like us they are ex-Californians that full time in their Montana 5th wheel. The four of us went out to try a new Mexican Restaurant in Coeur d’Alene. Along the way they gave us a tour of the Coeur d’Alene/Hayden Lake area. Over dinner we caught up with what we had been up to the past 6 months and they told us of their time work camping. Although they started full timing with plans to travel they can’t break away from summers in Coeur d’Alene at Blackwell Island. We can understand why! 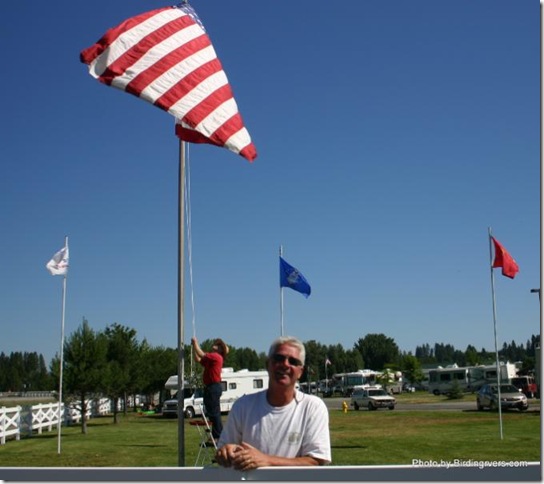 We managed to get a picture of Randall but, not Regina 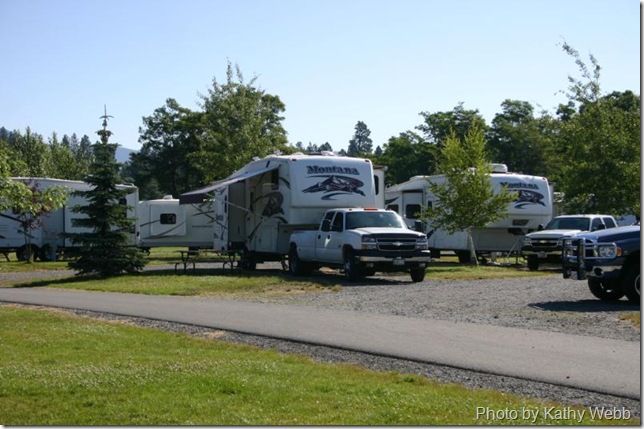 Coeur d’Alene is a beautiful area, we hope to be back soon to stay a while. Unfortunately our two days went by very quickly and we had to move on, but had nowhere to go. We started working the phones to get a reservation for the 4th of July Weekend. We finally, found a water and power only site in Kalispell, Montana about 230 miles from Coeur d’Alene.

A view of a very small section of Flathead Lake we passed along the way.

Our site here in Kalispell is one of the nicest we have every had with the Flathead River flowing past the picture window at the back of the trailer. After traveling as little as 100 miles per week for the past month; we have now travelled almost 700 miles in just the past few days. We are extending our stay in Kalispell for at least a week and may stay in this part of Montana for several weeks. 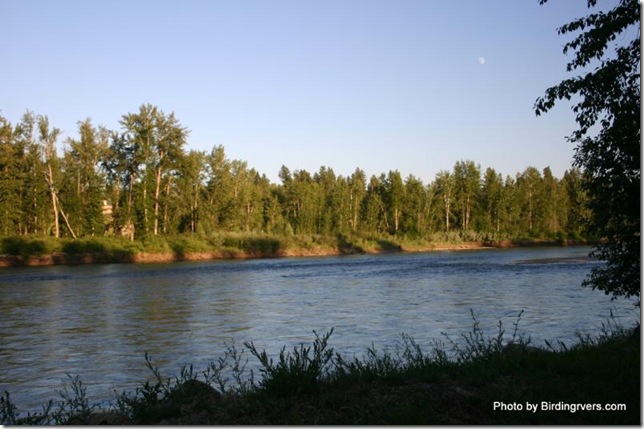 Looking downstream from our site.

Note: All of the pictures in this blog entry were taken by Kathy.

Posted by Grant and Kathy Webb at 2:01 PM