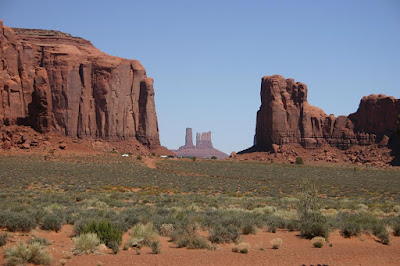 I can't believe we're here in Monument Valley. I've only dreamed about coming here for over 36 years after Grant did a photography tour here in 1972!! GORGEOUS Country with all of the buttes and red/orange sand. The main place to stay is at Gouldings, which started out as a Trading Post in 1924. When John Ford found out about the wonderful scenery here for filming westerns, the lodge became quite famous with all of the movie stars staying here. Now it is a huge hotel, restaurant, gift shop and the trading post is a museum to the film industry. Plus the RV Park is a part of the lodge, and just up the canyon behind it. This is a very scenic park, it has the "IT Factor" for sure! It is so quiet without any highways or railroad tracks for miles! Since it is a canyon, we can't use our Verizon Air Card for the computers. However, the wifi is very fast and inexpensive! We can see the antenna up on top of the butte near us! :-)
It had been a very long and harrowing day getting here, so we opted to have dinner back at the lodge. The restaurant sits up high overlooking the valley and the meal was delicious. Our first taste of indian Fry Bread. It was very light, almost a pastry batter, and tasty. Dinner with a Million Dollar view, what could you ask for?! 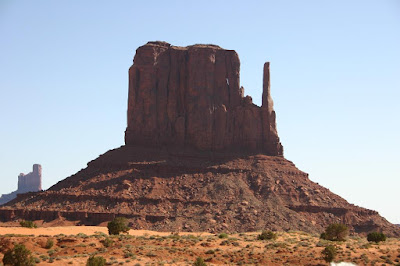 Since Monument Valley is on Navajo land it's not a national park, you are only allowed in with a guide.Through the Lodge, we arranged to go on the 3 1/2 hour Native American Guided Tour of the valley on Thursday. The fee is $50 per person, pricey but a priceless adventure. Rosie our tour guide was a kick, with a funny sense of humor! She even shuttled us at the campground and then picked up the rest of her customers at the hotel. It's a dually pickup with a custom made bed that seats at least 24, with a plastic wind screen all around. Were we glad it did! The temps were in the low 40's at 8:45 with the wind howling around us, but it was warm inside. The roads inside the reservation are not paved. Grant was glad it was not his truck going up and down the washboard, sand laden road! She navigated the potholes like a mountain goat, so no spine adjustments were needed afterward! We had several stops for photo ops and just to "ooh and awww" the place. There are several arches in there with some incredible rock formations. She gave us a history of the area, which was really fascinating. This land had been held by the Navajos since the 1200's, one of the few Native American people to keep their land!
At one point we came up the hill and were about to go down the other side, when Rosie said, "Are your eyes closed?! Mine are!" I'm sitting up front on the far right side, so I'm beyond where the cab door is, I can't see the bottom of the hill! Kawabunga!! After a couple of hours of bumping around I asked her, "are there any rest room stops in the near future?!" She said with a grin, "they're everywhere, just pull up behind a bush or a boulder!" Navajo humor! A few minutes later we came to a rest area with Porta Potties and several of us were greatly relieved! :-)
We stopped at a hogan for various Navajo culture demonstrations. The inside of the hogan looked larger than the outside with some intricate woodwork to frame it, the outside being mud. Lucy, a sweet grandmotherly Navajo, gave us a demonstration on Navajo rug weaving, corn milling and then asked for a volunteer in the crowd for a demonstration on maintaining long hair. Nobody raised their hands, since most of the ladies had short hair. So I kind of pulled my hair out of the headband and asked, "me?" She used a comb, made of thick fibers and proceeded to weave it into a bun with some yarn. Perfect, now my hair won't be blowing all over the place all day!
It was an exciting tour, I never dreamed we'd get to see so much! 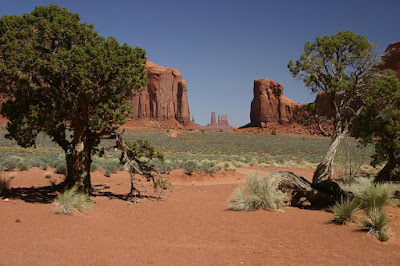 Our campground has 4 other Montanas here. We recognized one Montana, owned by a couple we met back in January at the Quartzsite MOC Rally, Steve and Vicki. Apparently they had come by while we were gone and left a note to say "Howdy". After the tour we stopped by their beautiful 3400 model to say "Hi". We had a nice chat comparing notes as to where we all had been since January. They told us about several side trips from here, among them Goosenecks and Valley of the Gods State Parks. So maybe we'll be here a few more days to see more sights!
There's so much snow up north, nothing wrong with a couple of days lingering here!

As always it was a windy day with a lot of dust in the air however, here is the URL for the slide show of our visit: http://s292.photobucket.com/albums/mm16/BirdingRVers/Monument%20Valley/?albumview=slideshow
Posted by Grant and Kathy Webb at 8:02 AM