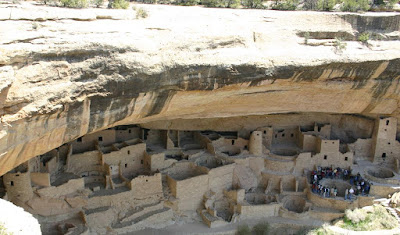 Tuesday the wind died down so we left the red rocks of Monument Valley behind and traveled northeast up near the Four Corners area. That is where Arizona, New Mexico, Utah and Colorado meet. We could see Shiprock, (noted in most of Tony Hillerman’s mysteries), in New Mexico as we were in Utah, crossing the border into Colorado.

We picked the KOA in Cortez, CO since it is closed to Mesa Verde National Park, in fact that is the view we have out the back window! An hour's drive east of here is Durango and we've always wanted to ride the Durango Silverton Train. However, they don't start the summer run to Silverton until May 4th, but they do a half run from Durango up the Cascade Canyon.

Wednesday we went up to Mesa Verde National Park. For Kathy it was like stepping into one of her dad's paintings! It is quite a scenic drive up the mountain, with switchbacks in the road, something Colorado is noted for. It is so steep and narrow no trailers are allowed up it. The scenic overlooks were like being in a plane looking down on the farms of Cortez and Mancos. First thing on the agenda was to get to the Visitor's Center and get tickets for the Cliff Palace tour with a ranger. That was at 1:00, it was 11:30, time enough to have a nice lunch at the grille down near the cliff dwellings. It was such a nice sunny day we sat outside to eat lunch and enjoy the fresh air. By 12:30 we no longer needed the sweatshirts it was so warm.

Driving over to the area of Cliff Palace we got our first glimpse of the canyons where all of the villages were built. To our delight White-throated Swifts were zooming around the overlook onto the palace, the fly like bats! A bus pulled up with about 55 passengers for the tour, plus the dozen or so already waiting. We were worried when at least 45 of them were 6th graders, but they turned out to be very interested and well versed on the cliff dwellings. In fact, at several times during the tour Ranger Jose said they asked very smart questions.

The trail down to the palace is down a series of very steep stairs, and a ladder up to the main level. We had been warned there would be several ladder climbing situations. This ladder was made of very chunky wood rungs and a bit polished from countless other feet climbing it. Then all of a sudden, you're there, walking right up to the well preserved ruins of the Anasazi Puebloan Indians. They even had a spring that ran (and still runs to this day!) in the back corner of the complex. Some of the original beams are still visible, which is amazing in the fact that they left in around 1245 AD. The beams are almost a thousand years old!

Whenever you say the words “cliff dwellings” I think most people get a picture in their minds of the Cliff Palace here at Mesa Verde. 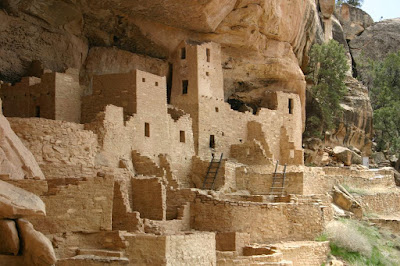 This park has been on my list of must see National Parks for as long as I can remember, no doubt from some picture I saw in a National Geographic as a kid. Mesa Verde has over 4,000 archeological sites and 600 cliff buildings. The area has been occupied since about 600 AD, but the cliff dwellings were only used from about 1,000 AD to 1300 AD. Although the builders of the various cliff dwellings throughout the Southwest have been know as the Anasazi, the new correct turn is “Ancestral Pueblo people”. At its peak they estimate about 5,000 people were living on the mesa both in cliff houses and stone houses built on the top of the mesa and that there may have been another 30,000 people living in the surrounding area. These people are part of the same culture that built the cliff house down in Arizona and New Mexico. For some unknown reason all of these site were abandoned about 1300 AD. The current theory is that there was a prolonged drought in the area.

Mesa Verde has been a National Park for over 100 years. That coupled with the difficulties of actually getting down the cliffs to the ruins has meant that they are mostly in pretty good condition. Today all access to the cliff dwellings is on ranger led hikes only and access still evolves walking some very steep steps and climbing ladders. The ranger led trips are no doubt necessary to protect the sites, but our group of 60 seemed too big. The ranger said that he has done summer trips of 80 people. The Mesa Verde plateau is at about 7,000 feet so, there is still snow in some areas. The park opens in sections, part is open now, part will open this week and a third part won’t open until Memorial Day weekend. As usual we stopped at every overview and road side exhibit that we saw.

Between the two of us we took 160 pictures while at Mesa Verde. Here is the link to the edited slide show of our visit: Our trip to Mesa Verde National Park