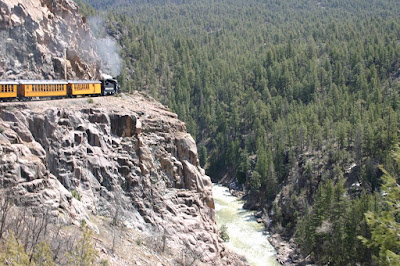 Having seen the Durango & Silverton Train ride on several Travel shows, we just had to see it for ourselves. It's an hour's drive east of Cortez, however, they are running on the winter schedule this week, which only goes half way up to Silverton along the Cascade Canyon. I called up to see if we could get tickets for Friday morning and there was no problem. While on the phone with the train station, I inquired if there were any kennels nearby they could recommend. Right away they gave me a number for a couple just outside town that takes in dogs and horses. Sure enough, they had room for Raider for the day at their Wonuka Farm, in fact, they'd even pick him up at the train station so we wouldn't miss our train. That is convenient.

Friday we woke to 24 degrees and a light breeze, but undaunted we all packed up to go to the mountains. As promised by Mrs. Bedford, they were at the train station! Raider nuzzled his way up to her and jumped right into their car in a flash. We on the other hand were like parents dropping off their first born at day care for the first time!

Off to the station, we picked up our tickets at Will Call and started taking photos right away. The steam engine is a Baldwin, for you train buffs, and it still uses coal. The ride goes through the middle of the town of Durango and then you're off along the Animas River. Lots of beautiful farms and ranches along the way, in fact we went by the Wonuka Farm where Raider was staying! Then it starts climbing up the canyon where the river has carved the rocks after years and years of snow run off! The mountains still had a very heavy blanket of snow on them, so there will be lots of white water running down river for some time now. 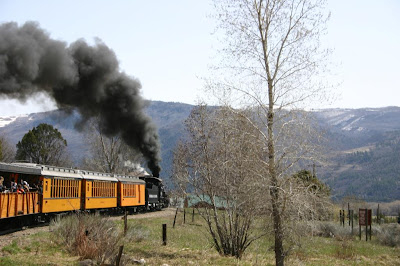 Anticipating a rugged ride on an old carriage car, we bumped along, rocking back and forth on the narrow gauge rails. There must have been at least 12 cars connected, with a parlor car at the end and a concession car for food and drinks in the middle. There was an open observation car for easier photo shots, which was excellent when we got to the steep cliffs of the gorge. The tracks wrap around the mountain which enabled us to see the engine chugging away, spewing its black smoke! It's a wonder in some places how the tracks stay on the cliff, with all of the landslides nearby!

Around noon we got to a nice place to have lunch and get the train turned around for the return trip. This picnic spot was right on the river with a suspension bridge across to walk over and take pictures. Then promptly at 1:00 it was "All Aboard" and back down the mountain we went. We kept thinking, "How do you slow a long train DOWN HILL?" Top speed is about 18 mph, so we weren't breaking any land speed records, but an enjoyable view down the gorge. 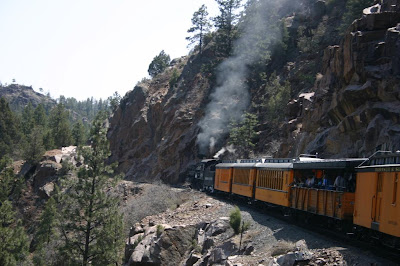 Coming back into town we stopped all kinds of traffic with the multiple train crossings, the town was quite alive compared to the early morning!

Following the very good driving directions, we found our way to the Wonuka Farm and our happy puppy! He was elated to see us but didn't seem traumatized at all by being left there! Besides their own dog, Shadow, the friendly Rottweiller, he was their only canine guest. He must've gotten to run around a lot, because he slept all of the way home back to Cortez. We practically had to wake him up for dinner!

Since Raider was such a happy camper when we picked him up, Kathy promised them a plug on our blog. This is the Wonuka Farm link: www.guesthousedurango.com/

The birding has improved a lot here at this park. We now have White Crowned Sparrows, Lessor Goldfinches, House Sparrows and some female Red Winged Blackbirds checking out our feeders. While walking Raider yesterday we spotted a flock of Yellowheaded Blackbirds in the trees near 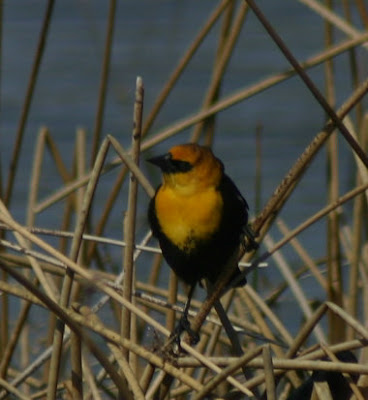 our hosts home and another flock down by the lake next door. It was so windy, of course that the birds were hunkering in the reeds down by the water. I managed to catch one curious Yellowhead pop up. On the lake are dozens of Canada Geese, Buffle-head Ducks, Common Merganzers, Ruddy Ducks and American Coots. Along the shores of the islands are Great Blue Herons,

Red Winged Blackbirds, at least a couple of Killdeer and 5 different species of swallows zooming by: Violet Green, Northern Roughed Wing, Barn, Tree and Bank Swallows. Up on the higher level we keep seeing a rather dark falcon, too small for a Peregrine, possibly a dark morph Kestrel, plus Red Tail Hawks. 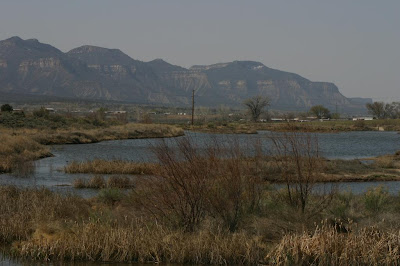 Posted by Grant and Kathy Webb at 1:47 PM