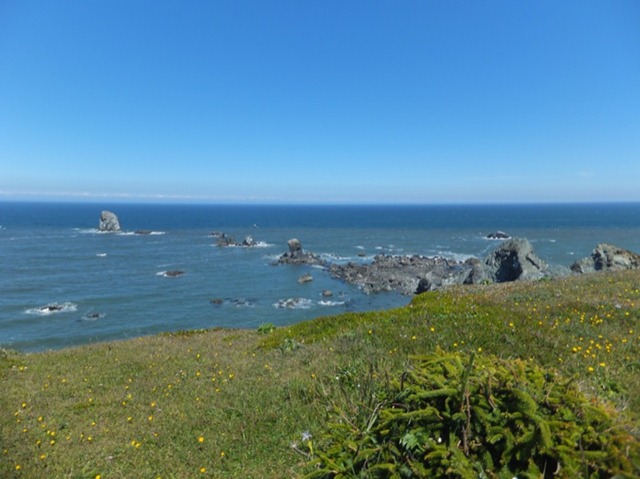 This picture of Blacklock Point was taken by Sue

Monday was again our day off so we headed to Bandon, picked up our mail and get groceries. We also stopped at the Bandon Fish Market for lunch. They have the best Fish Chips on the coast. They are made from Pacific Cod and come with very good & some how unique fries. We like them so much that we never ordered anything else from the menu. I learned the last time we were there that their Fish Tacos are also made with there awesome deep fried Cod. So, we both gave them a try and they were great. The weather was beautiful both in Bandon and Cape Blanco. After putting away the groceries we walked around the campground looking for birds.

Tuesday another day off. The day was mostly overcast so, we didn’t do too much, Kathy mostly beaded and I read. We did head into town to get this week’s laundry done.

Wednesday was a day off, because we get three days off a week but the third day off changes weekly. It was a beautiful day here on the coast. John and Sue picked us up for a Bird Hike (more hiking than Birding) to Blacklock Point. Oregon Live describes Blacklock Point as “No. 2 on list of Oregon's best landscapes”. The hike is 4 miles round trip through a mix of forest, bogs, grassy area until you suddenly breakout on to a cliff 100 feet above the ocean. With this mix of habitat there are a lot of birds and many flowers in the area. No doubt our best birds of the day was a pair of Peregrine Falcons. They must have had a nest near by as we saw them tearing up a kill to take back to their young. 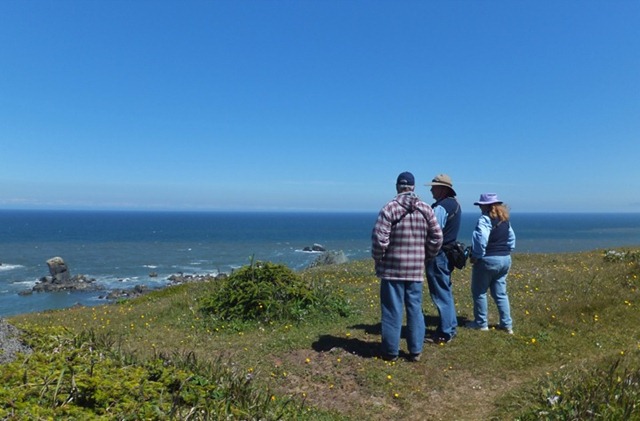 Sue took this photo of us soon after we arrived at Blacklock Point.

After completing our hike we drove up the Sixes River to a BLM campground to have lunch and look for more birds. The entire time we were there we could hear a Warbling Vireo singing in the trees near us, but none of us could ever locate it.

Thursday, yesterday’s great weather continued and we had our busiest day of the year so far at 238 visitors. Visibility from the top of the Lighthouse was incredible! Since we were so busy our time flew by. After our work day we walked down to the over look for Happy Hour. Although we tried we did not see any whales

Friday was foggy and it rained all day from before sun up until after sundown. The local rain gauge in Port Orford had 2 inches of rain for the day. It was also our “all day” shift. The fog was so thick at the Lighthouse that we never could see the ocean and frequently couldn’t even see the Lighthouse from the parking lot. Although we had nothing like the 238 visitors of yesterday, we did have 77 people come out in the fog and rain to see the Lighthouse. One thing about the fog it makes the Lens appear to glow as the light goes through it.

Saturday had a 60% chance of showers, but they never materialized and as the day went on the nicer the weather got. With the nice weather we had a return of visitors in droves to the Lighthouse.

Sunday was a beautiful day, the wind was pretty mild for here. We were off so after church we did a quick grocery stop and after lunch we went hiking around the park. There aren’t a lot of trails at Cape Blanco but you can string together some nice loop hikes. We didn't see many birds, but our best bird of the day was a Savanna Sparrow. We also went out to the overlook again for Happy Hour. This time we saw a pair of Gray Whales. They stayed around long enough for us to show them to some of the other Volunteers. Always exciting to see whales!

Monday was intermittent showers all day. We had our biggest crowd yet for the volunteers breakfast and for some reason the restaurant was the busiest I have ever seen it. I don't think there was an open seat anywhere. Since all of the Volunteers will be leaving next Sunday on the first of July, the main topic of conversation was “Where are you headed next?”. After breakfast we went to Bandon to get the mail, and groceries. The rest of the day was spent reading and beading.

Tuesday was a very mild clear day. We started to get some of the preliminary things done for our departure on Sunday. Most of the rest of day Kathy beaded in the sunshine and I worked on the blog. We headed down to the overlook to see any whales and weren’t disappointed! There were Gray Whales in close near the rocks and Humpbacks Whales about half way to the horizon. We could see their “blows” and backs as they dove without the binoculars! Fortunately, we had other volunteers down there to share them with!

Posted by Grant and Kathy Webb at 8:59 AM