Our return to the West

This blog entry will end our 2010 trip travelogue as we describe our trip back to the west. Even though I am posting this in March of 2011. We did this trip in October of 2010.

After leaving Elkhart, Indiana our next stop was a visit with our oldest son Tim who lives in Aurora, Illinois. Like all urban areas it is is difficult to find RV Parks in the area. The closest RV Park to where Tim lives was at the Empress Casino in Joliet, it is a water and electric only RV Park but very nice. They were winding down the season so they had plenty of sites. They did tell us as we were registering that they were turning the water off for the season in a few days. Such is the problem of RVing in the Mid-west during October as RV Parks start closing for the year. A new year bird for us were Chimney Swifts buzzing around in their batty flight over head at the RV Park..

We Visited with Tim and Allen for a few days, Raider was so excited to see his big brother! Allen makes a great barbecue steak that we enjoyed one night. We all played Rock Band with the Beatles on their giant TV system (6' high & 7' wide!). However, we had to start heading west, but we enjoyed the time visiting. We had never been to Iowa, Nebraska or Kansas, so we decided to head to Texas by way of Iowa, Nebraska and Kanas.

You know how people says that Iowa, Nebraska and  Kanas are just flat with miles and mile of corn growing. They are right!

Kellogg, Iowa
Our first night stop was one night at Kellduff RV right next to the corn fields. Just as we set up camp, out comes the farmer to harvest the corn. We had a ring side seat to watch it being done, very interesting. Cobs and stalks get sucked up into the combine, corn is cut off the cob then spewed into a grain cart driving along side the combine to catch it and the remnants of everything is blown out the back of the combine. along with a lot of dust. 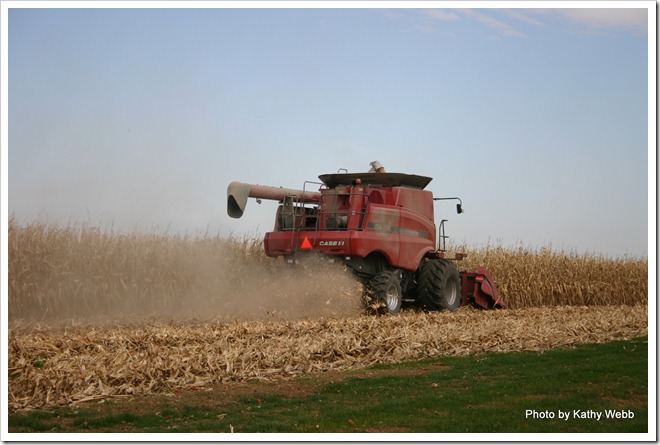 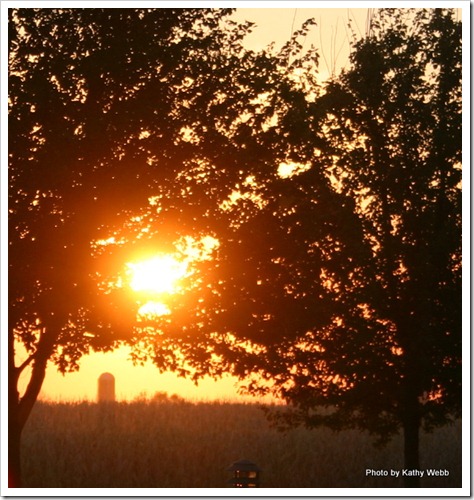 We stayed 2 nights at the Salina KOA; we had to do laundry and get groceries. Salina is at the crossroad of I-70 and I-135, No, we didn’t see Dorothy or Toto and No Tornado Watches either!

Enid, OK
After weeks of every RV Park being near an Interstate we decided to stay the weekend at Camp Away RV Park, In Enid which is 30 miles from the nearest interstate. A nice and quiet older park outside town, no trains or highways nearby. Or so we thought, turns out there is a train that goes though Enid every night. Shortly after leaving Enid, we had one tire go very low in just minutes. Called Good Sam Roadside Assistance & had the spare mounted in it's place. Barely 150 miles later, as we're pulling into the ONLY rest area for hundreds of miles the right front trailer blew apart, all that was left was the side walls, the trailer was sitting on the rims! We had to purchase another tire since the spare was in use on the other side. $250 and a hour & half later, as an OK storm came barreling near by. We were on our way to have all of the tires replaced, it couldn't have waited another 220 miles across the Texas Panhandle to Farwell, TX and Tire Country!!! 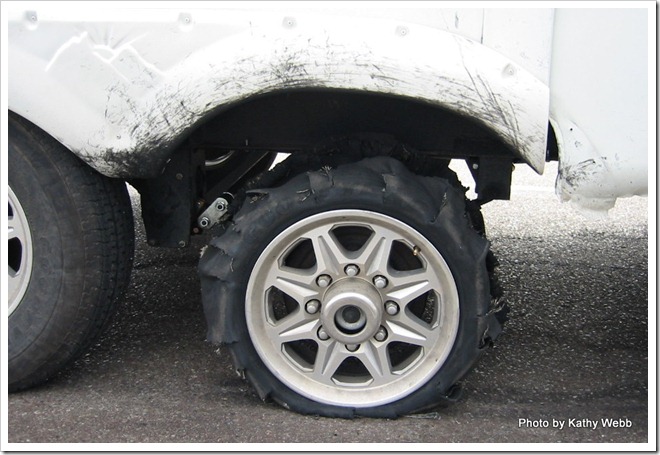 Thankfully, there was a cheap off the road excuse of a campground a few miles from the rest area, we stopped the night in Texola, OK, just one mile from the Texas border. 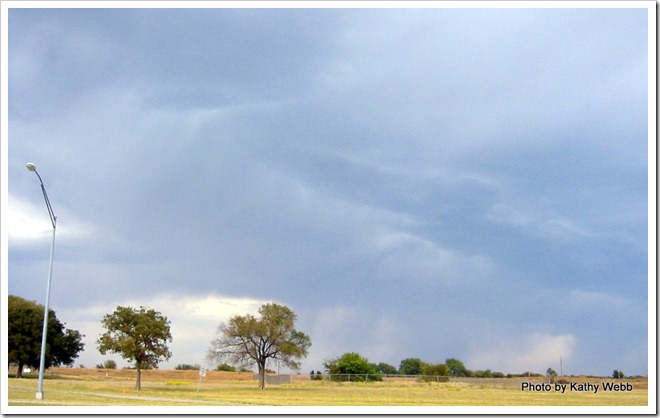 Clovis, NM
We buzzed through the Texas panhandle, praying no more tire issues to Clovis, New Mexico. It is just a few miles from Farwell, Texas where Tire Country is, our favorite tire store. Lonnie the manager would take care of us! Next day drove the short drive to see Lonnie, he told us of the long line of complaints against Goodyear Marathons, some were pretty scary stories! We had all 5 tires on the trailer replaced with Bridgestone and had the wheel bearings repacked on the trailer. Lonnie is an RVer with a 5th wheel of his own, so when he gives advise he knows what he is talking about. We had Lonnie replace all the tires on our first trailer before going to Alaska and from the beginning planned to have Lonnie replace all of the tires on this trailer. Unfortunately, the Goodyear Marathons died 250 miles too soon. If you are think about buying new tires, go see Lonnie and his great crew.!

Albuquerque, NM
Finally, the wind stopped blowing and the rain moved east, we made a beeline for Albuquerque We were going to stay until Monday when we heard that there was a nasty storm system coming in with 45mph winds, we left Sunday instead 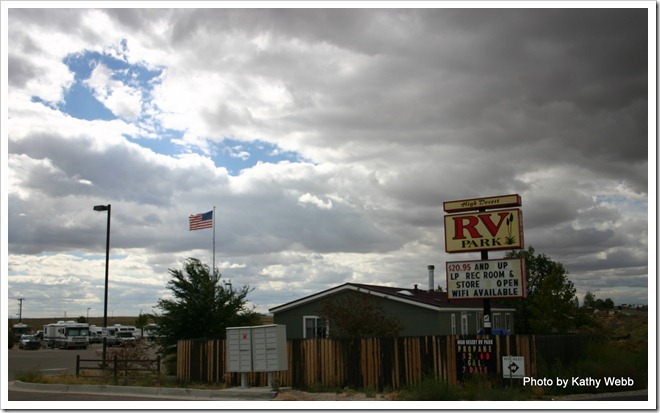 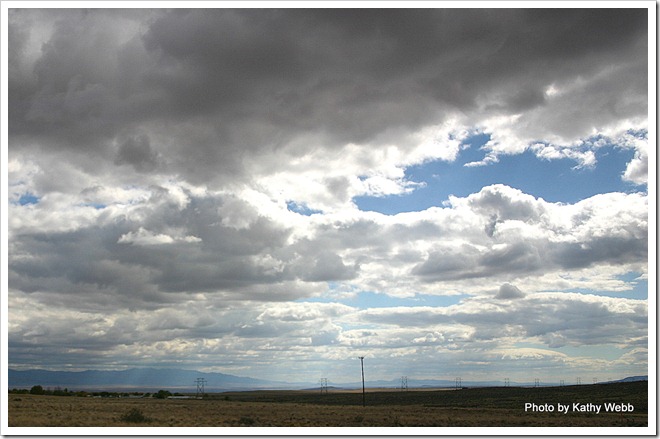 View out our back window onto the desert

Along I-10 in New Mexico 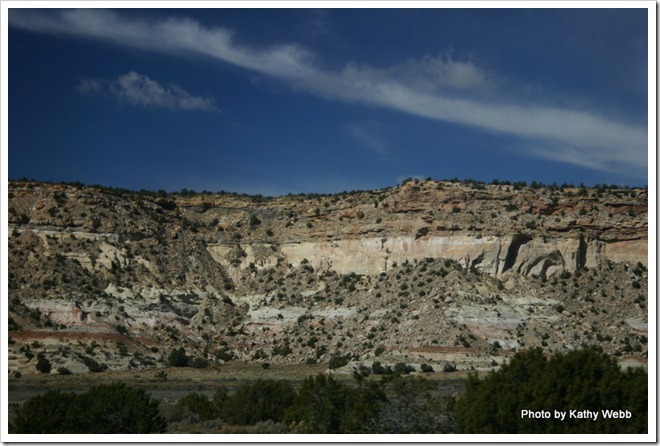 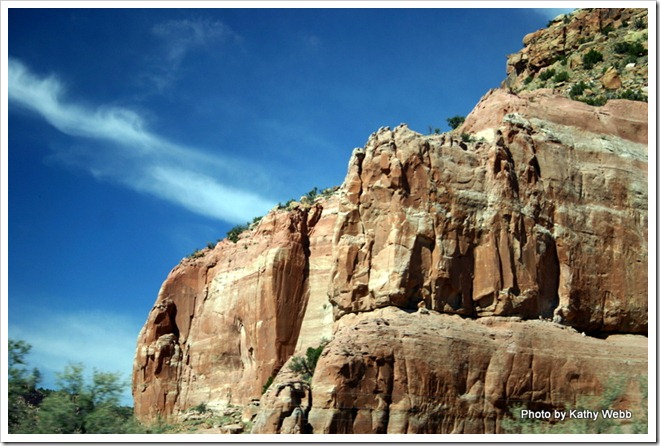 Williams, Arizona
We were going to stay the night in Holbrook, AZ, but it was around 1 PM too early to stop so Grant mushed on towards Flagstaff. Just as we approached Flagstaff, couldn't help but see a very dark cloud system over the town! At nearly 7,000 ft. in elevation, rain could turn to snow. Grant didn't want to learn how to drive the trailer in the snow, he mushed on further to the Williams KOA, a few miles from I-40. Along the way we saw the Camping World outside Flagstaff. It was the one that had just been blown apart from the tornado a week before.  All of the tangled wreckage of new trailers were plowed into a fenced area, the store was still closed. The drive from Albuquerque, New Mexico to Williams, Arizona was our longest distance day since we have been full-timing. 370 miles!  We hunkered down for a few days for the storms to blow over. Got the laundry caught up just as the power went out! 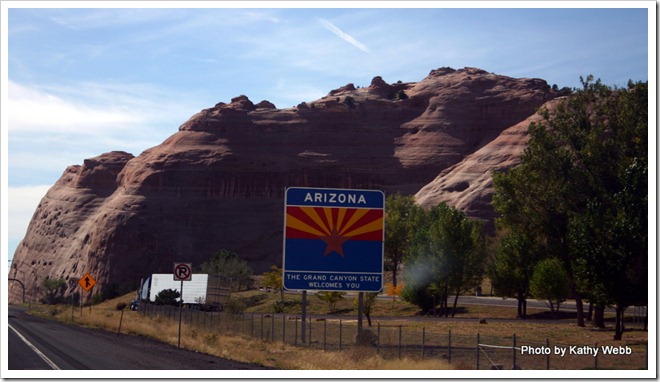 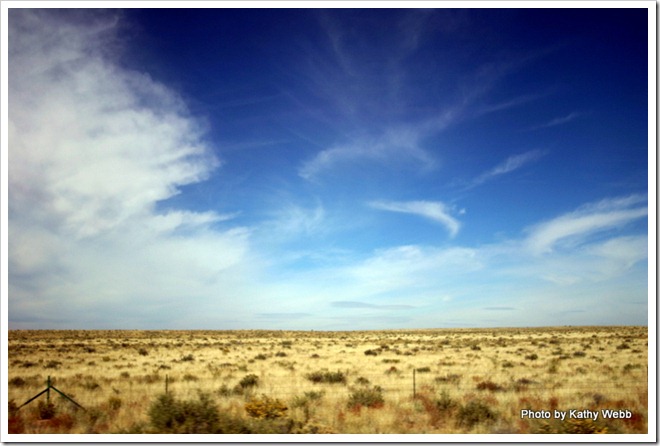 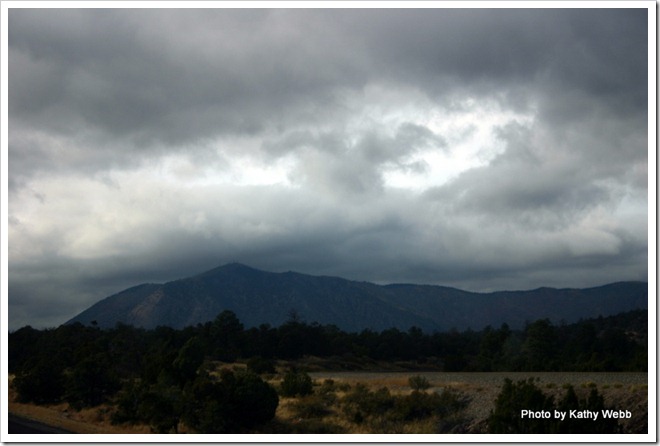 Pahrump, Nevada
We were considering staying for a few days and going up to the Grand Canyon but, we awoke to 16 degrees and snow in the very near by hills. When the sun returned we boogied for Nevada, driving over the new bridge in front of Hoover Dam. Kathy was petrified of the thought: the bridge is 1,075 feet above the Colorado River! Grant was excited to get a chance to see the Hoover Dam. Beautiful new highway Arizona 93 is paved, we were on the bridge before we knew it! The side walls of the bridge are over 5' high, you couldn't see down, so Grant  still hasn't seen the Hoover Dam! lol
Taking this route saved us many miles, and they have high profile trucks and trailers travel down the left inside lane for stability. We were in Las Vegas in no time and it was a clear day! Made it through the maze of highways in the city and sighed relief when we were finally on the outskirts. Just as we climbed up the mountain towards Pahrump, there were 2 dozen Desert Bighorn up on the cliff looking down on the road. Happened too fast, no pictures sorry! Up and over the top, dropped down the other side to our favorite Escapee Co-op RV Park of Pair-A-Dice. They had room for us to stay a month and unwind from our adventures! YES! 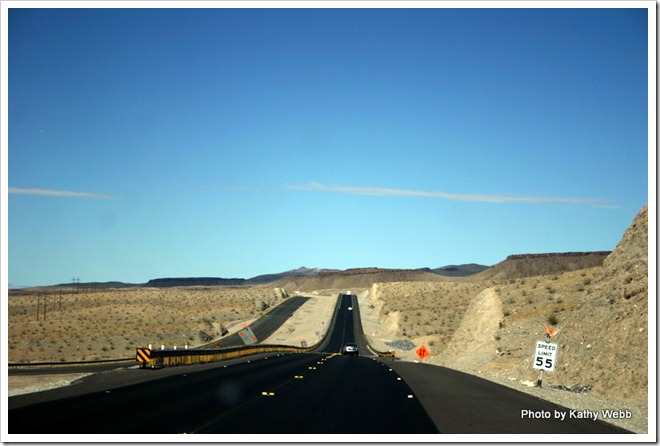 Brand new highway, a joy to be on a fresh smooth road!

We're on the bridge and can't even see Hoover Dam, it's below the right side of the bridge!

Las Vegas on a clear day... note the snow in October on Mt. Charleston on the left.

More pictures of our trip West on the slideshow:

Posted by Grant and Kathy Webb at 6:43 AM