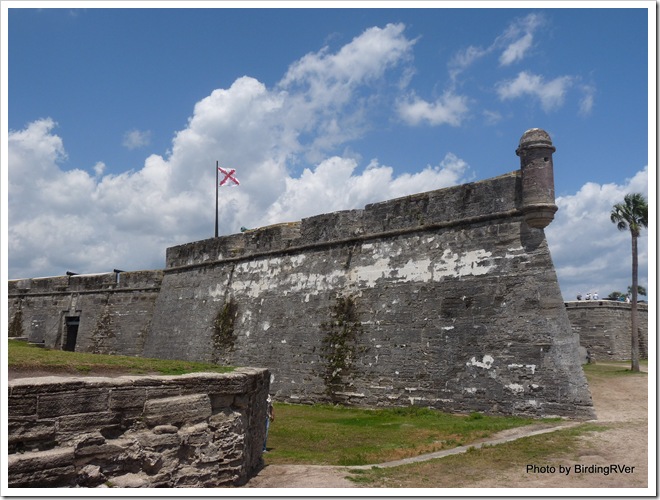 After leaving Disney World and Kissimmee, Florida we turned north. After all we only have about 5 months to get to New England for leaf season. We also wanted to have some non-driving days to relax. On my list of “must see places” in Florida was St. Augustine:  “Founded in 1565, it is the oldest continuously occupied European established city, and the oldest port, in the continental United States.” How amazing is that? A town that was founded 445 years ago! That is 42 years before the founding of the Jamestown Colony in Virginia.

Our drive to St. Augustine was uneventful on typically very good Florida highways. Florida may have the best highways in the country. The weather was also what we have come to  believe as typical Florida weather. Lows about 70 and highs around 82, with the humidity about 80%. As everywhere else in the south we ran our A\C day and night.

St. Augustine is very much a tourist town. There are miles of hotels, motels, shopping and places to eat. The number of people around on the weekend seems to be triple what we saw during the week days. Also, as a very old town the streets are narrow and NOT a good place to be driving a one ton dually pickup! On the weekend parking was non-existent

We came to St. Augustine to see its two primary historic landmarks the old fort and the lighthouse . 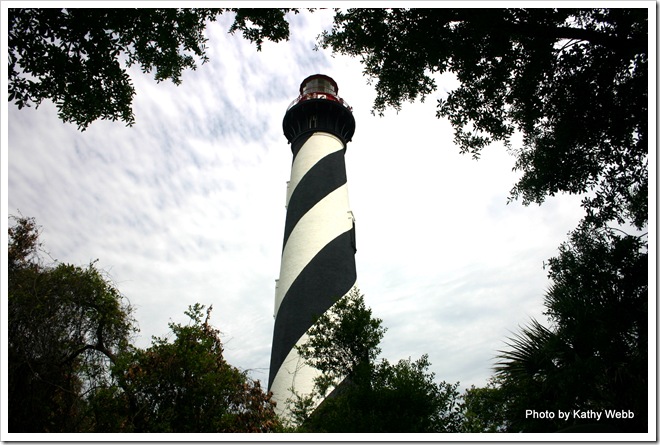 St. Augustine is the site of the Castillo de San Marcos. From its founding in 1565 St. Augustine was attacked and burned periodically by the French, the English and Pirates. Including an attack in 1586 by English privateer Sir Francis Drake. Finally, in 1672 after more than a hundred years of raids the Spanish started work on stone fort. The fort was under construction for 25 years and is made out of “shell rock” called Coquina; almost a  limestone, but very porous. Due to the unique nature of this rock cannonballs that hit the wall are simply swallowed up. Over the next 150 years there would continue to be raids on St. Augustine, but the fort was never taken in battle. 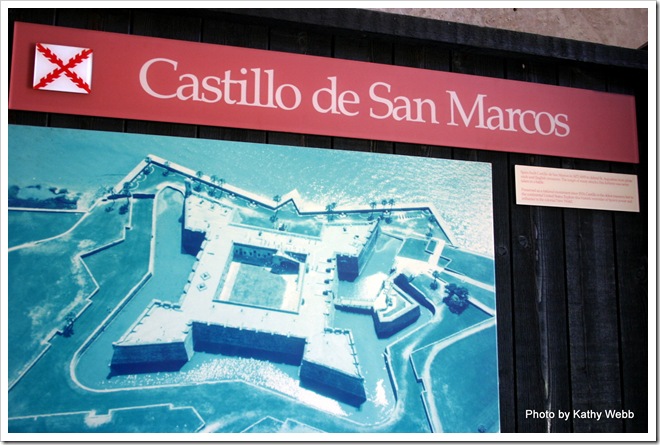 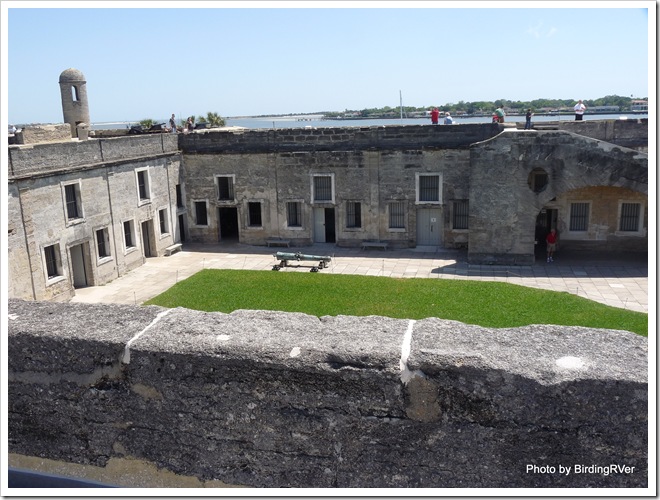 Parade Ground inside the fort 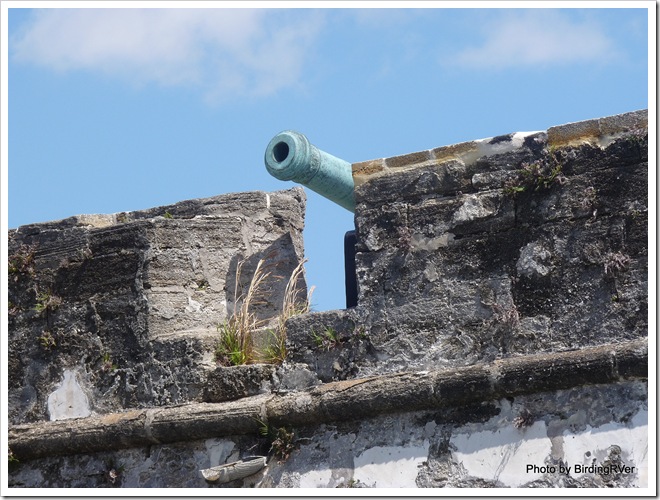 Cannon at the ready 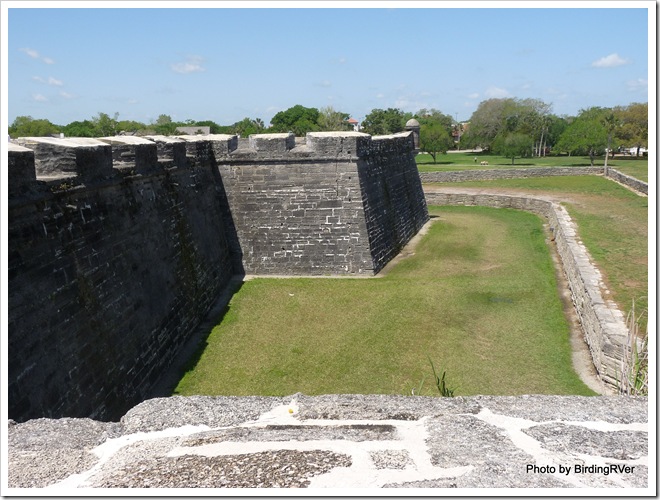 The Moat is dry these days 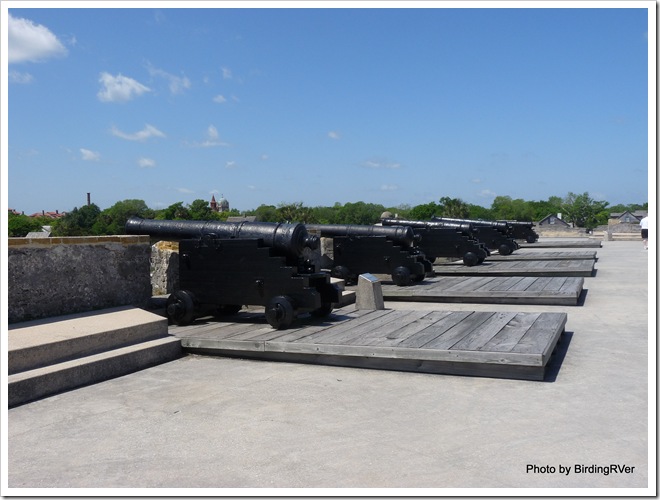 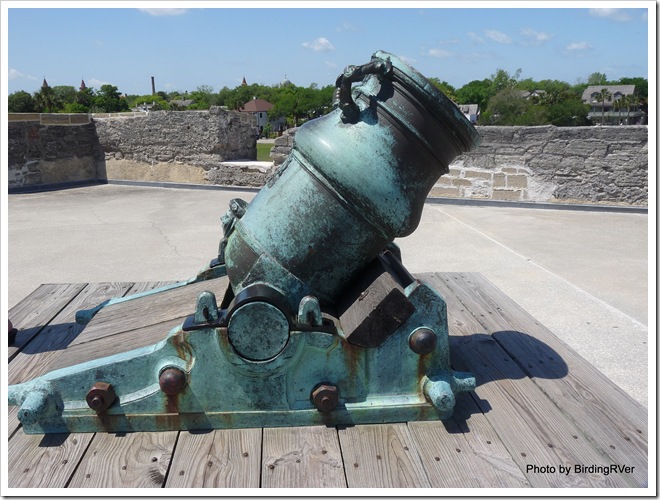 Florida’s first lighthouse was built in St. Augustine in 1824 on the site of Spanish “watch tower or beacon” that had been there since at least 1589. However the current lighthouse was started in 1871 and went into operation in 1874 shortly before the 1824 lighthouse fell into the sea. The 1874 lighthouse was declared surplus in the 1960s and fell into disuse, disrepair and vandalism.  The Keepers House was burned in an arson fire in 1970. In 1980 a group was started to restore the lighthouse and grounds. Today the 165 foot lighthouse tower and adjacent Keeper House are in perfect shape. There are 210 steps to the top of the tower where you can walk outside around the tower and get a great view of area. 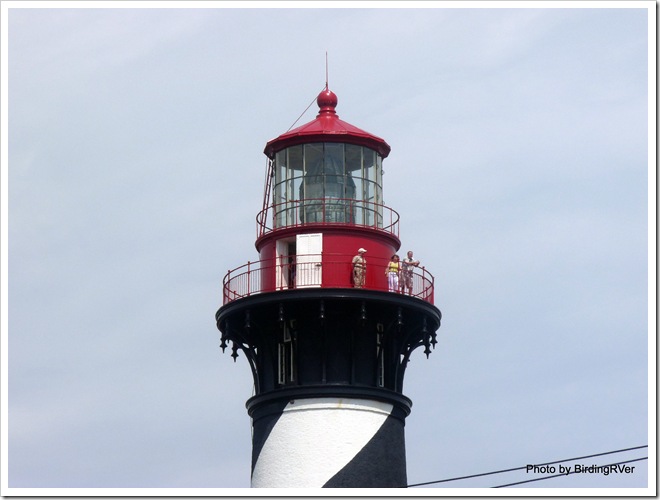 Docent and visitors on the top walkway 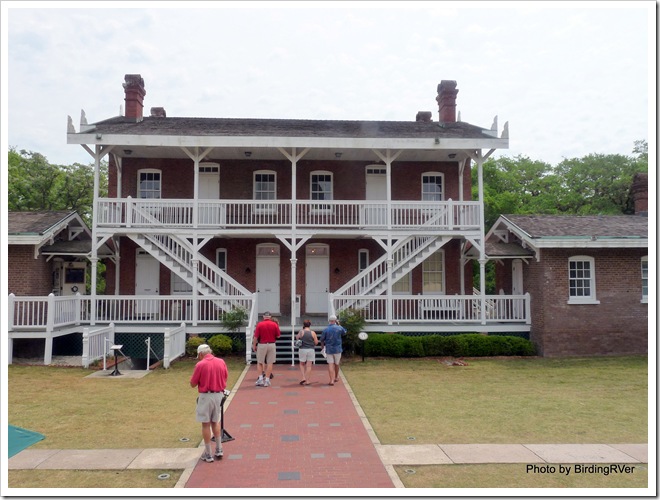 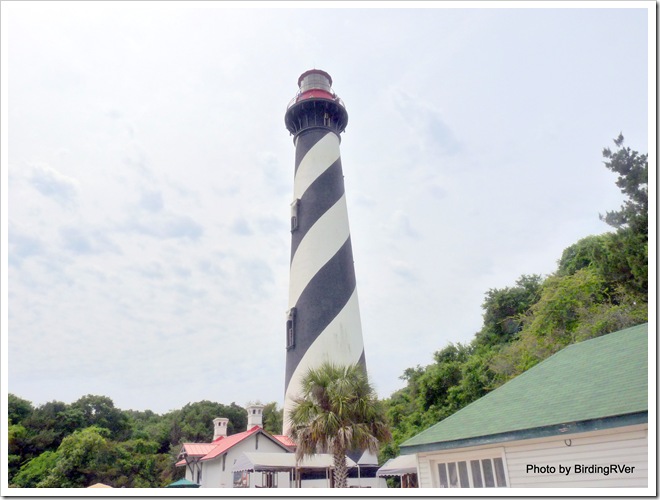 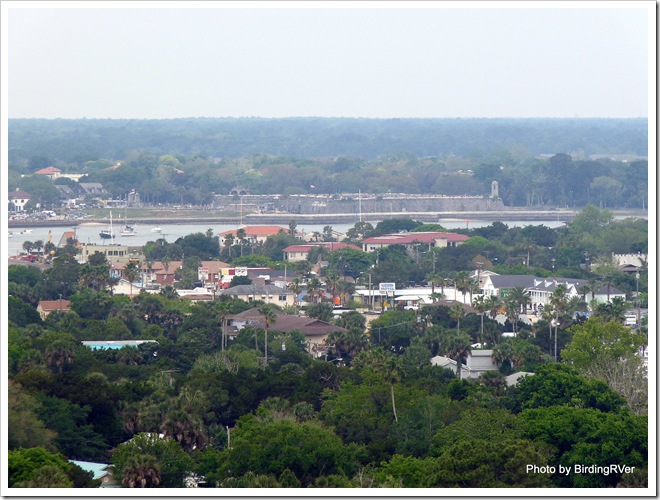 Castillo de San Marcos from the top of the lighthouse

Before we started on the road we were told that every Fulltime RVer needs a weather radio to be notified of local weather problems.  We bought one before we started and plugged it in. However, the weather in the west generally isn’t all that exciting so we neglected the weather radio. We used the outlet for something else. let the batteries run down and never tuned it in. That all has changed since we have been touring the south. One afternoon the weather radio went off telling us of a “Tornado Watch”, then a “Thunderstorm Warning”, followed by a “Strong Wind Warning”. This continued ever 15 minutes for 5 hours. All the time we had no wind, no rain and not even very dark clouds. We also came to the realization that RV Park had no tornado shelter, no basement, or any building made of brick. No one in the RV Park seemed  too be concerned. We have come to the conclusion that natives receive so many watches and warnings that they just ignore them. Much to Raider’s dismay we did get a 15 minute Thunder Strom right at sunset. It rained very hard and washed all of the dirt, pollen, and who knows what else, from the trees above us, all over the truck and trailer. When it was all over they were sticky and very dirty looking.

Just after crossing into Georgia we saw a flock of 6 birds rising out of a field on the right side of the road. They circled a couple of times and then flew over the highway at about 20 feet. We were shocked when we saw that they were Whooping Cranes. Whooping Cranes are among the rarest birds in North America and a new addition to our life list.

The RV Park we stayed at in St. Augustine had a small pond with turtles, ducks, nest Red Shouldered Hawks and an Anhinga. 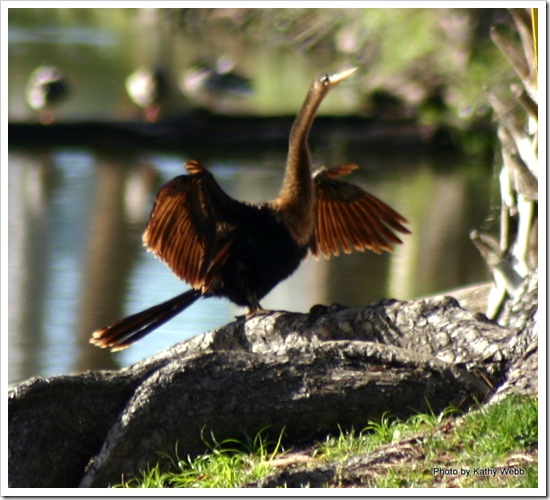 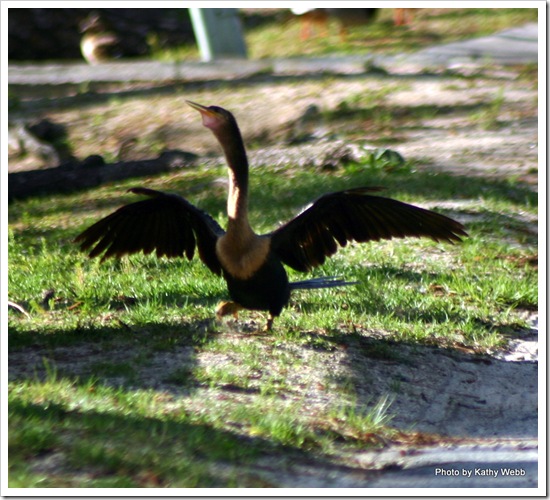 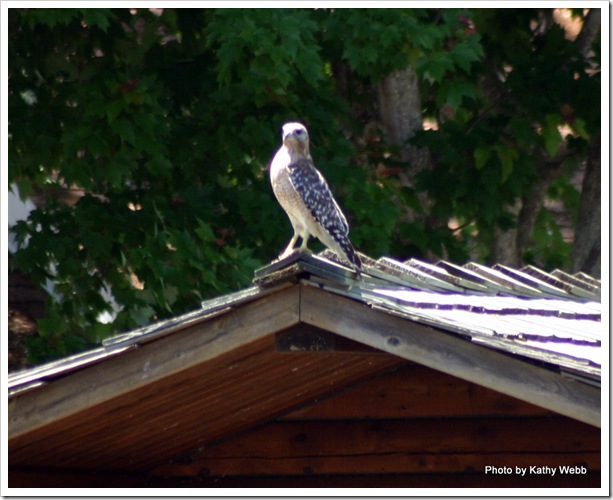