Let’s see, we last were in Beaumont, Texas. On Monday we drove through Louisiana and stayed the night in Baton Rouge. I couldn’t get over all of the thick forests along I-10! I guess I expected swamps and places like in the “Blue Bayou” of Disneyland! People had warned us that the roads were the worse in Louisiana, but they must have fixed most of them! There was only one 20 mile stretch where we were so glad we had the Trailer Saver Hitch or we would have been porpoising down the road from the bouncing! They have improved I-10 at least! 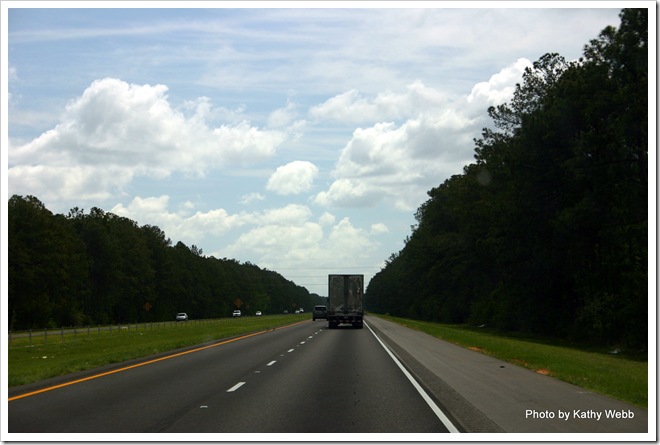 Beautiful I-10 through Louisiana

Tuesday we drove through Mississippi and Alabama, just narrow strips of each state. 75 miles across the “boot heel” of Mississippi and only 60 miles across Alabama’s “boot heel”. Imagine our surprise when we came on the metropolis of Mobile, Alabama and there was a tunnel under the Mobile River!! Where’s the height clearance? Oh well, the trucks are going through and so did we! 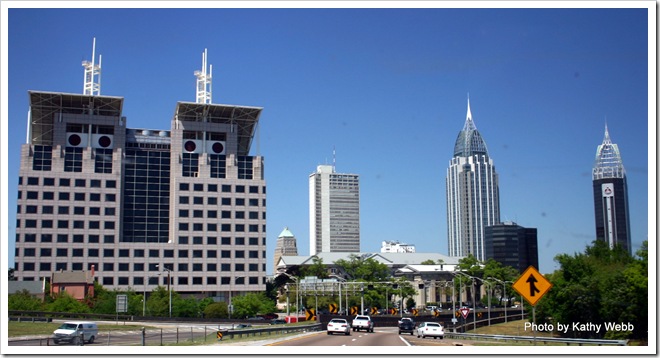 On an approach to a tunnel! A tunnel?! 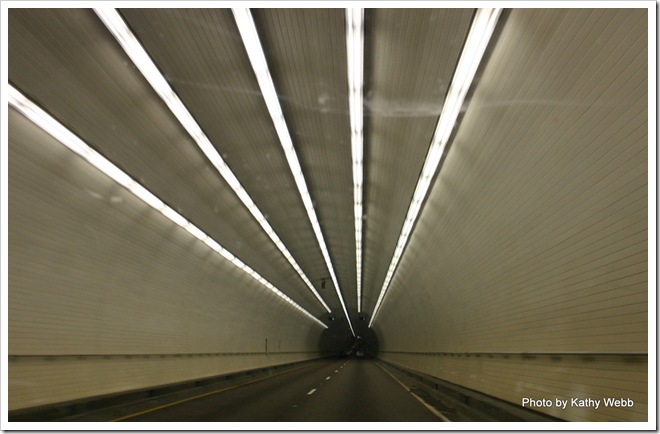 The tunnel under the Mobile River, a First for the new Montana!

By 3 PM we were in Pensacola, Florida already! We stayed 2 nights at the KOA, it was far enough away from the highway, quiet and peaceful, we needed to stop and catch our breathes! 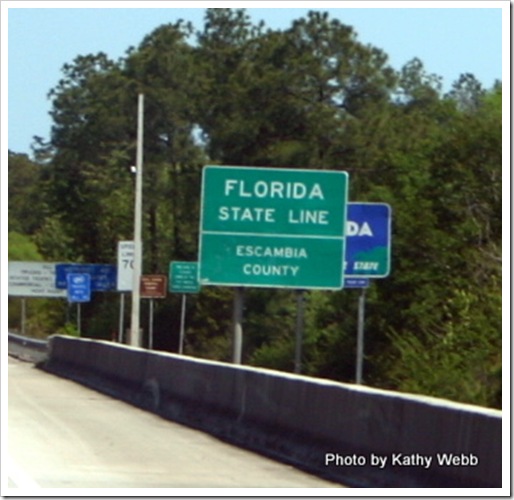 Thursday we continued on down the road again at the crack of 11 AM! (It’s warmer here in the south; you don’t want to move too fast!) Before we knew it we were in Williston, FL at a gorgeous RV Park we found on RV Park Reviews, called Williston Crossings! It has to be the prettiest RV Park we have ever visited. However, it is in receivership due to the lack of funds by the owner! They honored our reservations and that’s all that mattered. The sites are long and wide, with nice grass strips on both sides and trees for privacy! You could barely see the rig next door if there was one! It has so much potential if somebody could afford to complete the many projects it would be a very good investment!

You’re probably wondering: where the heck is Williston and why go there? 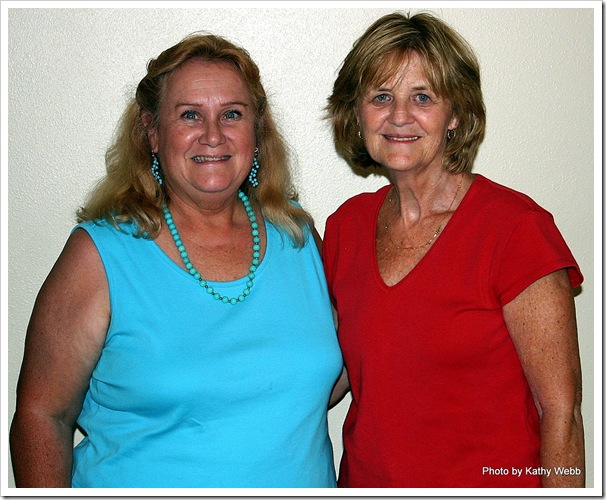 Kathy and her cousin Liz

Well, my cousin Liz lives there and I hadn’t seen her since the day we left Long Island, NY in Sept. 1959, to move to CA! My family lived next door to her and her family. Liz and her brother, Walter were more like sister and brother to me than cousins! 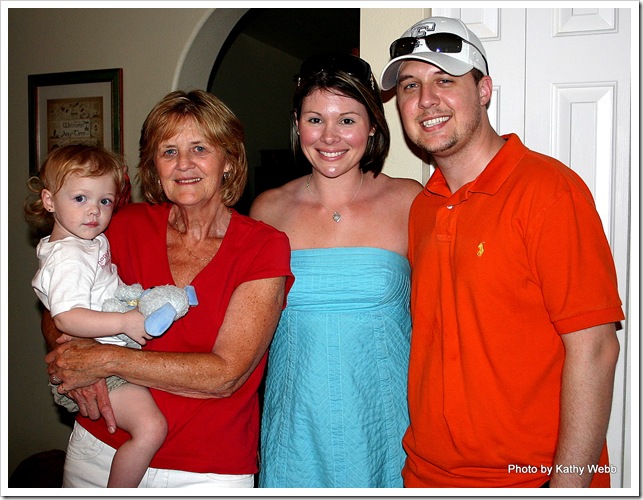 So, my goal was to visit her and her family for the first time! It was wonderful seeing her again and meeting her son Craig, his beautiful wife, Tiffany and their darling 20 month old Addison, who runs non-stop like the “Energizer Bunny”!! 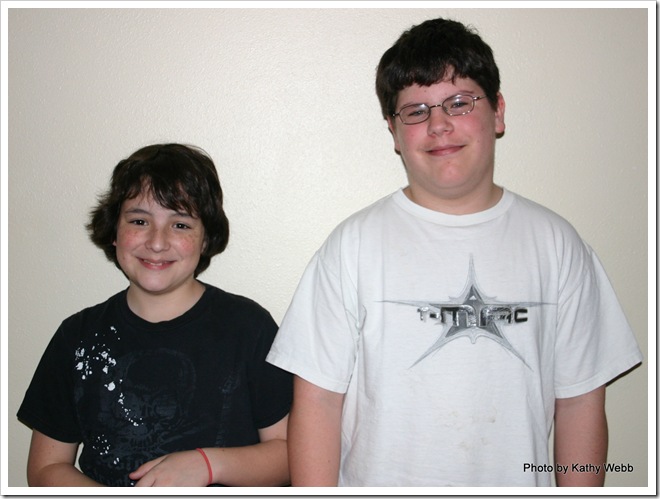 Plus we got to meet Liz’s daughter Michelle’s two youngest sons, Nick and Zack. Zack will be a contestant on the Food Channel one of these days! He loves to cook and he’s of the ripe old age of 13! I watched him make mashed potatoes from scratch and I’m sure Emeril Lagasse would have been licking the bowl! Nick is quite a computer wizard and was happy on his computer for a rainy weekend.

Two days of going down Memory Lane with Liz was a lot of fun! Catching up on 51 years was quite a gabfest! And of course, she treated us to fine southern barbecue dinners both days! I can still taste the grilled veggies, and the flank steak a week later! Thanks Liz for a wonderful visit!

Well, since we were only 125 miles from Disney World, how could we skip a visit to there?!! Living in California, we’d been to Disneyland hundreds of times, so EPCOT was intriguing! And heck, Kissimmee is right next to Davenport, we could meet some more Arctic Camsters! So Monday we checked into the Kissimmee KOA for a couple of nights. What a great deal, as KOA VIP’s, we got 2 nights for the price of one! It was only 12 miles from Disney World and away from all of the traffic. 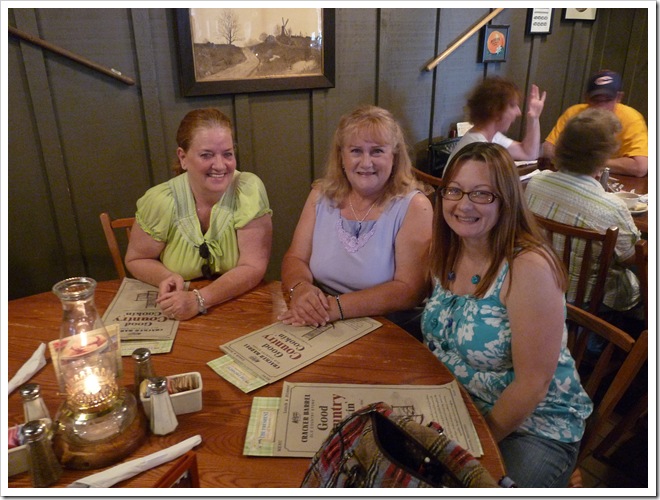 After exchanging emails, we drove over to the Davenport Cracker Barrel and met Mz. Liz, her husband, Kurtis, Gloria with her husband, Ralph! I have been emailing these ladies for over a year, it was a lot of fun meeting them finally in person! Ralph and Gloria hope to go full time RVing in 2-3 years, so we have a lot in common. Mz. Liz and Kurtis hope to retire around the same time too, but they want to move back to Alaska, full time! It was fun to put faces with names!

The next day we did Epcot. Since we knew we’d be gone most of the day, we checked Raider into the Kennel Club right there at the park. I didn’t have to worry about him going outside once and a while and if the thunder storms came through he wouldn’t be alone.

Like a couple of 16 year olds, we road all of the rides that everybody runs to first! We loved the “Fast Pass” method of waiting for rides! The only long line we stood in was 40 minutes, which wasn’t bad, because it was inside under the AC.

Traveling through “the World” section, it was a tough decision on where to have lunch! Mexican sounded good, but the fancy restaurant was “Reservations Only”. Do we do: Norwegian, German or Chinese food? The Nine Dragons restaurant had no waiting and looked very elegant, that made the decision easy – Chinese! The Sweet and Sour Pork over spinach noodles was delicious! Grant had the Szechuan Beef with the Hot and Sour Soup. It was so refreshingly cool in there I didn’t want to leave!

We also traveled through “Germany” and “Mexico”, where we sipped on delicious Margaritas as we watched them bring out the fireworks barges. Then on through “Italy”, “Morocco”, “France”, “England”, (had to visit the ‘Rose and Crown’ for a pint of Bass Ale), “Canada” and then USA!

I found out that EPCOT is twice the size of the Magic Kingdom! No wonder our feet and legs were tired! Where are the Segways to get around the park? Disney is missing a buck there!

It was time to retrieve our furry friend. He was so elated to see us, we hadn’t abandoned him totally! The Daily Report Card said: he wasn’t hungry, but was a happy camper for his walks and sang along with the kennel choir! I’ll bet he did, probably one of the baritones! Thursday we moved on up the eastern coast of Florida to St. Augustine Beach for a week of R&R. So where are those very white beaches I’ve seen in photos?!

Posted by Grant and Kathy Webb at 1:47 PM