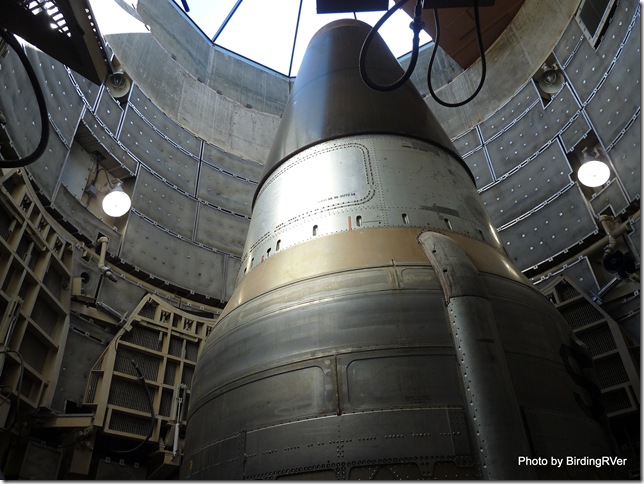 Top of the TITIAN II missile and the Mark 6 warhead

WOW, almost a month since we had a blog entry and Kathy did that one; I am REALLY getting bad about this! I’ll see what I can remember of our adventures over the past 4 weeks.

After our last posting we had some more rainy days and some very nice days. Every day that the weather would allow we would  take Raider “the desert dog” out for a walk on the desert! He absolutely loves these walks, because he gets to run off leash and sniff to his heart’s content for about two miles. Yes, he does occasionally get stuck with cactus thorns. He doesn’t whimper when this happens, he just holds up the injured paw until we remove the thorns and then goes right back to the same cactus to sniff it again.

We also spent some time doing trailer maintenance. As you can imagine with roads as rough as they are everywhere the trailer is undergoing a constant earthquake as we travel down the road. As is typical for RVs it took 4 trips (20 miles each way) to finally get the right part.  We also had the truck serviced and even a simple oil change took two visits to the Chevy Dealer. Naturally, that was on the other side of Tucson and took almost an hour each way to cover the 25 miles to the Chevy Dealer. We REALLY like the location of Diamond J RV Park for its scenery, quietness and great access to desert trails, HOWEVER it is on the wrong side of town from everything. 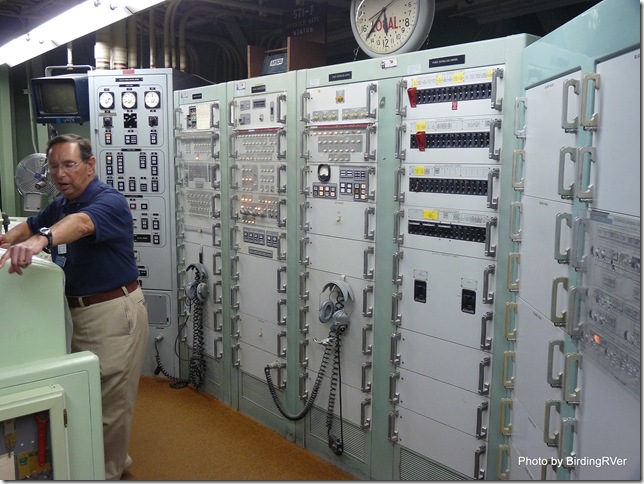 State of the art 1970s missile launch and guidance computers

On one of the nicest days we drove down to Sahuarita, Arizona (about 30 miles south of Tucson) to the Titan Missile Museum. “The TITAN Missile Museum is the only publicly accessible Titan II missile site in the nation. The TITAN II was the largest Intercontinental ballistic missile in USAF inventory and remained on ALERT from 1962-1987. Atop the missile sat the massive Mark 6 warhead. The TITAN II measured 110 feet in length and 10 feet in diameter, utilized in excess of 200,000 lbs of two part hypergolic propellant and produced 530,000 lbs of thrust. The TITAN II held a target range of 5,500 miles.”. TITAN II was also used to launch all the Project Gemini manned flights of the mid-1960s.

Posted by Grant and Kathy Webb at 3:04 PM