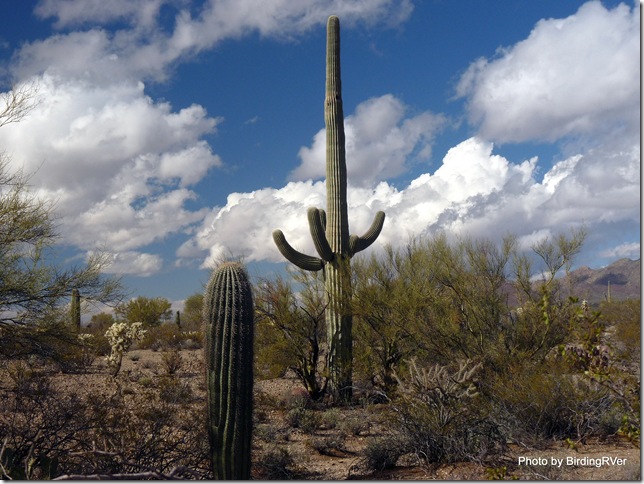 After getting all of the groceries and laundry done in Casa Grande, AZ we headed down to one of our favorite spots in the state: Tucson!

We were here back in February, 2008 and learned of a unique RV Park west of the city called Justin's Diamond J RV Park. It is run by Doc Justin and his wife Christine. They prefer not to make reservations, in fact their recording says “no reservations needed”. However, we didn’t want to get all of the way down the west side of town to find out they were full. So Grant left a voice mail asking if there was a chance of staying for a couple of weeks. We heard back after a couple of days: “sure, come on down.”

When we got here we were shocked at how popular the place has become! There were 4 big rigs in front of us checking in and 3 behind us, going back down the driveway. We were lucky to get one of the last few spots on a Monday afternoon! At least 3 RV’s had to stay in the over flow lots dry camping until a spot became available. There are over 200 campsites and they have been full every night!

If you’ve been here before, I know what you’re thinking: they have the huge gravel rocks in their sites. Good news, they have removed at least half of them in each site and replaced them with smaller gravel in the patio and driveway area! Nice and level, too! 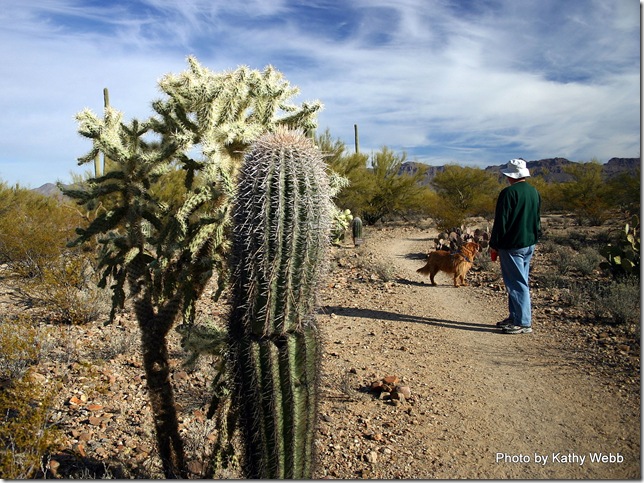 You can walk out beyond the RV park right out to the trails in the desert! Every chance we get, we take Raider “the desert dog” out for a stroll to explore the wonderful peacefulness of the desert! Lots of birds are in tune, starting their annual courtship behavior and getting nests ready. There’s the Cactus Wren, the Curve-billed Thrasher, Lesser Goldfinches, Cooper’s Hawks, Gila Woodpeckers, Pyrrhuloxia, Gilded Flicker, Black throated sparrow, White crowned sparrow, and the ubiquitous House Finches! The Dawn Song is quite a melody! 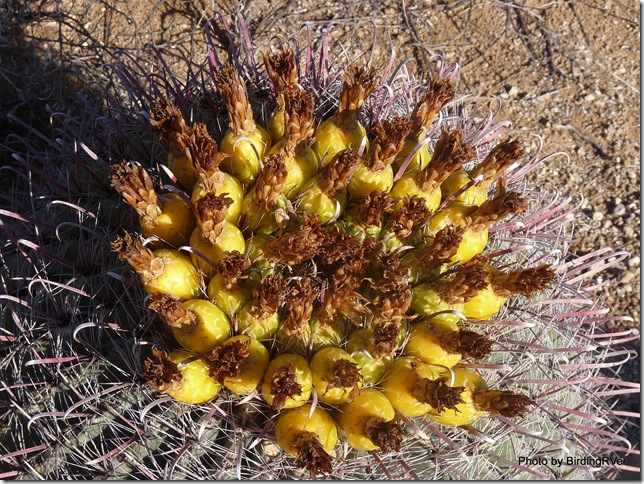 I have been in touch with a friend via Fairbanks Friends, an internet forum, for over 2 years and knew she lived in this area. So I sent her an email, told her we were in town for a couple of weeks, maybe we could get together. Trish is another Alaska lover, even though she lives in Arizona! It was wonderful to finally meet her in person and talk about our favorite state! She is quite a photographer, plus she has a camera just like Grant’s, an advanced model with great video features. So they had fun comparing notes! It was so funny, it was as if I already knew her and now could put a face and a voice with the name! Great fun! 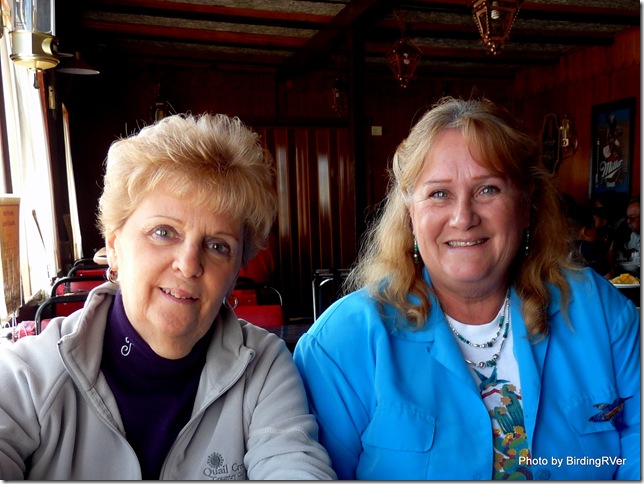 Near our RV Park is the Saguaro National Park, which has acres of Saguaro cactus up and down the hills. Your imagination can fly away with all of the shapes and sizes of this giant species! They have a Visitor Center to help educate the public on the sensitive nature of the desert and its preservation. http://www.nps.gov/sagu/index.htm

Rather nearby is the Sonoran Desert Museum. Filled with plants and animals that live throughout the area, most of the exhibits are outside. They have all of these shaded alcoves with wonderful trees to make you feel like you are in an oasis! Several animal exhibits include the Desert Bighorn Sheep, Mountain Lion, Coyote and a Free Flight demonstration of the birds of prey in the area. We had gotten there just a little too late to get down to that, so we chose another wonderful exhibit. 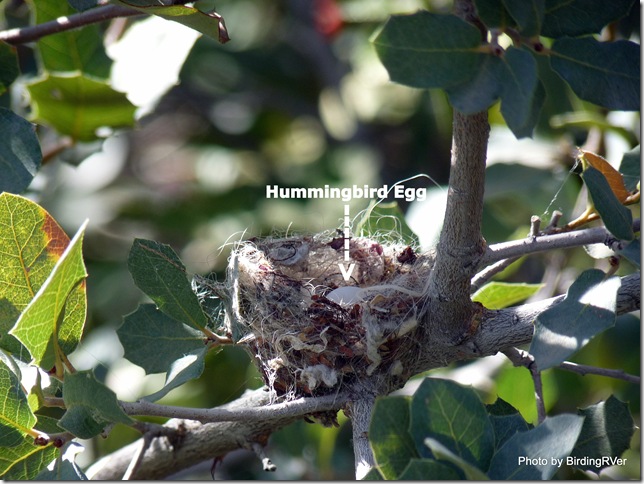 That was the Hummingbird Aviary with the peacock blue Broad-billed Hummer, the purple jewel called the Costas Hummer, Anna’s Hummingbirds and my coppery favorite the Rufous Hummingbird. The mesh overhead is to keep them in as well as to shade them. Best time to go is on a clear sunny day, early before the crowds find it and hope that some will pose for you. We had a very cooperative male Broad-billed Hummer that was sunning himself on a branch at about 4 ½ feet off the ground, about 12 inches from the path. No need for zooming the lens here! You could actually see him snoozing, totally oblivious of people! The females were already sitting on nests, one egg was seen! It got warmer as the morning wore on, so they were up in the tall branches using the beams for shade. Comfortable for them, however, dark for getting their photograph! Since they are nesting, flashes are not allowed. Where’s my bounce reflector?! 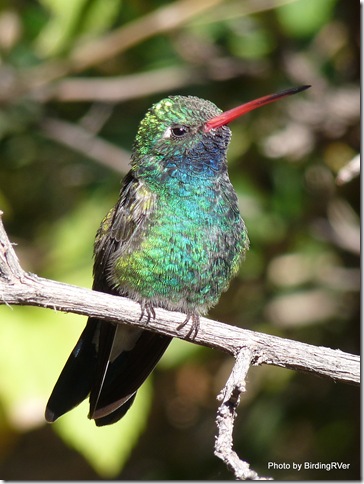 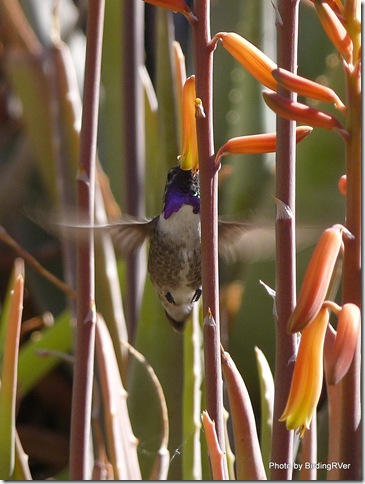 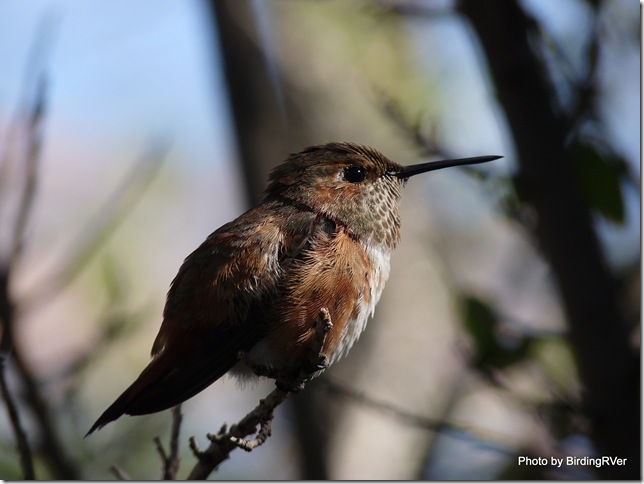 There are several places to eat there, from fine dining to fast food, all of it quite delicious! We ate at the Terraces, which overlooks the grounds. On previous occasions we’ve had Cardinals fly in to see what we’re eating. On this day it was several boat tailed grackles. 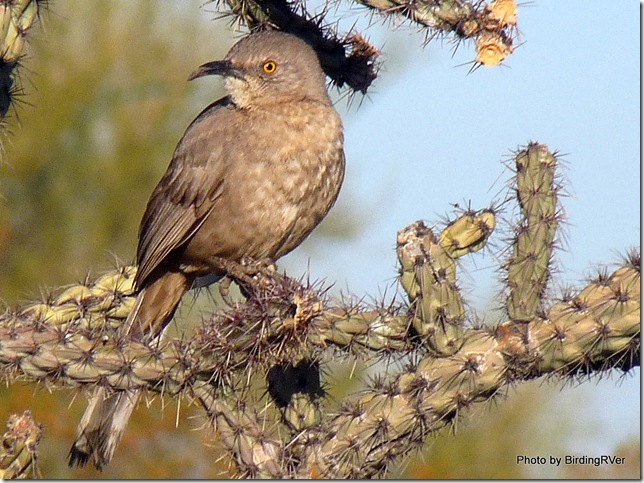 We tried the hummer aviary one more time, hoping it had direct overhead sunlight, but unfortunately it was so crowded you couldn’t move or see the birds. At least the children in there could spot the very busy “Green” hummers as they were calling them, (the females), gathering spider webs for their nests. They flew really low, just a few inches off of the ground to the kids delight!

That was last Saturday. By the time we got back to the Montana it was time to put on shorts and sandals! It got up to at least 75 degrees! We thought it bizarre how the Weather Channel was forecasting 50% chance of rain on Sunday. How could that be? The sky was free of clouds! At 4 AM the next morning, big drops started to drum on the roof, I believed the meteorologists! It poured non-stop until about 11:15 AM! By 1 PM the sun broke out and we noticed that most of the water had receded into the sand, so off we went for our daily desert walk! Ah, the smell of the desert after a rain is indescribable! The air was warm but just enough humidity to make everything renewed again!

The days have been mostly sunny, in the high 60’s or low 70’s. A little cooler than usual, but we’ll take the sunshine any day. The evenings and early morning temps have dropped to the 30’s! Despite it being very southerly and in the desert, the sun makes the difference on how comfortable you are!

Several interesting places south of Tucson we would like to check out are:  Arizona State Historic Park in Tubac, Tumacaori National Historic Park and the Titan II Missile Museum. We’ve already extended our stay to 3 weeks, so perhaps we can get those in, too.

Enjoying the southwest and glad we’re not shivering in some of that cold up north and in the southeast!

Posted by Grant and Kathy Webb at 3:29 PM