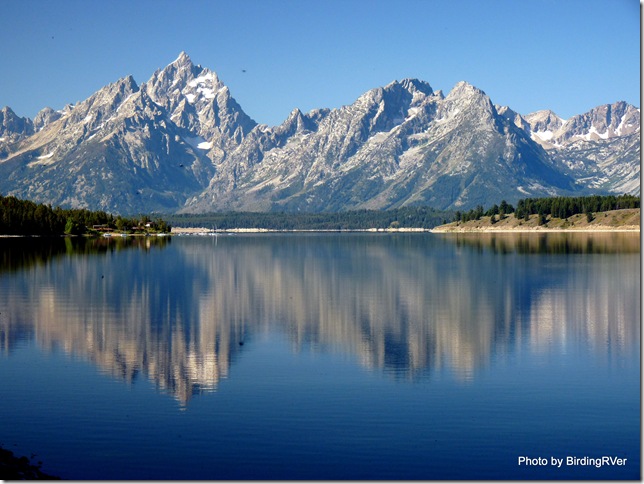 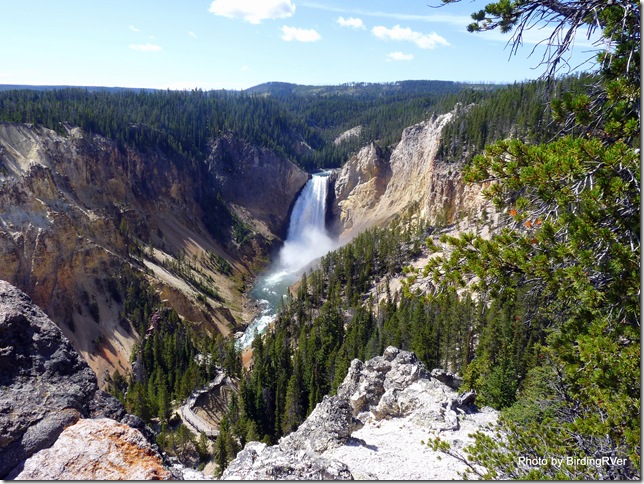 The trip from the Mt. Rushmore area was beautiful through the Black Hills. However, you come out on to this very arid plain that goes for hundreds of miles! It was similar to places in Nevada and Arizona, only the sage grows there.

It was close to 500 miles from Hill City, WY to Grand Teton National Park, WY, so we broke up the long drive and only did 220 miles to Casper for one night. We continued on to the Grand Teton the following day. You travel up from the flat land to pine trees in no time! There was a long construction zone just after Dubois. It delayed us a little with the one way traffic, waiting for the pilot car and zigzagging to avoid the potholes! We were so glad when we were back on nice hard black top again! Oh dear, how much stuff has fallen inside the Monty?? (Fortunately not too much went flying!)

Before you get through the Pass, you can see the mountain peaks miles ahead! Promising photo opportunities ahead!!

This should be great, our first time camping in a US National Park with the Montana!! We had reservations at Colter Bay RV Park adjacent to Jackson Lake, with full hook ups!! As with many national parks, they were built in the 1940’s when RV’s were a lot smaller and camping was less complicated. Unfortunately, due to cutbacks, they haven’t had any funds to update the campgrounds. This park has nice long pull through sites, as well as back in sites. We opted for the stress free pull through. Built into the side of the hill and terraced, most of the sites required extra leveling blocks to get the rig half way level! Probably due to erosion during the winter months, there were few “level” sites.

On the plus side, the General Store, the Colter Bay Café and the Colter Ranch House Restaurant were within walking distance of our site! Less than a quarter mile! We tried both places and had wonderful food at both! They also had a Laundromat, Horseback riding and rafting reservations office right there for your convenience. Plus walks along the shore of Jackson Lake were easily accessible, with excellent views of the peaks, great for morning shots of Grand Teton and Mount Moran! 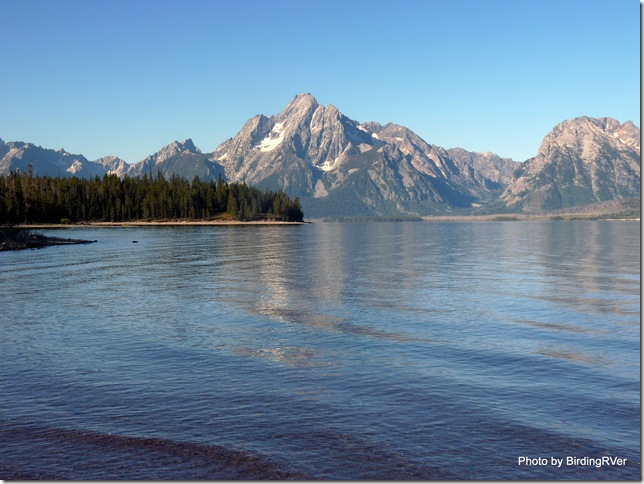 Our first day there, we decided to drive the “loop”, looking for wildlife in the big valley below the peaks. We only saw a pair of Sand Hill Cranes and ravens! Where are the buffalo and elk?! The other two times we were here, in the month of July, we saw lots of each! Coming to Moose Junction, we head back north along the base of the mountain peaks with majestic views. Big puffy clouds would appear in the early afternoon, which made for great pictures, but it also meant a thunder storm by the evening! 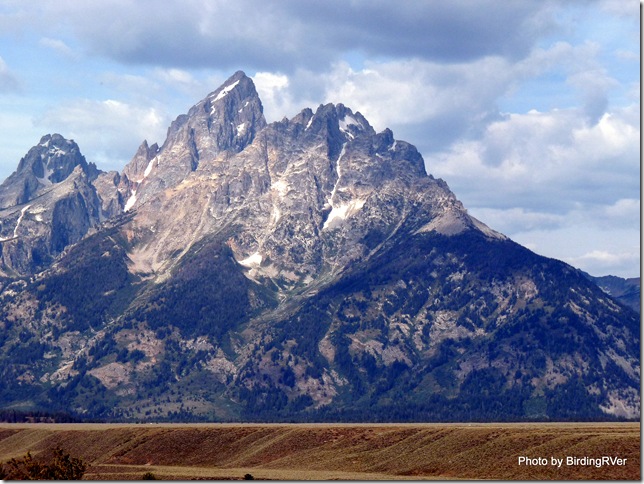 To Raider’s chagrin, the first 2 days there were like that! He is so traumatized by thunder storms in Montana’s Rockies and then in South Dakota’s Black Hills, that he just hears heavy rain and he’s panicking!! What can we say, he’s a “California Dog”, where we rarely had thunderstorms!

On a clear sunny day we did a day trip down to Jackson Hole, taking a scenic drive that places you almost at the feet of the big mountains and Jenny Lake. Great fun photographing the peaks from there! We continued on to Jackson Hole, just to give our furry buddy a chance to stretch and walk about town and window shop.

We returned to Colter Bay on a different route, to check out another campground in the park called Gros Ventre. This is only for dry camping or boondocking, no hookups. Camp sites were nice, not on top of each other, under the cottonwood trees, and a few big rigs had the only sizeable sites available. One section allowed generators, the other didn’t, which sounded fair to people camping in tents. It was a totally different climate there then up at Colter Bay. A lot warmer, more arid and some foothills block your view of the big Teton peaks. Still it was very quiet during the day, so we stopped and had a picnic lunch to enjoy the warm day. 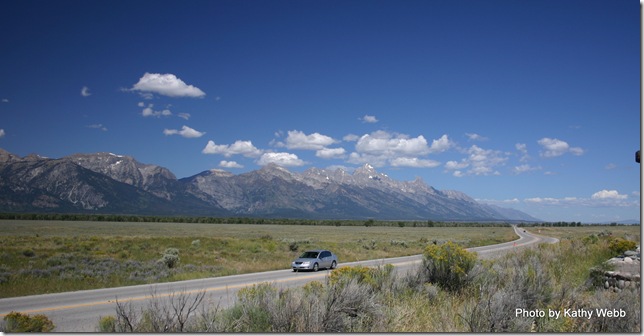 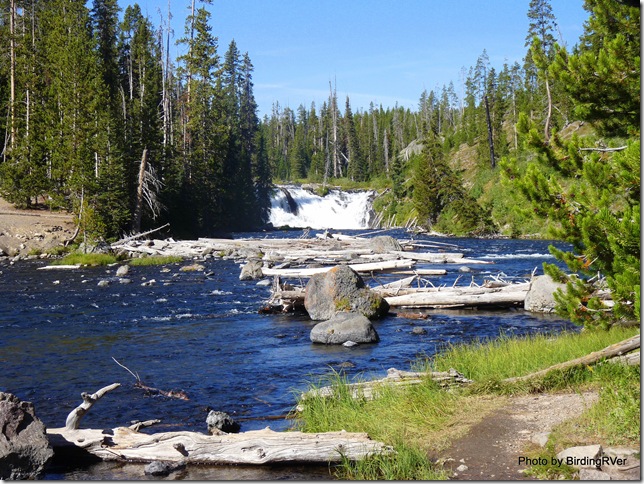 Our drive took us around beautiful Yellowstone Lake. It is larger than Rhode Island. (Actually you only get to drive around a portion of it because it is so huge!) Then on to Grand Canyon of Yellowstone, with all of its gorgeous waterfalls! 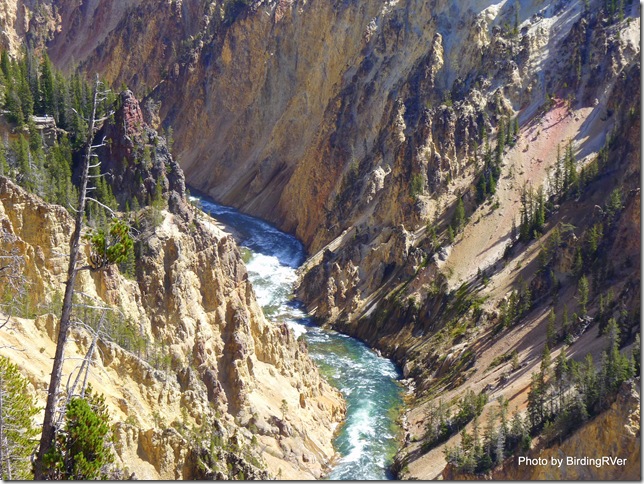 There are a series of stops where you can get out and see each section of the falls and canyon. 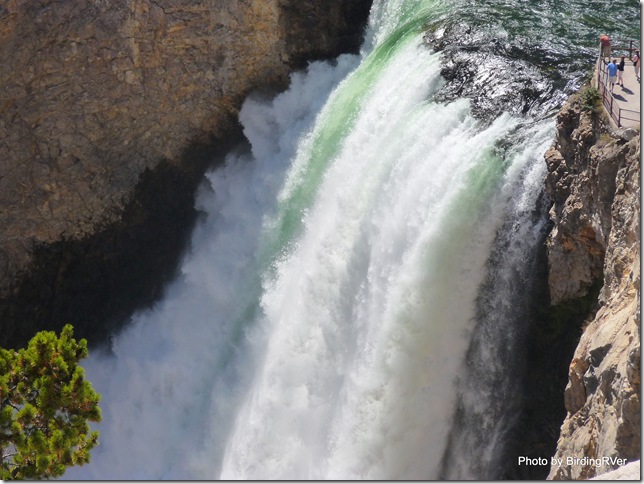 At one point, we could see a couple of young Osprey chicks sitting in their nest, hollering for Mom to feed them NOW!! I really think the one was so adamant he was saying, “and don’t forget the Fries!!” Their voices echoed off the canyon walls! Mom brought them a nice juicy fish, which they polished it off in no time! They are almost the size of the parents, flexing their wings as they stood on their lofty perch! Fledge time is just around the corner for them! 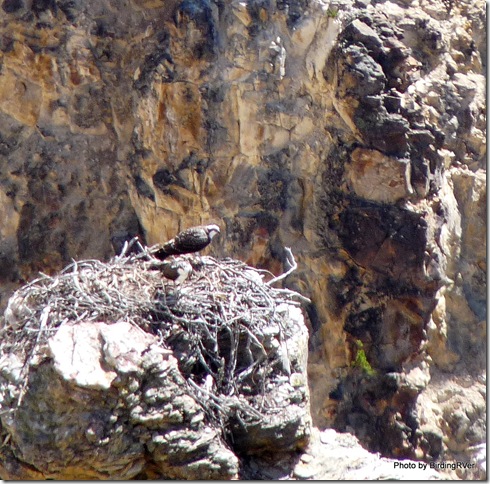 We saved the Geyser Basin over by Old Faithful for when we would stay in West Yellowstone, MT, it’s a shorter drive from there. However, we did get to see Dragon Geyser, belching steam from its cavern depths and bellowing sound roaring up at you! In 1985, our youngest son, Kevin, was only 2 ½. When we walked past there, he really did think there was a dragon in his cave!! I couldn’t help but agree! 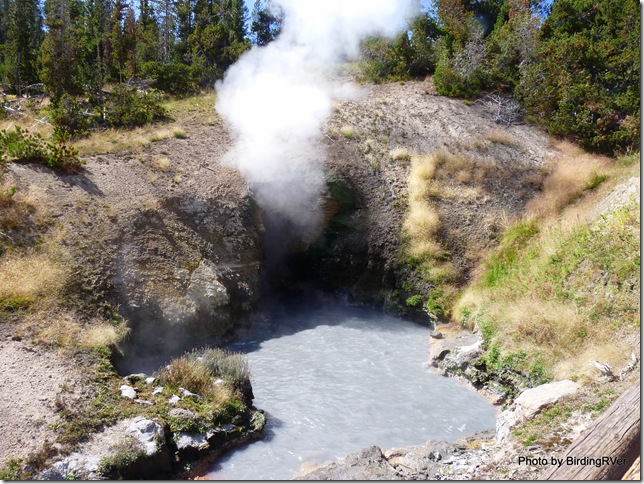 Friday, Sept. 4th, we woke up to a bright sunny day, perfect for traveling. No rain through the 8 mile construction zone between Grand Teton and Yellowstone. Happily, we saw our nation’s Recovery Act in motion, as they repair the highway systems of Wyoming and get more people back to work. It had been a few days since we had gone through this area, but we could see a lot of progress. They are working 24/7 to get the road work done before winter arrives!!

With only 90 miles to travel to West Yellowstone, we took a break for lunch along the Madison River. It was a perfect day to take in the view and relax! Where are all of the buffalo and elk? They must really be hiding out from the “paparazzi tourists”! We did see a couple of gaggles of Canada Geese working the river for lunch. However, they were keeping a wary eye on Raider! They must have thought he was a red wolf!

Continuing on down the road, we came to the town of West Yellowstone, Montana, where we stayed in May 2008, at Grizzly RV Park. It is one of the best RV parks we have stayed at in all of our travels! It has a beautiful layout of the camp sites, grass on both sides of your rig, very accessible utilities, plus you’re not on top of your neighbor bumping slides. They have the friendliest staff that bend over backwards to make your stay enjoyable.

Many more pictures on the slideshow

Posted by Grant and Kathy Webb at 3:16 PM