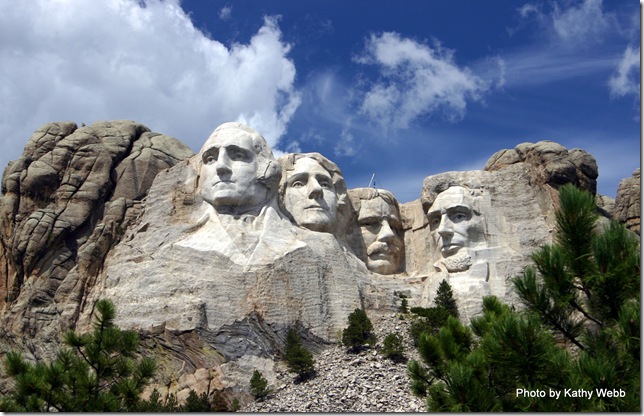 Mount Rushmore is as iconic an American place as I can think of. Three million people each year make a pilgrimage to the South Dakota Black Hills to see the carved faces for themselves. It truly is one of those places that you have to see for yourself to get an idea of just how big this carved mountain is. Each head is 60 feet high, but reading that and looking at the pictures just doesn't give you the impact of the size. 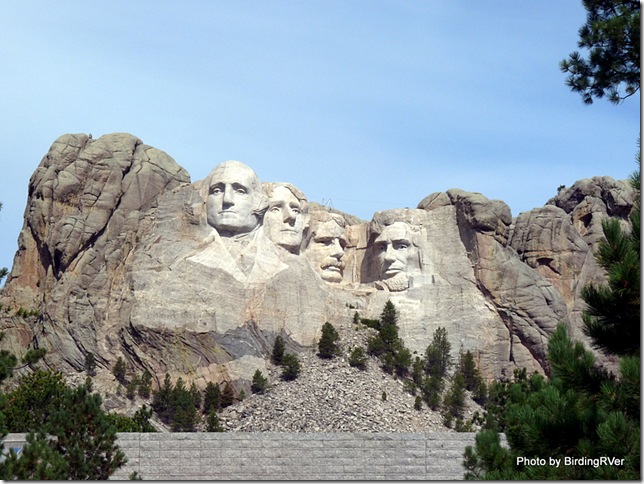 The National Park Service offers audio wands that explain the history of Mt. Rushmore. They also have a museum and films about the construction of the carvings. Mt. Rushmore was first conceived in 1923 by Doane Robinson as a way to bring tourists to South Dakota. Apparently he had the right idea sine 86 years later it still is the number one tourist attraction in South Dakota. Robinson contacted a well known sculptor Gutzon Borglum, who was working on the Confederate Memorial being carved on Stone Mountain in Georgia. Borglum visited the Black Hills in 1924 and 1925 to find the right rock and lighting for the carving. In 1925 Congress authorized the Mount Rushmore National Memorial Commission and in 1927 Borglum and hundreds of workers start sculpting the faces onto Mt. Rushmore. Gutzon Borglum continued to work on Mt. Rushmore until his death in 1941 and then his son Lincoln finished the work. 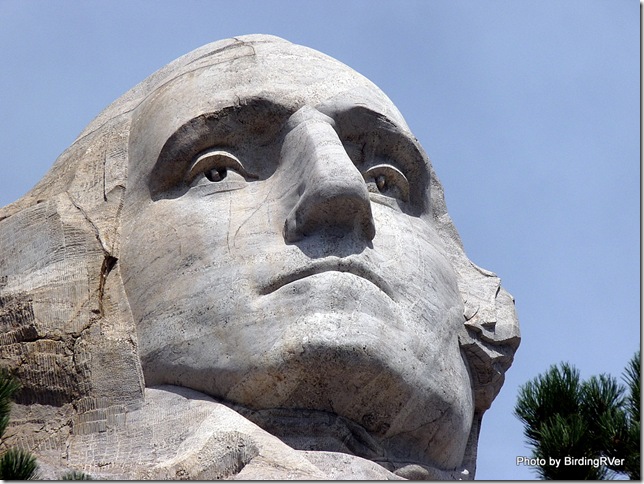 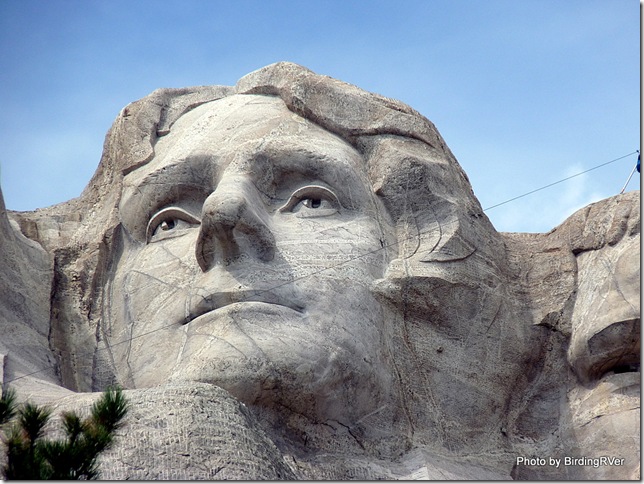 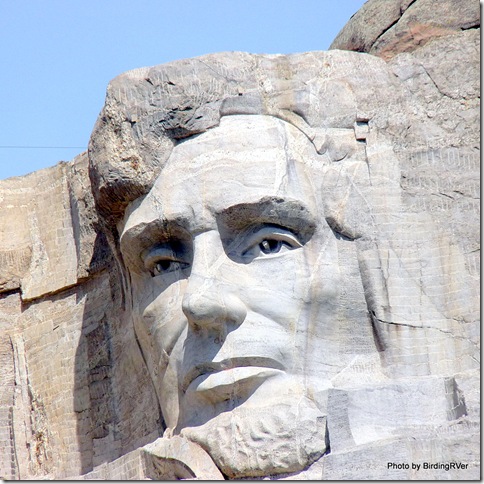 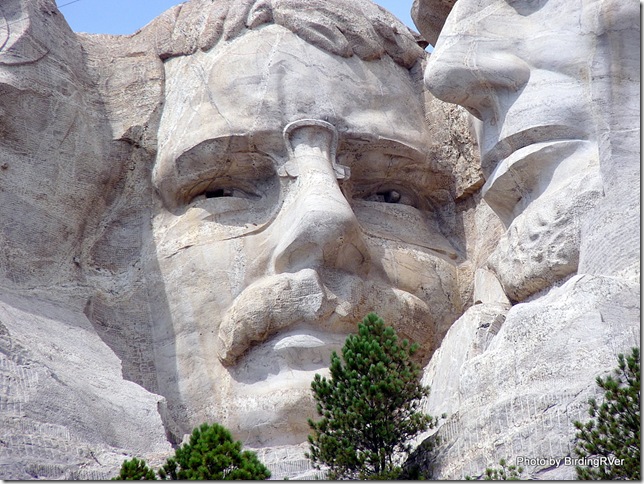 As you follow the trail around the monument you see the familiar carved heads from many different angles and can get some very good views of each head as separate sculptures. 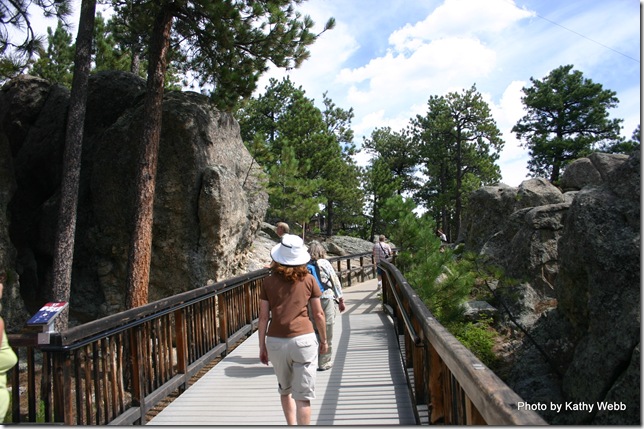 The original plan was to have Washington with Jefferson at his right shoulder and Lincoln on his left shoulder. However after they started sculpting Jefferson it was found that the rock in that area wasn’t going to work so they changed the plan. 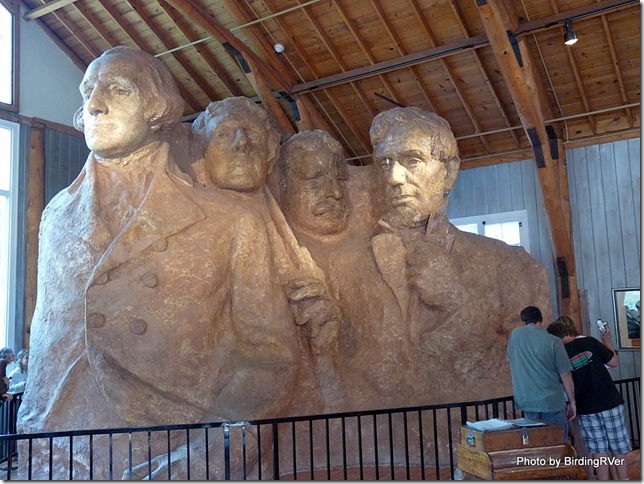 This is a picture of Borglum’s final model

The plans for the design changed 9 times and each time Borglum would build a new model, so that the carvings on the mountain could be made to scale. Borglum had been a personal friend of Theodore Roosevelt and decided to add him to the mountain. In 1937 there was a movement to add Susan B. Anthony to the mountain, but the bill never got out of Congress.

You will notice that in the model above the Presidents have hands and that Washington has a coat with buttons. The original plan had been to carve each figure to the waist. However, as funding dried up they only completed the heads. 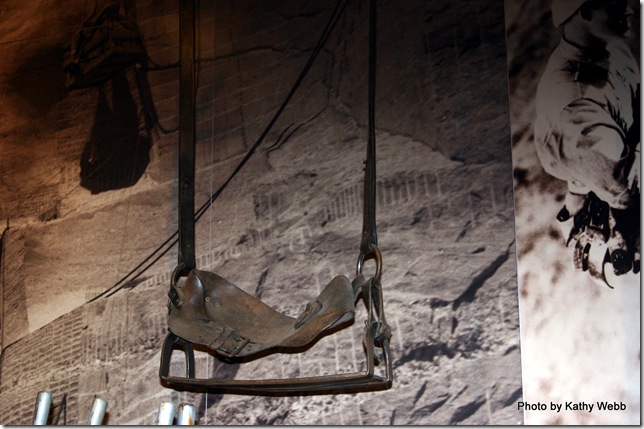 The workers hung from the top of the mountain in these Boson chairs as they used jackhammers, drills and packed dynamite. Amazingly in the 14 years of the project no one was killed.

As always there are a lot more pictures in the slideshow

Posted by Grant and Kathy Webb at 1:46 PM