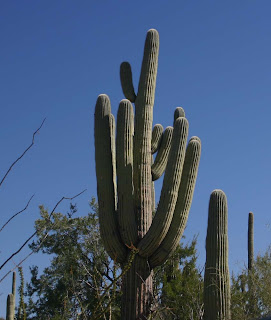 We have started to get around again after being sick. Our first venture out was to the Saguaro National Park to drive one of their scenic dirt roads. We did is on the Sunday of the Presidents Day weekend. As we drove by the Sonora Desert Museum the parking area was so busy people were parking in the dirt off the road. We continued on to Saguaro National Park and found most turnouts and parking areas to be very busy. It is funny but, a month ago I had written about how strange it was to have the state park in Yuma all to ourselves and now I am surprised to see other people in the parks. The scenic loop was 5 miles of “high ground clearance” road. When I bought the truck to pull our 5th wheel I debated buying 4 wheel drive or not and finally did because it wasn’t any more expensive and there were a lot more available. I can’t believe how many times we have used the 4 wheel drive just in the past month.

The Diamond J RV Park is a new still under construction RV Park 10 miles outside of Tucson. The RV Park is adjacent to Tucson Mountain County Park which is 20,000 acres. The county park is in turn adjacent to Saguaro National Park which is another 90,000 acres. So Diamond J sits out here in the desert far from everywhere and is very quiet. The down side is it is 10 miles just to get back to town and a long drive pretty much anywhere. It is a 30 mile round trip just to get groceries! After being stuck in the trailer for most of a week due to illness we had to run errands and buy groceries. It is 15 miles in one direction to the grocery store, 20 miles in a different direction to Camping World, and 25 miles in yet another direction to our credit union! Also due to construction all of the on and off ramps to I – 10 in central Tucson are closed. It took us 4 and half hours and 55 miles of driving just to go to the credit union and to buy groceries.

For years I have heard Retirees say “I don’t know when I had time to work”. I always thought they said that because they were doing so many new things but, now I find it just takes so long to run errands! A typical day we get up at 6 AM but aren’t ready to leave until 9:30 or 10, then 4 plus hours to run an errand and we are back just in time for afternoon nap, with luck we wakeup just in time for happy hour and dinner. A whole day gone just running one errand!

The total lunar eclipse on the 20th was clouded out here in Tucson. It had been cloudy in the morning but, cleared up nicely in the afternoon, toward sunset the clouds came back. All we saw was a little of the beginning through the clouds. Next chance is December 2010.

We have added Brewers Sparrow and Phainopepla to this year’s bird list. 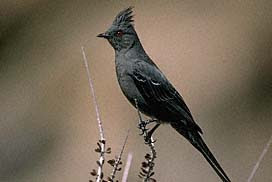 Posted by Grant and Kathy Webb at 4:17 PM