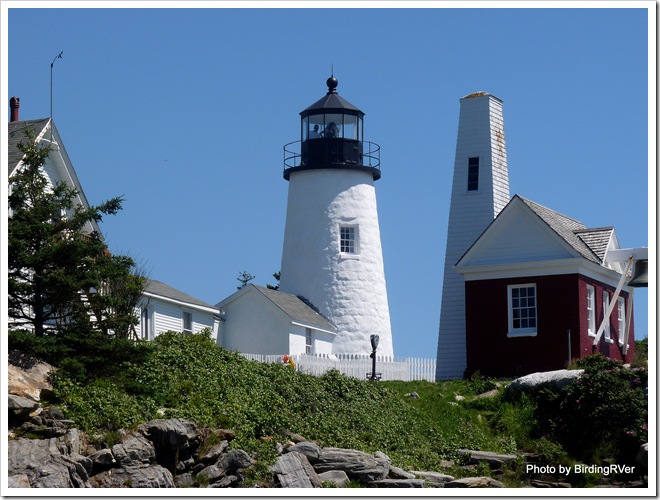 Maine has 3,300 miles of sea shore because of all of the coves it has, so it has 61 lighthouses! A Docent told us that only 12 can be reached by road. There are so many little islands that it’s hard to tell whether the land is a peninsula or an island! And there aren’t too many sandy beaches to be found. The rocky coast is made up of huge granite slabs extending out into the sea and then dropping off! In some places they have fjords that drop off from the rock shelf it is so deep! It reminded us of the shores of Nova Scotia, just about 100+ miles across the bay from Maine’s coast line.

While in Augusta, Maine we went exploring the sea shore and found the Pemaquid Lighthouse, which was commissioned in 1827 when John Quincy Adams was president. The contractor mixed the mortar we sea water and the tower had to be replaced in 1835. Pemaquid Lighthouse, is only 38 feet tall. That makes it one of the easiest lighthouse to but the steps are very narrow and steep. 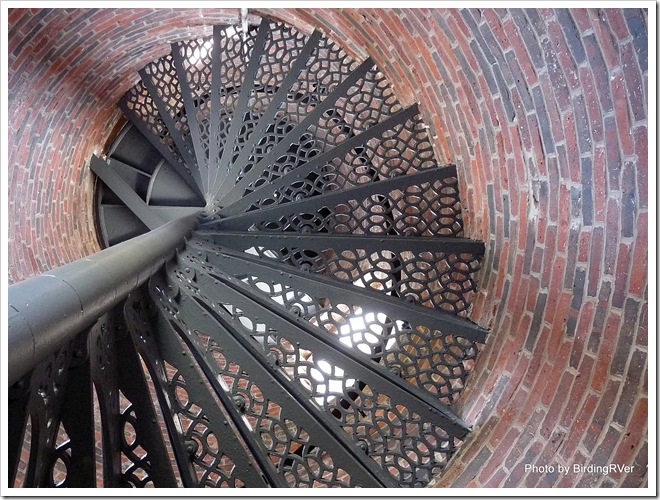 Pemaquid Lighthouse, is only 38 feet tall and 10 feet wide at the top. That makes it one of the easiest lighthouse to climb but the steps are very narrow and steep. 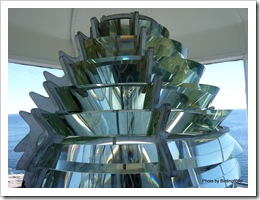 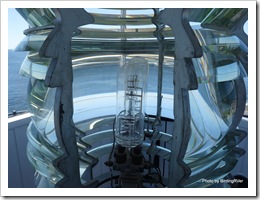 The Fourth-order Fresnel lens at the top of the lighthouse. 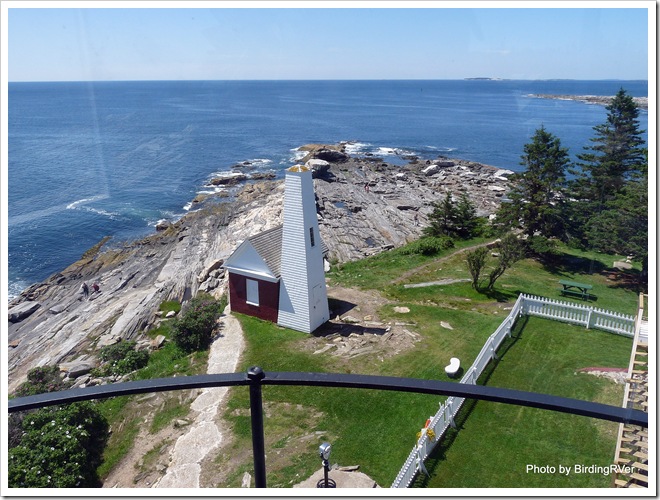 The view from  the top of the lighthouse. 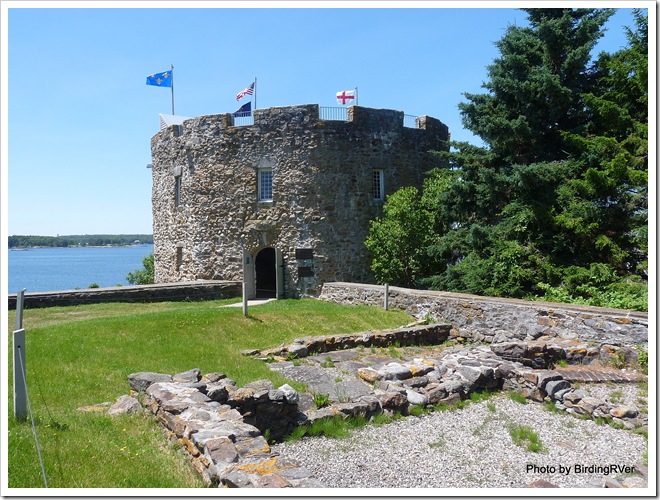 The tower Bastion of Fort William Henry, rebuilt in 1908.

Very near Pemaquid Lighthouse is a Maine  State Park and the site of Fort William Henry. This area along the Maine coast has a fascinating history of a repeating cycle of settlement, Indian trouble, pirate attacks, political problems, abandonment and then settlement again. I had no idea that pirates raided this far north. Depending on who controlled the area it could be French or English pirates. The local Indians may act on their own or again, depending on who controlled the area could be allied with either the French or the English. Political problems because Maine wasn’t thought of as a separate colony, but as a part of Massachusetts. In an effort to hold the area the Massachusetts Governor spent two-thirds of the colony's budget to construct a stone fort. The fort built here was extraordinary for its time. The workers used 2,000 cartloads of stone, build walls 10 to 22 feet high and a bastion 29 feet high. The fort housed 20 cannon and a garrison of 60 soldiers. Yet only 4 years later local Indians upset of their treatment by the English allied with the French and easily defeated it. 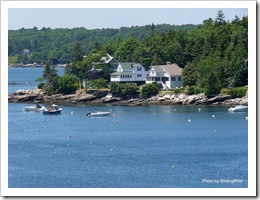 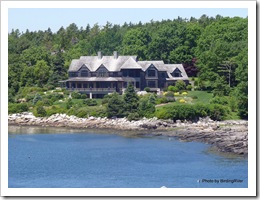 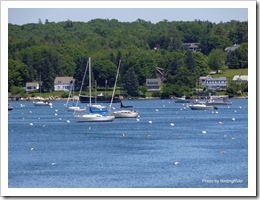 Views from the top of the Bastion. 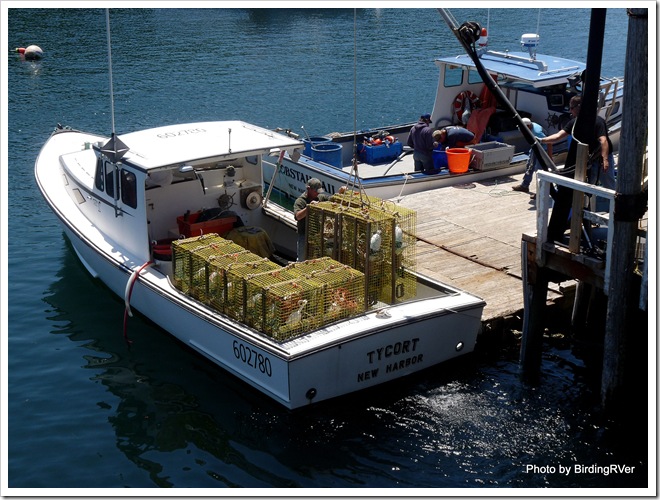 I took this picture of a Lobster fishermen loading  his traps as we had lunch on outside deck in the harbor. Along the Maine coast there are so many lobster traps that you could almost walk to Canada on them. 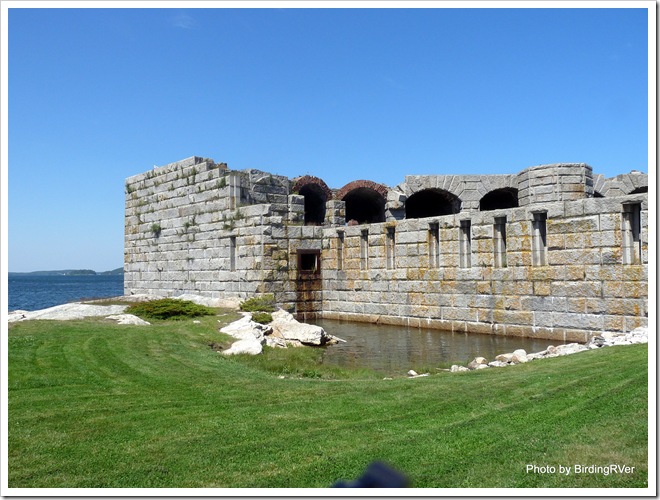 The backside of Fort Popham at the mouth of the Kennebec River.

In 1861 construction began on a granite block fort at the mouth of the Kennebec River to protect the Bath Ship Works and the Maine capitol at August from any attempted attacks by Confederate Raiders. The fort had 30 foot high walls, was 500 feet in circumference and contained 36 cannons.  In 1869 worked stopped on the never completed fort. 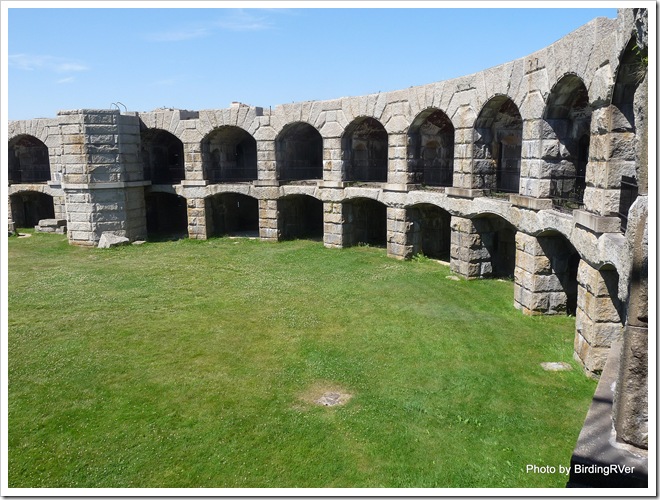 Two tiers of vaulted casements for the cannons. 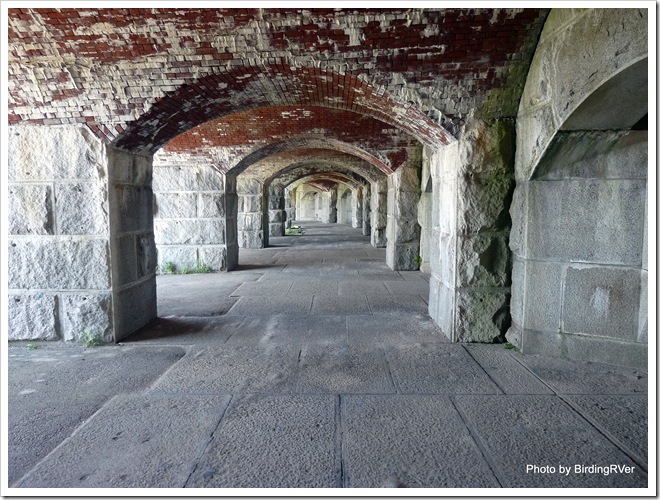 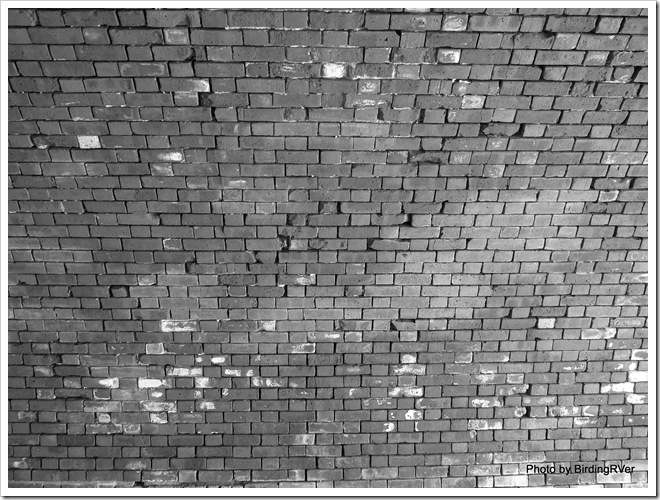 The vaulted brick ceiling is still holding up pretty well.

More pictures of our daytrip in Maine: