From Washington DC to Augusta, Maine 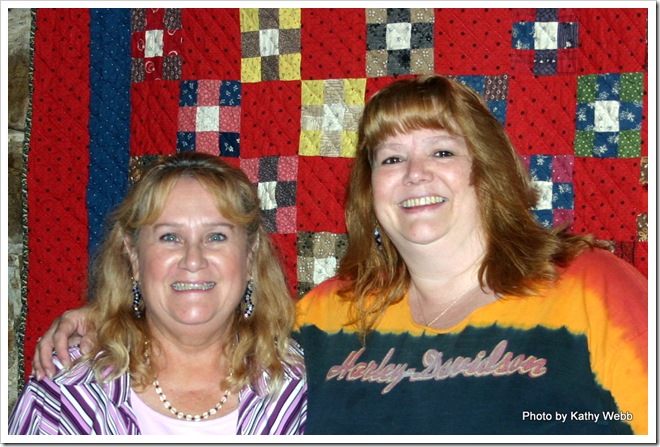 Kathy here to be your tour guide! Leaving Washington, DC we headed for Pennsylvania for a visit with Grant’s mother, who lives in Johnstown, for two weeks. The closest RV park we could find was in Somerset, PA about 30 miles away, at Pioneer Park Campground. We had found that there aren’t too many campgrounds in Pennsylvania and this was a very popular one! During the week we practically had the place to ourselves, but come Friday it was brimming with weekend campers! Families have been coming here for years. There were three fishing ponds, a great big swimming pool, campfires and an arcade for the teenagers! We could see why this would be perfect for families.

One day I took a ride over to Bedford to meet up with my friend Chelle Moreau, who is one of my several Chatty Cyber Chicks online! She was visiting friends there before heading back home to New Jersey and we met at the Jean Bonnet Tavern for lunch. 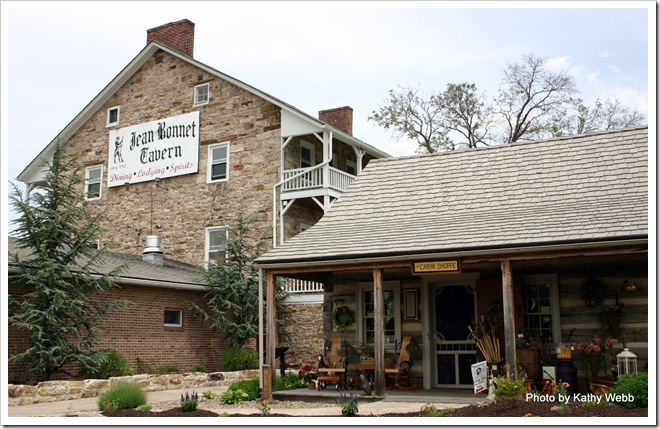 It is a very historic place, dating back to 1779. The inn upstairs is very charming and is suppose to be haunted. Chelle has stayed a couple of times in the inn but never saw any ghosts.

The tavern is downstairs, with beautiful handmade quilts lining the old rock walls like tapestries. They have an extensive menu and delicious food. Since we were both driving we didn’t get to taste their local beer. After lunch Chelle took me on a tour of the inn, with all of its comfy rooms and beds! I wouldn’t mind staying here to see if there really were any ghosts. There are several murals on the walls of the halls, one being of the cat that haunts the place at night! 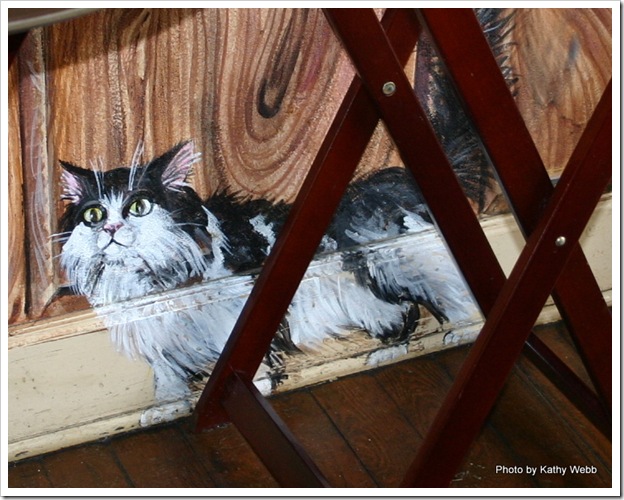 The hours flew by too fast as we sat gabbing! Chelle had to get back to New Jersey and I needed to get back to Johnstown, but it was so much fun getting to finally meet her in person after nearly a year and a half!

We stayed in Somerset through Memorial Day Weekend. That was a relief! The park had a cancellation and told us we could stay after all. With so few places to stay in Pennsylvania, we were very appreciative!

June 1st we headed north and stayed one night just west of Allentown, PA. Our course was going to bring us through Hartford, CT and it just so happens I have one more cyber friend to meet who lives near there! So we planned to meet in a few days to give us time to get up there.

Originally I was born in Brooklyn, NY, when I was 18 months old we moved out to Long Island until I was 7. Unfortunately, we wouldn’t be visiting Long Island. Grant wanted to avoid driving through New York City with the rig. So we headed north and west of New York City and stayed in Gardiner, New York at the Yogi Bear Jellystone RV Park. A very nice park, very well planned out with great big open areas in between the sections and not all cramped together. We would have liked to have stayed a few days, however the weekend nights were $65 a night! That was $20 more a night than weekdays!

Searching the internet for a nice place to stay between NY and CT became impossible! However, just an hour’s drive north of Hartford in western Massachusetts, we found a park away from the highway where we could stay several days inexpensively.

We met Bette and her husband Dave for lunch at Chili’s in Southington, CT. We parked the rig in the big shopping center next door ! The new grocery store wasn’t opened yet so we had all kinds of choices of where to park the Montana. Raider was very confused when we got him out of the truck and had to bribe him into the trailer! I had the Fantastic Fan going in the bedroom as well as the 12 volt fan on the dresser to keep him cool while we had lunch. 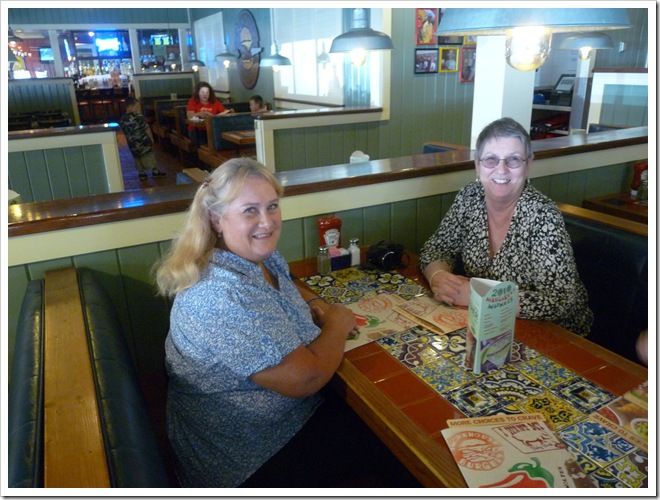 It was great to finally meet Bette! With all of our daily emails back and forth for the last year and a half, it was as though we knew each other already! However, it was so nice to place a face with a name! Dave is an antique dealer and is always busy with traveling through New England for antiques, so they gave us some pointers on what to see in Maine. I wished we had more than an hour and a half to gab, but the temps outside were rising due to an unseasonable heat wave! And there was our Raider buddy to be concerned about, so we all returned to the rig. He was more than happy to see us and yes it was quite comfortable inside for him. I thought his blog fans would like to know!

I gave them a demonstration of how the 4 slides open out on both sides and make it into a very comfortable “mini-condo on wheels”. With hugs and warnings about getting through Hartford, we said good bye and were off to Massachusetts.

Massachusetts has a lot of “Hamptons” and our KOA was in West Hampton, well off the beaten path, down scenic country roads and gorgeous estates, I really was waiting for Martha Stewart to pop out at any time from one of those very fashionable homes!

It was an older campground recently switched over to KOA and the owner was in the process of modernizing the park. Our escort had us wind through the seasonal section of the park, where people can leave their RV’s and come back on the weekends. The gravel road could use some work this summer! Soon we came out into a meadow and found we had the entire meadow to ourselves! Only problem was that Grant had asked for full hookups, which means water, electric and sewer. We’re looking all around and asked, “So where is the sewer hookup?” He told us, “Oh you won’t find any in the pull through sites, only in some of the back in sites. However, right over there next to the road you came up is the dump station. So you can pull through there to empty the tanks.”

Well, none of the back in sites were long enough for our trailer, they were mainly for short travel trailers, plus there were trees to contend with back there! We decided to just stay put, we could easily stay a week without worrying about the tanks. 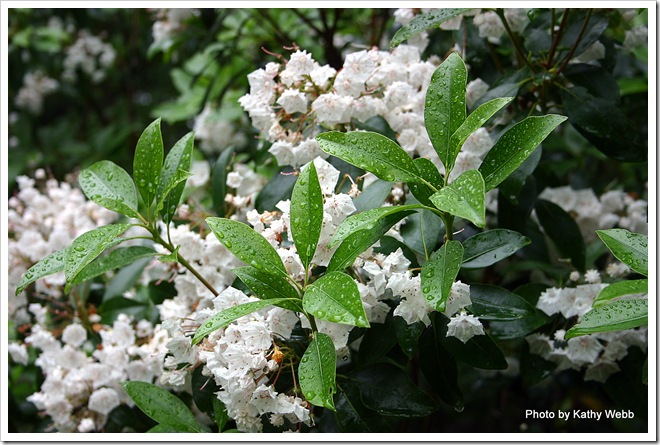 Heavily wooded in the surrounding area, you would think you were in a national forest. Mountain Laurel trees were blooming everywhere with their bell shaped flowers. The park was pretty long, so we had great walks with Raider checking out the area. Cardinals and Blue Jays serenaded us through out the forest. 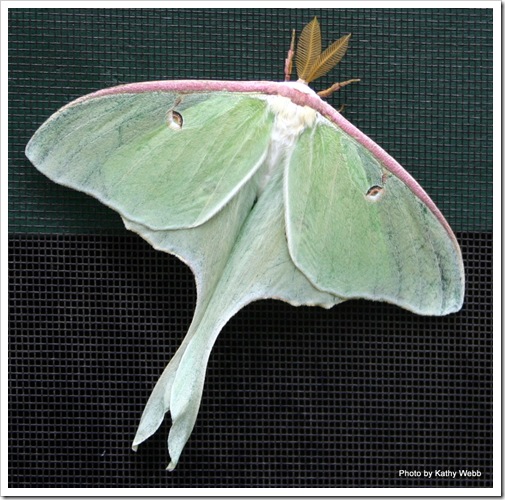 I spotted a Luna Moth on the screen door to the laundry room. From the wings to tail tip it was about 4 inches long. Nocturnal, he was snoozing away there during the day and off to find a mate at night. Sadly, we read they only live a week!

While here, a series of severe thunderstorms rolled through. We had several days in a row where the weather alert radio was blaring Tornado Watches! In Massachusetts?! The alert went as far north as Vermont! We had some thunder storms and wind, but nothing to worry about. Very freaky weather!

After zooming through 5 states in a couple of days, we stayed here 8 days. It was very quiet and relaxing. Because of all of the trees we gave the satellite TV the week off, got more reading and beading done instead. However, we could use the “bat wing” antenna on top of the rig for local TV stations, especially to keep track of the weather!

Our next destination was Maine and at least we could surf the internet to plan our trip. We found another KOA in Richmond, Maine, just south of Augusta to stay a week and explore the area. One thing we’ve found out about Maine, it is all about steep hills, there are so few flat areas! The RV park is a couple miles off of 95, so there was no road noise, but then it was situated on the side of a steep hill. All of the sites were terraced into the hill and very level. But walking to the office or the laundry room was a steep walk down hill and then back up! Just walking Raider was a workout each day!

They call small lakes “ponds” up here in Maine. If you continued down the road from the KOA, you came to Pleasant Pond. I’ve seen smaller lakes in other places! This was a huge “pond”, about 2 miles long and half a mile wide! There were several beautiful houses along the shore with boat docks. They must make beautiful summer homes!

While in the Augusta area we were able to get our cholesterol blood tests done and faxed back to our doctors in California. Plus, Raider needed his Bordatella vaccination updated, so we found a vet that could do that, too.

Posted by Grant and Kathy Webb at 2:38 PM