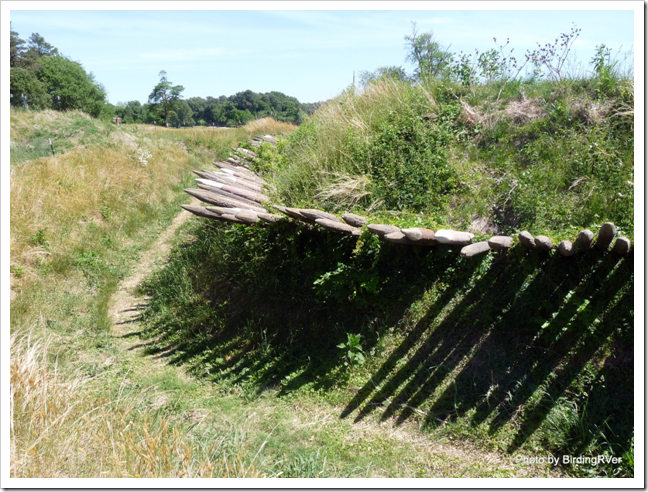 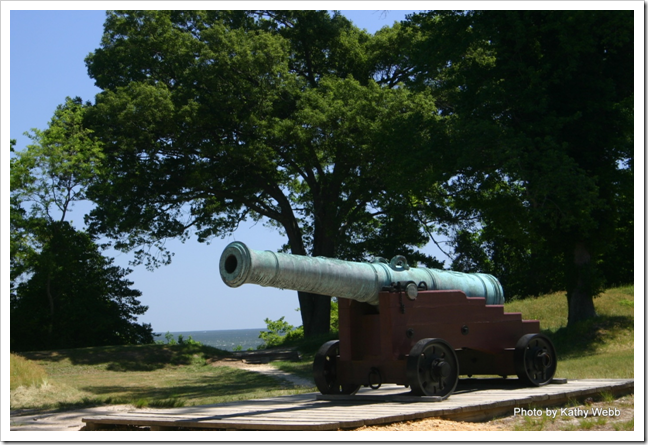 The third site in Williamsburg’s Historic Triangle is Yorktown Battlefield National Park, the site of the last battle of the Revolutionary War.

This day we had the best weather of all of our time in the south. It was mid-70s, wind blowing in off of Chesapeake Bay and no humidity.

Although, the finally treaty wouldn’t be signed for almost two years after this battle. The September, 1781 battle at Yorktown and the surrender of General Cornwallis is the last battle of the Revolutionary War.

When we first arrived at the Yorktown National Park we watched the Orientation film. It is always a good idea to start any National Park visit with the orientation film. These films explain why this park is important and where the more important sites to see are located. As the film ended there was a Ranger interruptive walk beginning so we decided to join the 45 minute walk. We seldom go to Ranger Walks or Ranger Hikes anymore due to budget cuts there aren’t as many as there use to be and the ones that are still on the schedule tend to be very crowded. This Ranger walk was quite full but not too bad. The Ranger must have been a retired History Professor. Our “45 minute” Ranger Walk went half an hour overtime and not one person left before the end. The Ranger was quite fascinating, brought us all up to par with our history lesson for the day. He explained that if it hadn’t been for the French and General Lafayette, we would all still be English citizens!

Here is this group of colonists standing up to the King of England, with the strongest Army and Navy in the world! What were these colonists thinking? How could we win against a force like that?!  Since the French had been fighting against the English, they were all too happy to help us fight them as well! 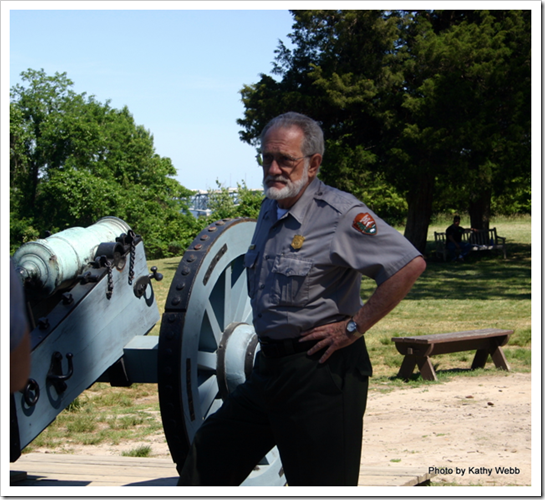 General Cornwallis had been ordered by his superiors to go to Yorktown which had a good deepwater river where he and his men would be sent supplies, enforcements and if need be they would be picked up by British War ships and taken to New York. What the British had not planned on was the arrival of the French Fleet in the Chesapeake Bay and the addition of 3,000 French troops and cannons to arrive with the fleet. Washington marched his army from New York to Virginia and French General Rochambeau arrived with his army of 4,000 soldiers. General Cornwallis was now facing over 17,000 American and French soldiers against his 8,300 British soldiers. 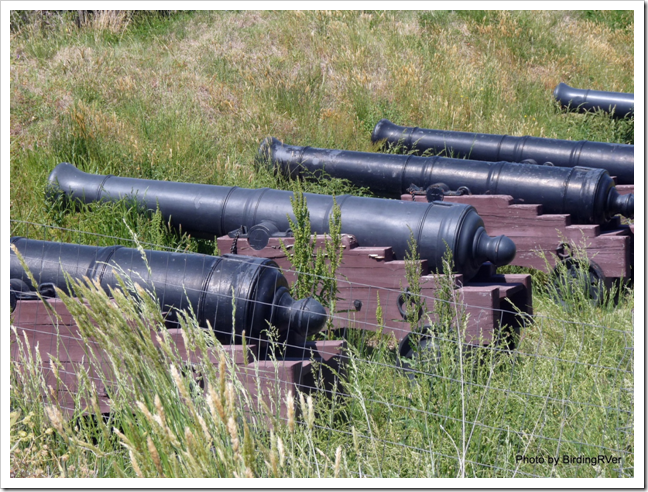 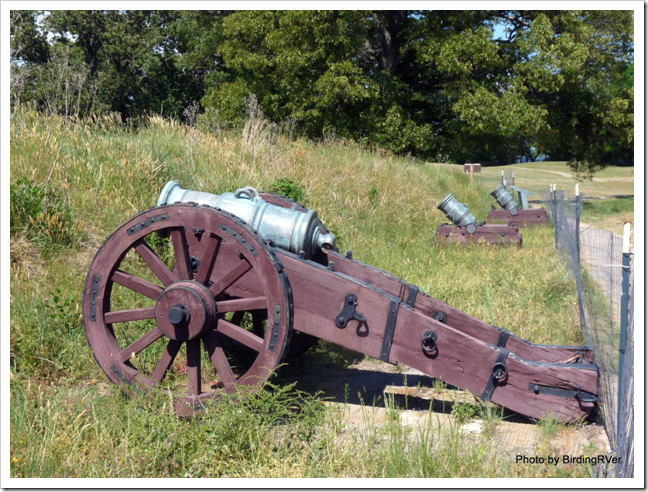 The American and French armies formed siege lines and bombarded Cornwallis and his men day and night with cannon fire.

Part of the siege line 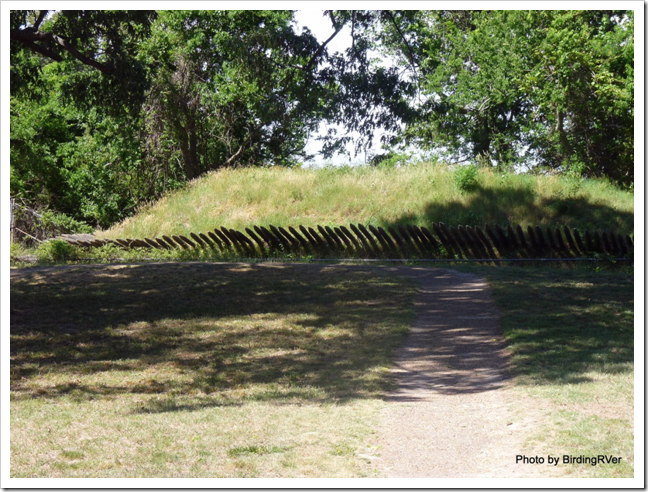 The British Fleet sent to aid Cornwallis was defeated by the French Fleet at the mouth of the Chesapeake Bay and it returned to New York. With the American cannons only 400 yards from his positions and no hope of rescue from the fleet, Cornwallis surrendered. General Cornwallis had to surrender his sword here and lay down arms before General Washington!

As a side note: Later when we visited the Smithsonian Museum in Washington, DC, we had the pleasure of actually seeing Cornwallis’ sword on display. History came alive at that moment!

I have always wondered why the British just gave up the 13 colonies after losing this one battle. The National Park Service sums it up this way: “Though the British still had 26,000 troops in North America after Yorktown, their resolve to win the war was nothing like it had been before Yorktown. The war had been lengthy and costly. Replacing Cornwallis' captured army was a questionable proposition, particularly because the British also were engaged in military struggles in India, Gibraltar, the West Indies and Ireland. Thus, the British Parliament in March 1782 passes a resolution saying the British should not continue the war against the United States. Later that year, commissioners of the United States and Great Britain signed provisional articles of peace. In September 1783, the final treaty was signed which ended the war and acknowledged American independence.” 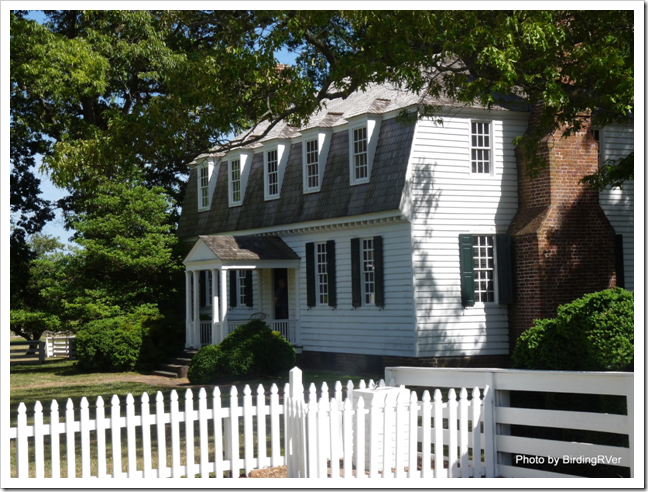 The original Moore House where the terms of surrender were worked out. 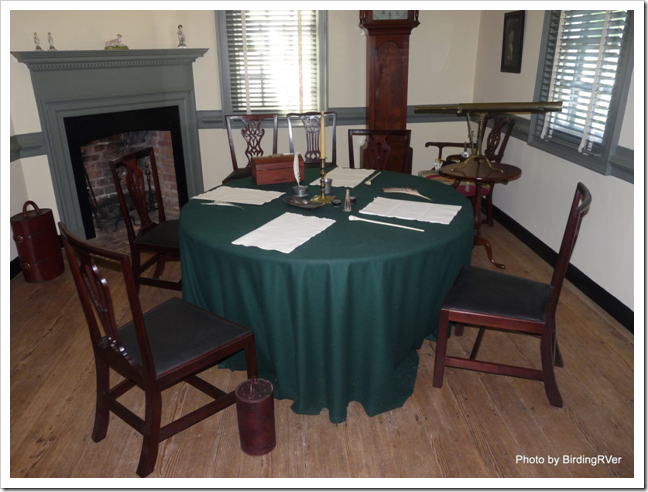 Inside the Moore House 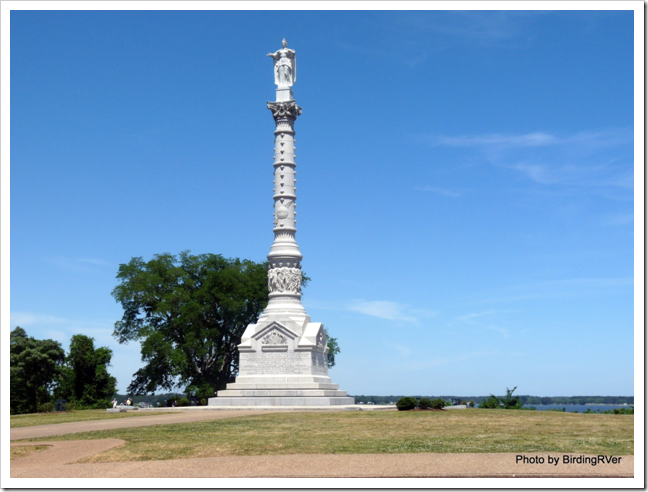 I think this monument is proof that Congress never changes. When news of the victory at Yorktown reached the Continental Congress in Philadelphia they immediately passed a bill to have a monument erected to mark the occasion. This is that monument it wasn’t built until 100 years after the battle!

After visiting the Yorktown Battlefield, we went into the town of Yorktown. We had a wonderful lunch along the waterfront at Nick’s River Walk Restaurant. !  The restaurant is right next to Pullman Bridge that takes you over to Gloucester.  We watched as a pirate ship went sailing by, giving tourists a sail about the bay. It was a gorgeous day with a breeze coming off the water, making it at least 15 degrees cooler than back at camp!

Posted by Grant and Kathy Webb at 4:11 PM