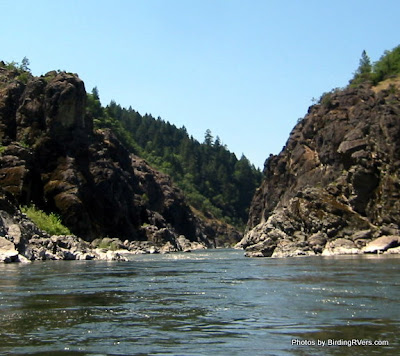 We were only staying in the area for three nights, which was good thing as the temperatures were in the mid-90s. On a hot day what could be better than a jet boat trip on a river. Our MOC group got together and went down the Rogue River to Hellgate. Hellgate is where the Rogue begins to narrow into a canyon. The trip was 36 miles long and took a couple of hours. The driver of the boat would spin, turn or jump wakes of other boats periodically to get everyone in the boat wet. Being wet and going 60 MPH on the river can certainly cool you off. NO ONE COMPLAINED about being wet! 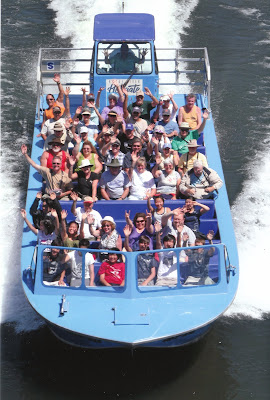 The above picture was taken by the Hellgate Jet Boat Excursion people. The large group in the back half of the boat is 27 of our 44 MOC people.

On the second day at Rogue River State Park, Kathy and 7 other people from the group went on a tour of Fire Mountain Gems. This is an internet company that is to beaders what Amazon.com is to readers. (Kathy shops here often!)

Valley of the Rogue State Park is bordered on the south by the Rogue River and on the north by I-5. It is has many grassy meadows and mature trees. Even though the temperature was in the mid-90s we did see several birds both in the state park and while on the river:

Osprey (several in many locations along the river)

Slideshow from our Jet Boat Trip

Posted by Grant and Kathy Webb at 9:31 PM