Grant is taking to heart this life of relaxation here in El Centro, so Kathy thought she would bring you all up to date!

Like everybody else, December was busy with family, friends and all of the medical doctors, dentist and eye doctor! It seemed like we had something going every day of the month! We’d wake up each morning going, “who do we see today? Friend or doctor?”

Among the benefits of returning to Coyote Valley RV Resort were all of the familiar faces. Rita, who works in the office, was there last year and remembered my jewelry creations. In front of a big group of people she asked, “Hey Kathy, did you make any jewelry this year on the road?! We’ve got to see what you’ve made. Maybe we should have a little show!” I busily went through the creations I could part with for a price, made a display and brought it over to the office/gift shop. The manager, Bonnie, loved my stuff and allowed me a spot in the store to display them all month for free! She, herself, ordered several goodies! In between doctors visits I was busy designing more items and did very well for the month! Now to go to Quartzsite and stock up on more supplies!!

On Christmas Eve, we were invited over for brunch at our long time friends, Pam and Gary’s house. Pam made a mouth watering Quiche Lorraine we all enjoyed! We were cozy by the fire with beautiful Christmas music in the background. I felt like we were at someone’s B&B! 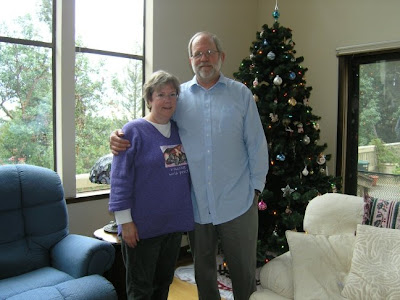 Since it was raining, we let Raider guard the Montana for us, while we visited them. Their big lovable collie, Duffy, must have remembered us, because he nearly barreled through the screen door trying to get to us!! I could just imagine him and Raider having a grand old time running through their house, like they used to do in our big backyard in San Jose!!! Good thing we didn’t bring our buddy, I could just visualize him being a “bull in a china shop”!! So to Raider’s fans, he is quite OK, we just gave him the day off!

Since I am pyrophobic, we have never turned on the gas oven. You have to light it each time you use it, due to the fact there isn’t a pilot light. I don’t work well with flame throwers! However, I use the microwave/convection oven all of the time. But to make a perfect Christmas dinner I would need my old double oven I had back in the house. We did the next best thing, we ordered a Turkey Dinner from Lucky’s. All the fixings included a cooked 12 lb. turkey, stuffing, mashed potatoes, gravy, a couple of side dishes, dinner rolls and one of the biggest Pumpkin Pies I have ever seen! Perfect for an RV!

Christmas Day we had Kevin, our youngest son, and his girlfriend, Veronica over for dinner. Raider wanted to be his brother’s lap dog the whole time!! We had fun opening presents and catching up from the last time we had seen them. For me, it was a mixed emotion feeling, because I enjoyed seeing them but knew we’d be back on the road and several months until we see them again!!

We were going to leave the 26th, but there was too much to get down in half a day! Between put away the Christmas tree and decorations, laundry, groceries and repack the basement, we decided to wait until Monday the 29th. “Maybe we’ll beat the traffic.”

Ha, were we in for a surprise! We think the traffic jam on Highway I-5 went from one end of the state to the other! At least we were going at the speed limit, but there were lots of other people going up and down the state that day!

We stopped for the night at Orange Grove RV Park in Bakersfield. You actually park in the grove, with trees just dripping with delicious oranges, free for the picking, too! As we walked Raider that afternoon, we came upon a familiar Montana and knocked on the door. Sure enough, it was Butch and Susan from the Montana Owners group we met in Quartzsite last January!! They were on the way down to Niland, past Palm Springs and we were headed a little farther down to El Centro. We promised to catch up and go to their favorite restaurant here in El Centro one day this week.

Friday morning we get a call and it was Butch. “How about we meet for lunch at Camacho’s today?” “Sure!”

Camachos is an authentic Mexican cuisine restaurant that has been in business for 65 years! It is out among the fields of hay growing south of the town. Our GPS was telling us the Mexican border was just south of us by a mile or so!! Very unique food, however they did not serve margaritas, only soda and beer! This place is always busy with the locals, because they are the only ones that know how to get there!

Not only did we meet up with Susan and Butch, but other Montana Owners, Pam and Ray came down as well. We also met them at Quartzsite last January. It was great catching up on what we all had done this past year! Especially with all of the other Montana Owners we had bumped into during that time period! Naturally plans were made for this year’s Rally in Quartzsite beginning January 17th. We all were hoping we could get the same area we had last year, because it was just perfect for a large group of 40 Montanas!!

When we got back to camp, Grant whipped up the “Webb Family Margarita Recipe” that our son, Tim, had perfected! His were outstanding when we visited him in October, since he made it in his ice cream maker! It came out like a perfect “Adult Slurpee”. Since we’re “roughing it”, Grant made it the old fashion way with a blender! They came out very good! So we toasted the sunshine and warm temps we finally found!

Being at Sunbeam Lake, it is a magnet to water fowl out here in the desert. We have seen:

Cattle Egrets, by the thousands

Double Crested Cormorants, by the hundreds

Posted by Grant and Kathy Webb at 9:26 AM