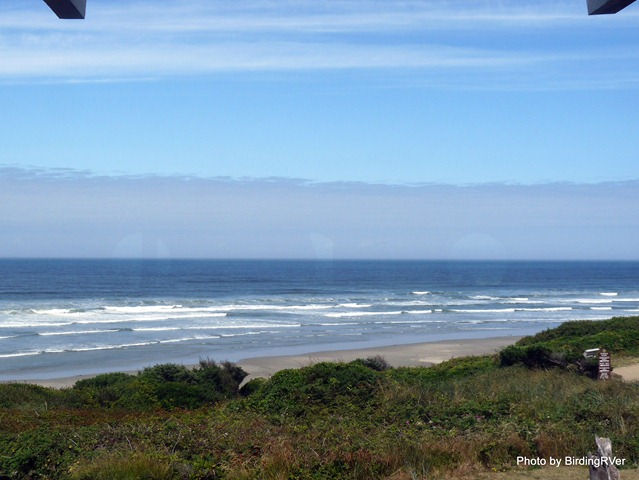 The view from our table at Georgie’s Grill

Our busy social time in Newport continued with a visit from Laurie & Odel. They have been fulltime RVers  since 2003. Laurie writes their very popular blog “Semi-True Tales of Our Life on the Road” and they are active members of the Escapee RV Club sub group known as BOOMERS. I started reading their blog years before we started on the road to get information of what the full-timing life style was all about. We did meet them very briefly in Tucson just after we started on the road in 2008. However, that was just before we got sick. (Blog entry for Tucson 2008). They arrived just before lunched and asked for a recommendation. Naturally we suggested Georgie’s Grill. Odel is on a personal quest to find the world’s best clam chowder. He declared the clam chowder at Georgie’s Grill  as excellent. We could all see the hunks of clams in the chowder (this of course required us to return to Georgie’s later in the week to try it for ourselves). 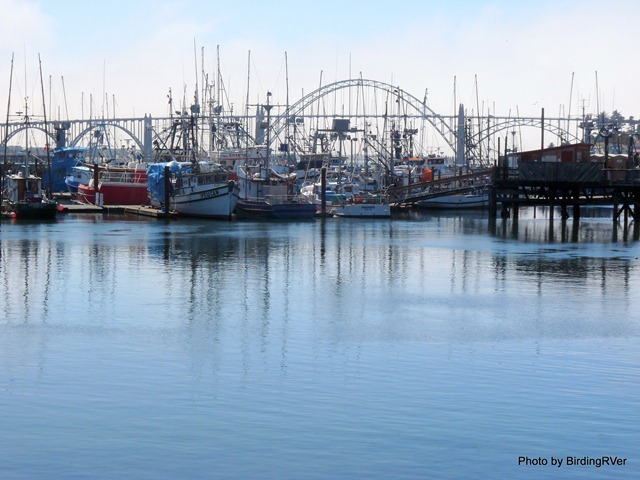 In the foreground a small part of the fishing fleet with the Newport Bridge in the background.

One day we decided that we needed to see some of the sights of Newport and went for a stroll through the Historic Bay Front part of Newport. This is naturally right on the water and still has working fish processing plants and a lot of fishing boats. The area is however primarily a tourist area with restaurants, shops, galleries, hotels, fishing charters. wax museums, etc. 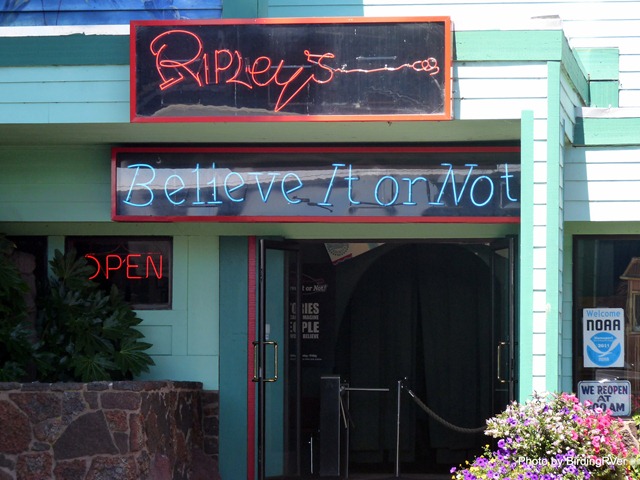 Newport’s Historic Bay Front has all of the usual tourist attractions. 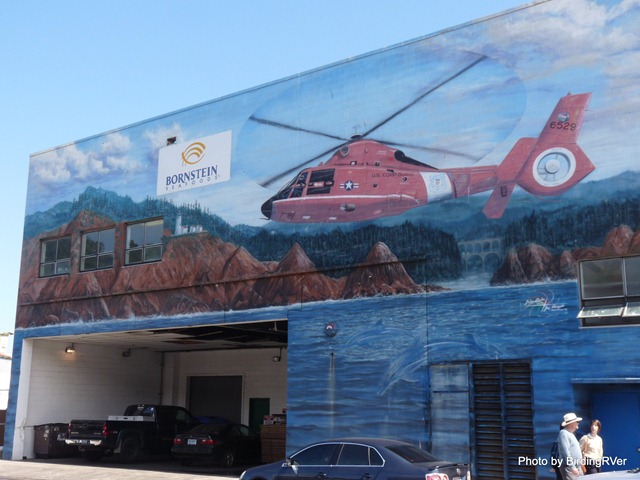 The Bay Front also has some interesting murals 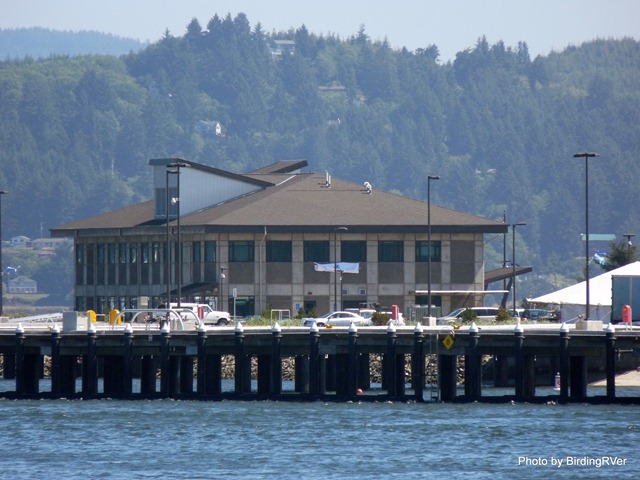 This is the new home of NOAA’s Pacific Marine Operations Center. We went to the open house and learned that NOAA is a lot more than just the National Weather Service. 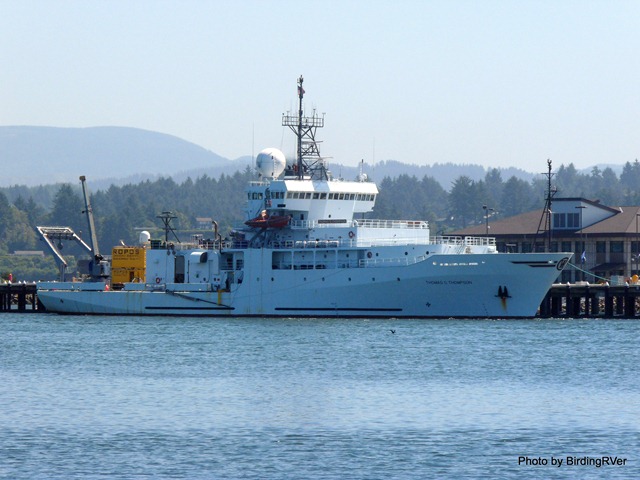 NOAA ship Thomas G. Thompson it is 274 feet long, 52 feet wide and spends 250 - 315 days a year at sea doing scientific research.
One day Bob & Pam came by to pick us up for a lovely ride along the Yaquina River to the small town of Toledo, Oregon. We went to the Toledo Wooden Boat Show. This was a small town festival at its best on the warmest day of the year (75 degrees). This is also the furthest inland Kathy and I have been since late April. 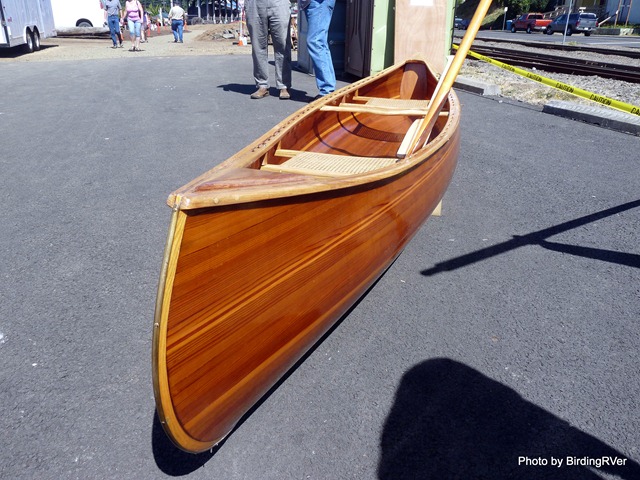 Although the Toledo Wooden Boast Show had many hand made wooden boats this one was my favorite. I could not imagine actually getting it wet or risking it being hit by a rock in a stream. 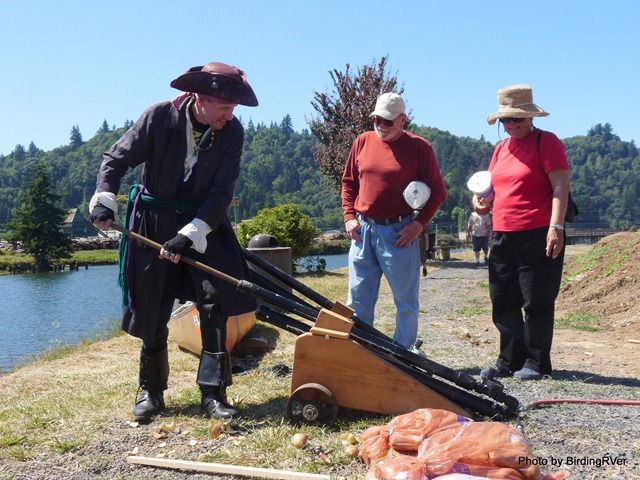 Apprentice Pirates Bob and Pam learning how to load the “Potato Cannon”. 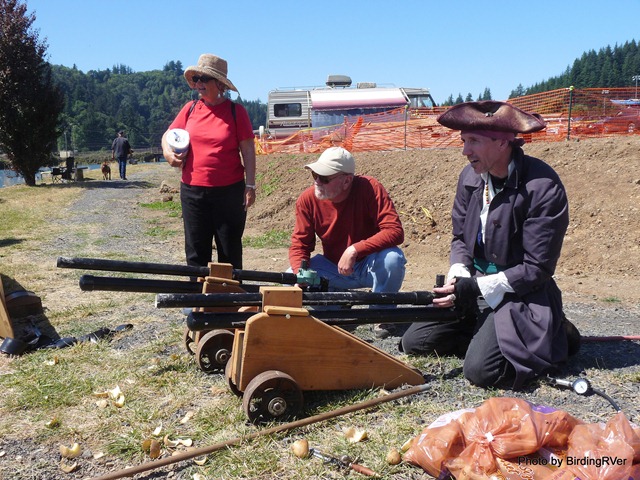 Apprentice Pirate Bob at gunnery practice with the Potato Cannon.
Lookout  Montana Owners dot Com Quartzsite crowd. There may be a Potato Cannon in Bob’s near future. 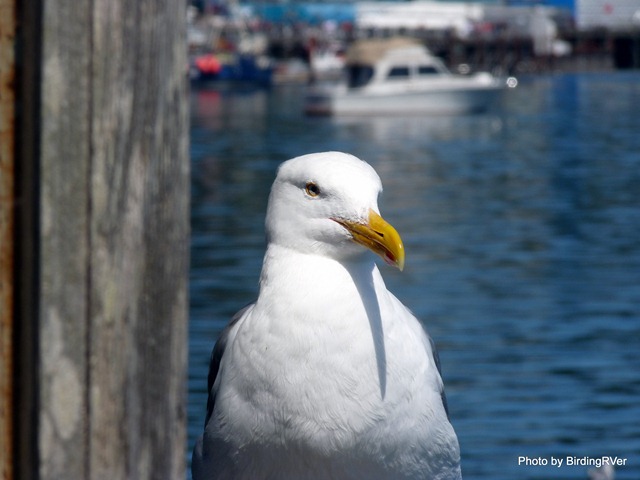 Herring Gull
Bird notes:
When we first arrived here we saw a Bald Eagle flying over everyday but, it hasn’t been by since. However, we do see a lot of gulls (Herring, California and Western), we also see Great-blue Herons and Osprey daily. Other bird seen lately: Spotted Towhee, Great Egret, Snowy Egret, White-crowned Sparrow, Brant & Pelagic Cormorants and Common Murre.
Posted by Grant and Kathy Webb at 7:04 AM