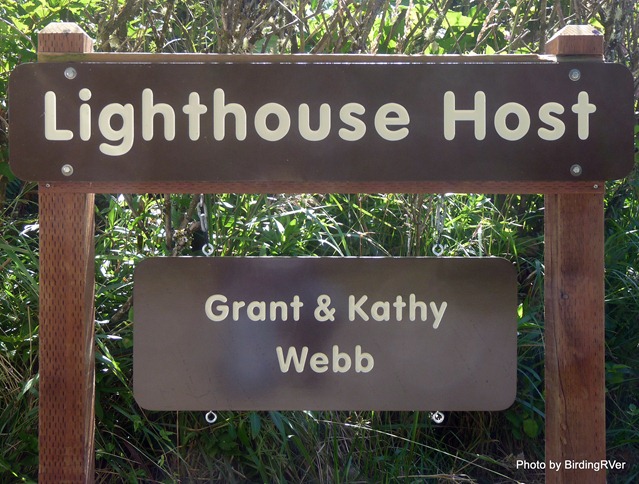 We are back at the Mill Casino RV Park, the land of fast Internet, consistent cell phone service and Porter’s RV Dealer.

I had written last time about Cape Blanco: “This is the western most point in Oregon and VERY WINDY ALL OF THE TIME!!” It lived up to our expectations it is either windy and clear or windy with fog. That said we had  wonderful time at Cape Blanco and got to work with a group of great volunteers.

Volunteering consisted of working at 4 rotating stations. The first station was the “Greeter”. Who would meet people as the approached the lighthouse to welcome them to the lighthouse and tell them about the tour, visitor center and gift shop. The second station was the beginning of tour, called the “Storyteller”. Who would try to give visitors some idea of life out on this wind swept isolated peninsula back in1870 when the lighthouse first opened. Both the Greeter and Storyteller stations where outside in the 20 to 30 mph winds and fog. One day when Kathy was the greeter she worn 2 pairs of pants, a polo shirt, a sweater, a winter coat, gloves and her volunteer jacket and hat!  (Note from Editor: ‘cause she froze the day before!) 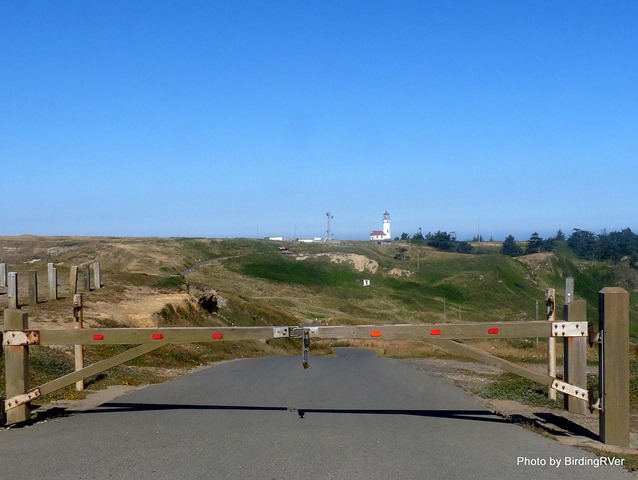 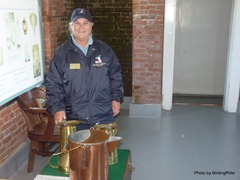 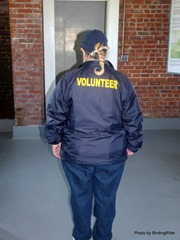 Kathy in her volunteer uniform in the Lighthouse Workroom.

Station 3 was the “Workroom”. In there we would tell the visitors on the tour about some of the duties a lighthouse keeper had to preform each night. 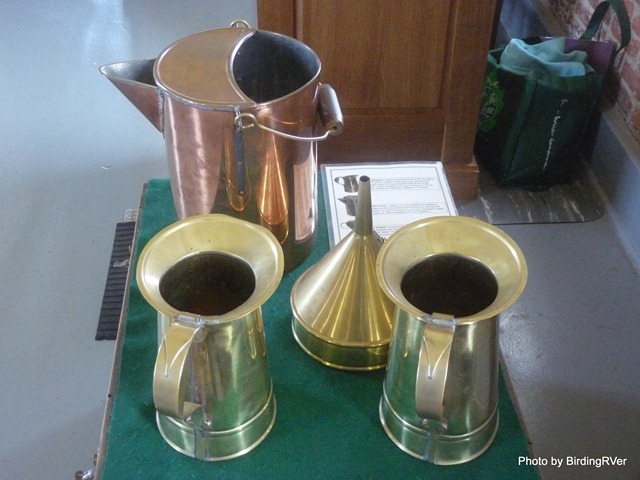 Some of the tools the Lighthouse Keepers used. 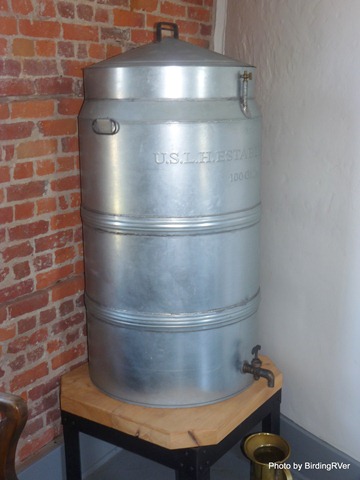 Before the light was converted to electricity in 1936 the Oil Room held 8 of these 100 gallon oil storage containers.

Station 4, however, was the best station of all - the “Lens Room”. After a climb of 64 steps you were right next to the Fresnel lens. Here we would enjoy the view and tell visitors the history of the lens that had been used at Cape Blanco Lighthouse. How the lens had operated, what the keepers had to do to maintain the lens and answer any questions that tour group had. We could only bring 5 people at time up to see the lens and we had 100s of visitor each day. Even on very foggy and windy days. 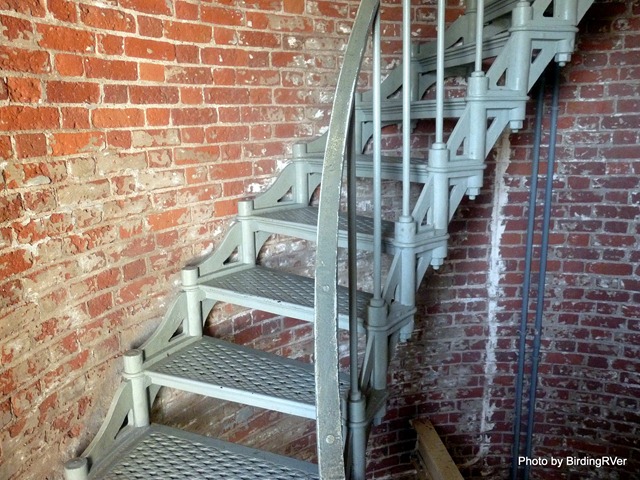 The first of the 64 steps to the top. 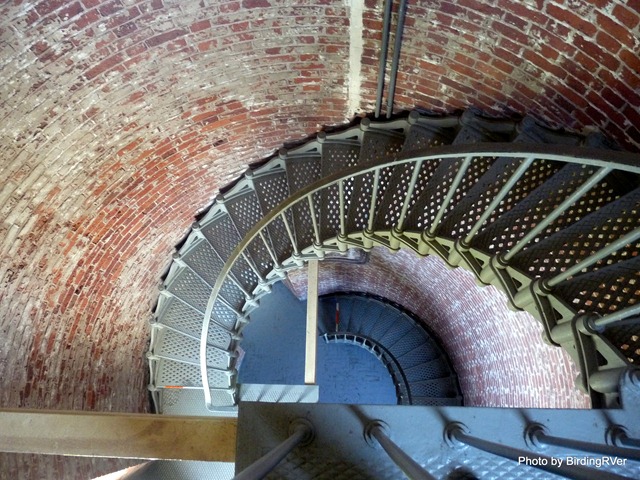 Only 2 more flights of stairs to go. 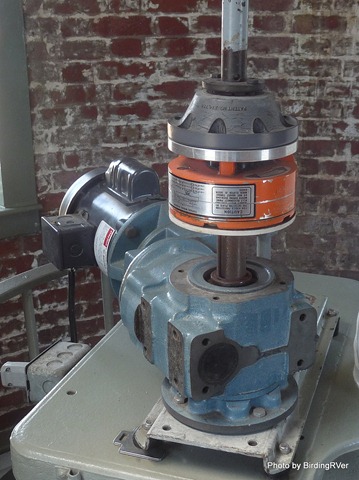 In the “watch room” is the 1/4 horsepower motor that turns the 2,000 pound lens 24 hours a day. This is the also the place we had people wait until it was their turn to come up to the lens Now only 11 steps up the final ladder to the lens. 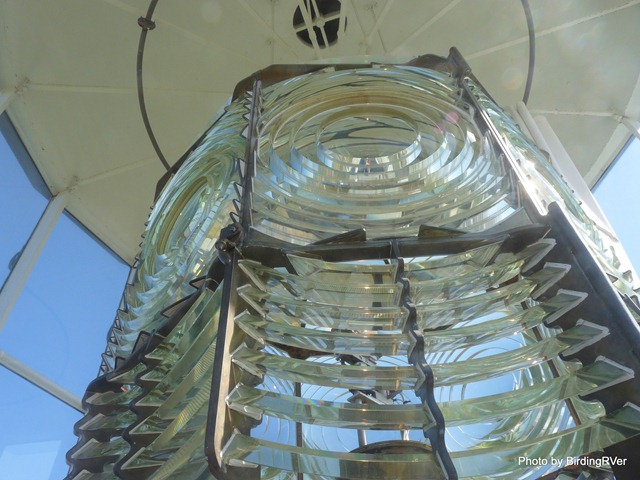 The first view of the lens as you come up the ladder! I think every time I brought a new group to the the lens someone always said “WOW!”. It may have been a child, but as often as not it would be an adult. 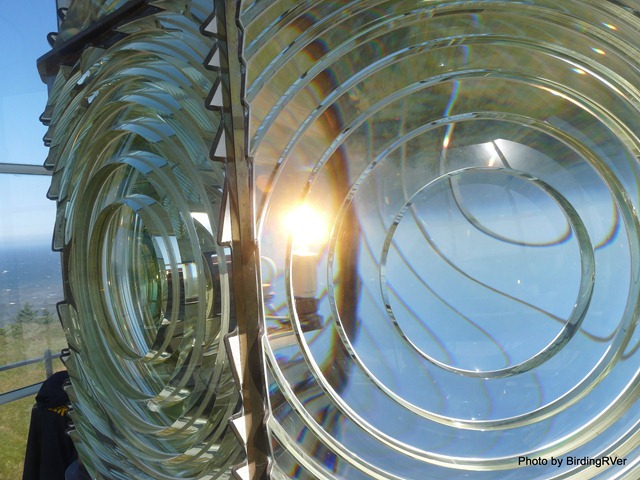 Yes, the light is always on. However it is much smaller than it appears when looking through the Lens. 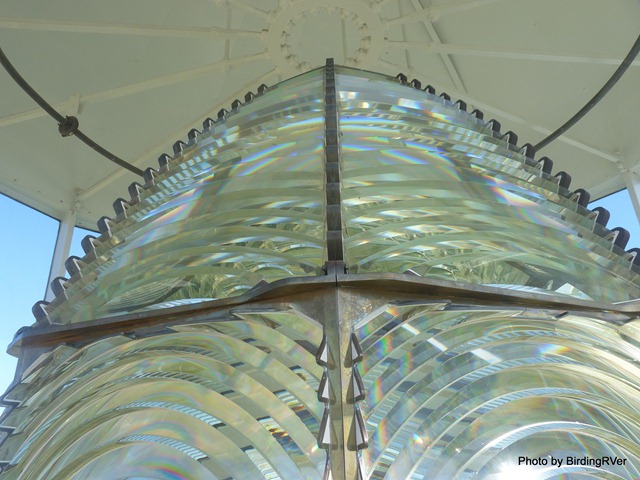 A view of the top of the Lens. 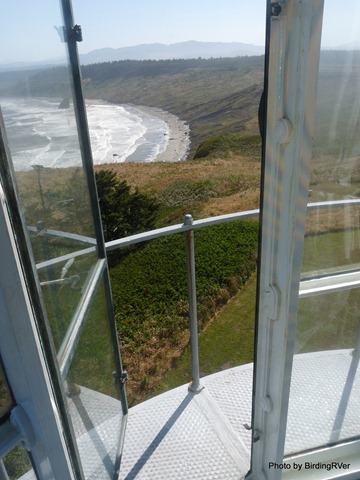 Ever wonder how the Lighthouse Keepers got outside to clean the windows? 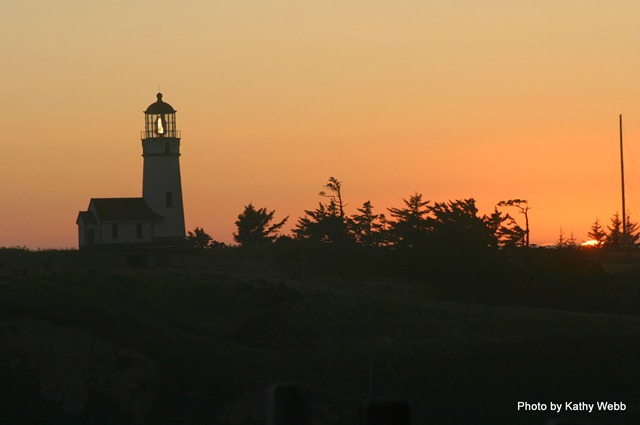 About 12 miles from the Cape Blanco State Park campground is the small town of Port Orford, Oregon. The town has one small grocery store and half a dozen places to eat. The best of these is the very popular Crazy Norwegian Fish & Chips. Yes, they have good fish & chips, they have a GREAT Crab sandwich, but they also have the BEST Fish Taco I have EVER HAD ANYWHERE!

The town of Port Orford is also the home of the Port Orford Lifeboat Station Museum. The Coast Guard used this station from 1934 until 1970 to send out Lifeboats to rescue people from sinking ships. 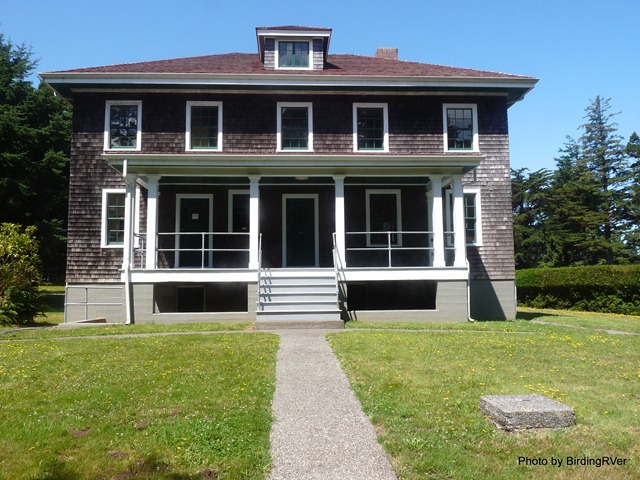 This is the front of the Lifeboat Station Museum. 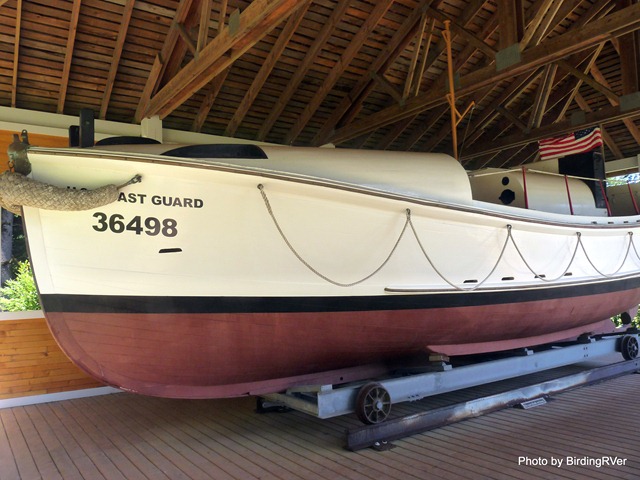 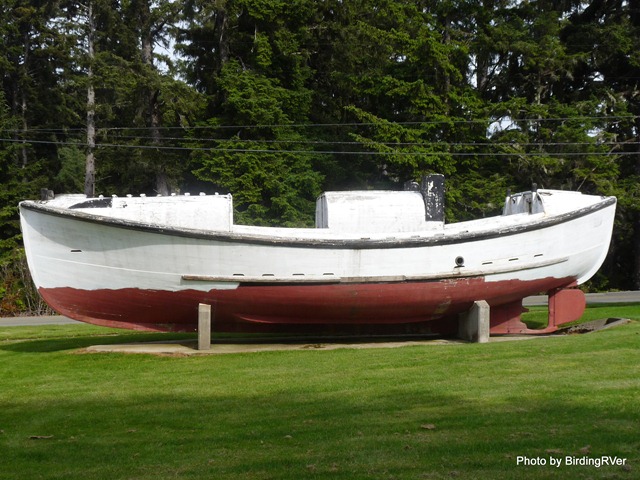 The unrestored 36 foot Lifesaving Boat back at the Umpqua River Lighthouse Museum. 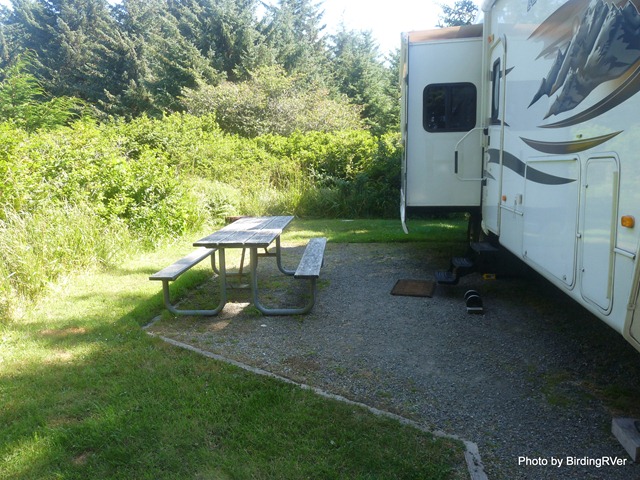 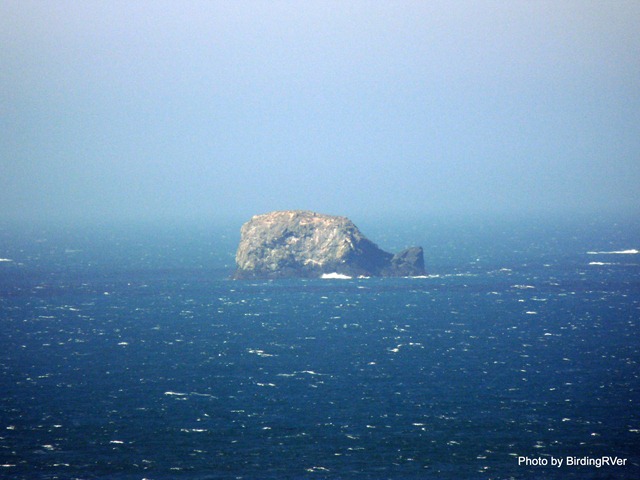 This rock is just off the coast at Cape Blanco. We have no idea what it’s real name is, but we thought it looked like a whale. So we called it Whale Rock. 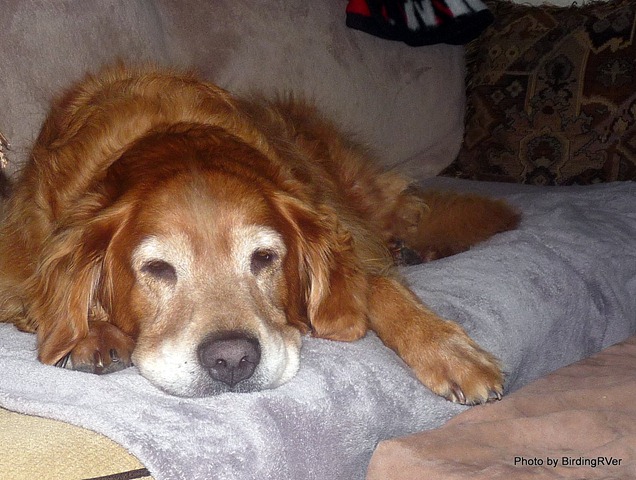 I have to guard the trailer while they are at the lighthouse and I am exhausted!

Cape Blanco has a huge numbers of Swainson’s Thrush and American Robin. We also saw Wilson’s Warbler, Orange-crown Warbler, Song Sparrow, Fox Sparrow, Savanna Sparrow, White-crown Sparrow, American Crow, Common Raven, Wrentit, Steller’s Jay, Turkey Vulture, Osprey, Western Gulls, Ring-bill Gull, California Gull, one Herrmann's Gull and a few Brown Pelicans. The beaches around Cape Blanco are made of fine rounded pebbles than sand. That may explain why we never saw a single shorebird in the month we were there. 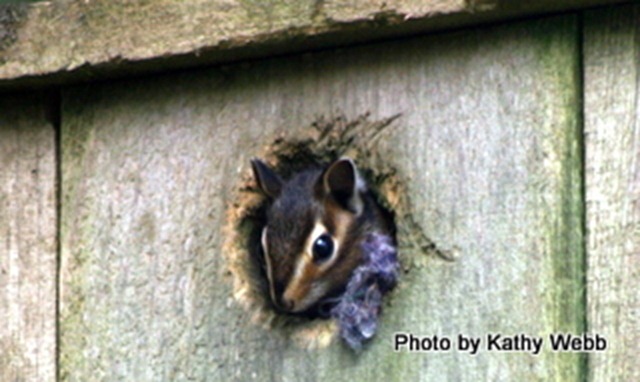 Although there are many bird boxes throughout the Cape Blanco State Park we never saw a bird using one of them. This young chipmunk was getting ready to fledge!