Although we are posting this blog entry the 3rd week of October, we were actually on Prince Edward Island at the first week of August.

Continuing our summer journey to the Atlantic Provinces, we headed towards Prince Edward Island. Located off the northeast coast of New Brunswick and Nova Scotia. The Island is accessible by ferry or the Confederation Bridge, a multi-span concrete bridge. It’s a rather unique fee system: they don’t charge you to cross the bridge OVER to the island, but when you LEAVE the island! It is the longest bridge in Canada, spanning 8 miles over the icy waters of the Northumberland Strait. Construction began in October 1993 and was finished in May 1997. Before that time you could only reach the island by ferry service. During the winter months when the Strait freezes over, the islanders were isolated from the rest of the country. Here’s a link to see a photo gallery of the bridge: http://www.confederationbridge.com/en/photo_gallery.php 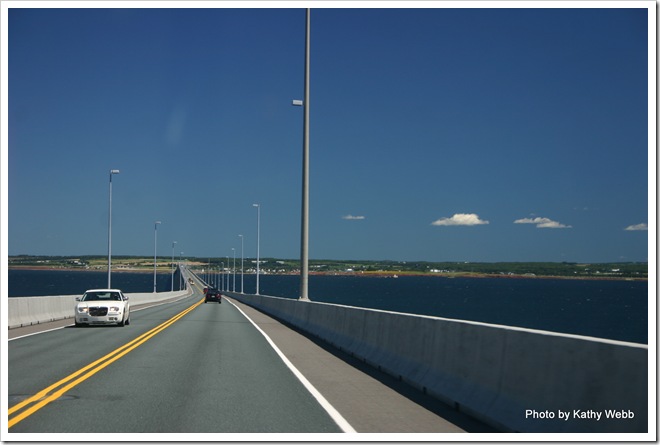 Almost to Prince Edward Island on a sunny windy day

The name of the bridge comes from the fact that back in 1864, the Provinces of New Brunswick, Nova Scotia, Ontario and Quebec met in Charlottetown, Prince Edward Island to form a confederation to what we now know as modern day Canada.

After reading the “Anne of Green Gables” series, I wanted to find out for myself the charm of PEI. Author, Lucy Maude Montgomery, wrote the series of “Anne” and “Avonlea”. She was born in the area of what is now New London on the north side of the island in 1874, near Cavendish. Her fictitious town of Avonlea is where Anne came to live with Marilla and Matthew Cutthbert, first published in 1908. The novels became the basis for the highly acclaimed 1985 CBC television miniseries, “Anne of Green Gables” and several other television movies and programs, including “Road to Avonlea”, which ran in Canada and the US from 1990-1996. Surprisingly, the shows were filmed in Toronto and only the outside scenes were filmed on PEI!

We stayed at the KOA in Cavendish, just a block from “Avonlea”. National Parks Canada built a park to represent what Avonlea would have looked like in the early 1900’s. All it needed was Megan Follows, the actress who portrayed Anne, to show up! 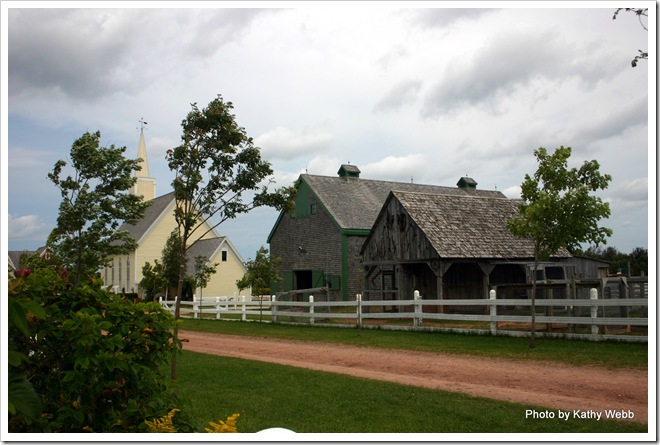 Recreated village of Avonlea, in the era IF Anne had lived here 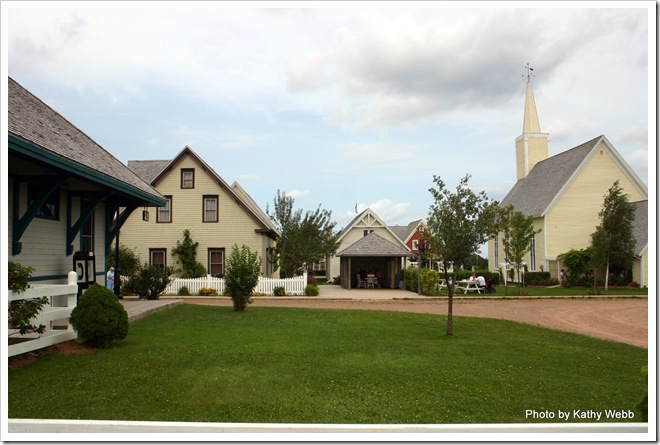 Our location was a good central point on the island to visit the red sandy beaches, Charlottetown, which is the capital and the North Cape side of the island. 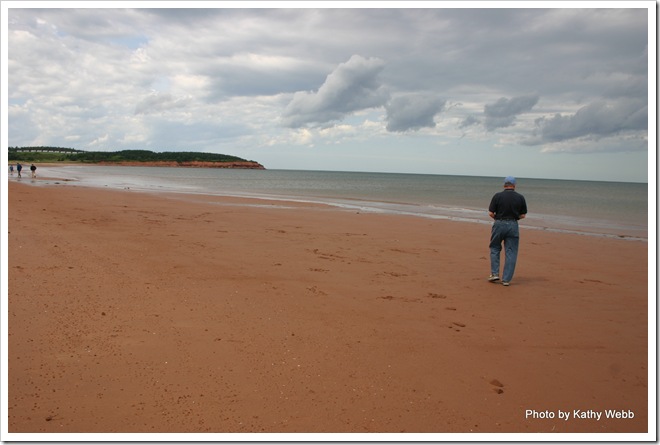 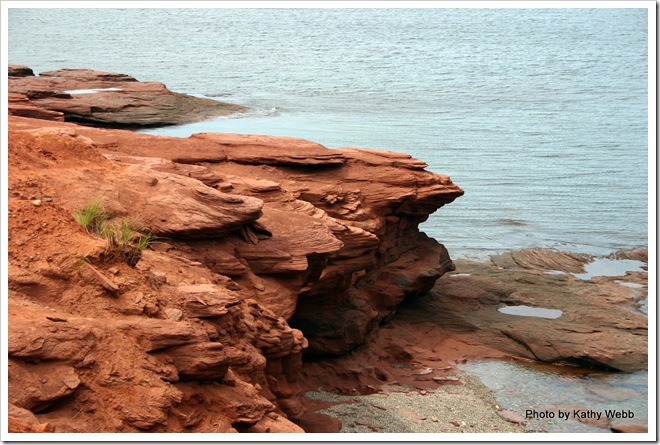 Since it was summer time, the KOA was busy all of the time! They had “hay rides” for the kids around the park, craft activities for the kids and a giant bouncy pillow apparatus, the size of a large garage, was a great hit! Nearby there are several theme parks, water slides and the Boardwalk Gift Shops, so there are lots of fun things to see and do as a family.

We had several beautiful sunny days in early August to enjoy the views of the beaches. In fact, one day we thought for sure we must be at one of our California beaches: it was wall to wall people taking advantage of the warm afternoon at the sea! 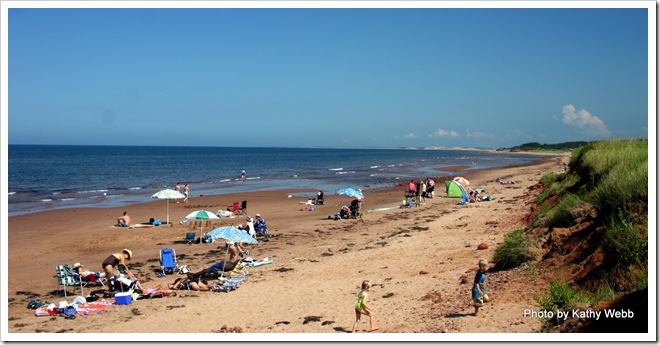 It was THE day to go to the beach on PEI

Looking off the coast to the Gulf of St. Lawrence, you could imagine all of the ships that have been past here! Ships from Canada going to Europe and other faraway places over the last 300 years or more!

Mentioned in the “Road to Avonlea” series is the White Sands Hotel, with beautiful scenes in front of the hotel. There actually is a very beautiful Victorian hotel called the Dalvay By the Sea, located near Cavendish. http://www.dalvaybythesea.com/ 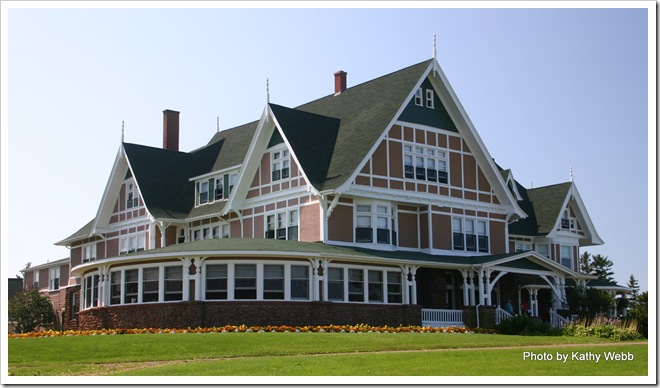 The Dalvay Hotel, known as the "White Sands Hotel" in the "Anne of Green Gables" stories

Scenic Dalvay Lake is in front of the hotel with Adirondack chairs to relax in and enjoy the view! Since it was a warm day, it was nice to just sit, take in the shade and scenery. 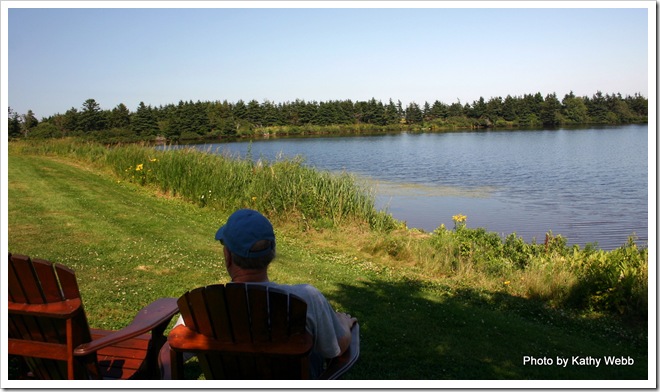 One overcast day we took a drive out to North Cape to see the North Cape Lighthouse and the Windmill Farm. With just enough time to walk around the point, take a few pictures, the dark skies opened up and it poured the rest of the afternoon. Oh well, that is part of the reason why the island stays so nice and green.

Looking off the cape into the Gulf of St. Lawrence 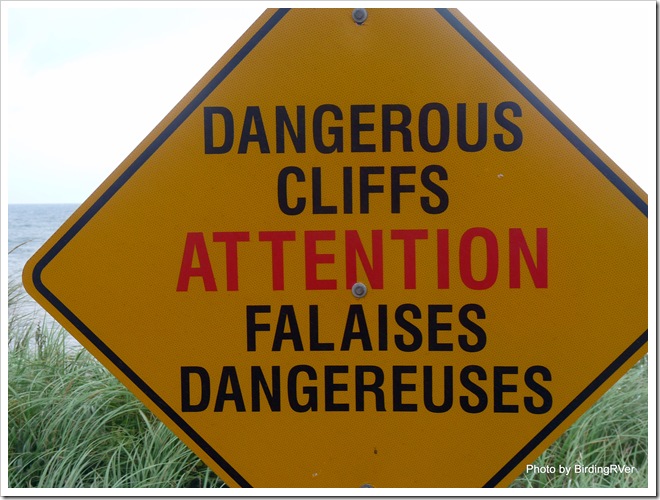 There are miles and miles of beautiful green farms, mostly growing potatoes and a very short wheat species.

One of the many potato farms on PEI, they go for miles!

On the way back to camp, we stopped at one of the vegetable stands for fresh veggies. We couldn’t pass up “Webb’s Vegetable Stand”. I had never seen so many different kinds of potatoes, from little tiny ones to good baking size spuds!

A few days later, when the sun had returned, we spent the day in Charlottetown. Walked along the river front and strolled around town. We enjoyed a delicious lunch at Hunter’s Ale House, one of the outdoor bistro/pubs that I had read about online. It was very good food and tasty brews on a summer’s day!

This is a big college town, several colleges and a university within the city. Although it was summer time, I can only imagine how busy the town must be now that school has resumed.

Even though we don’t golf, this island has absolutely gorgeous golf courses. 34 courses to be exact! It is one of Canada’s top golf destinations! From 9-hole to full 18-hole courses, you could enjoy a round, have time for lunch, go shopping, visit the beach and have a wonderful lobster dinner, all in the same day!

If you are into Lighthouses, PEI has 50 lighthouses dotting its coast, 40 of which are still operating. They are all different heights, colors and shape, each unique, with a compelling history with a story to tell.

After enjoying a relaxing week, it was time to say “Goodbye” to the Island and cross the Bridge. Since we were towing the trailer, the fee was over $54 (Canadian dollars) Ouch! They charge by axle and we had 4 with the truck and trailer. Oh well, if we had taken the ferry it would have been double that! At least it was Free to come over to the Island! LOL

On to New Brunswick and Hopewell Rocks. To be Continued…..

Posted by Grant and Kathy Webb at 2:15 PM