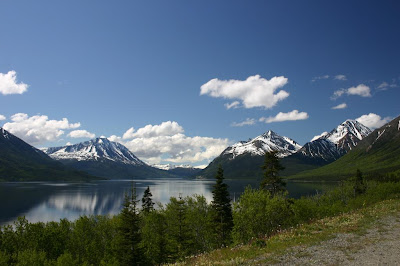 When Kathy and I first came to Alaska in 1998, our cruise ship stopped at Skagway and we took a bus trip to Carcross Yukon and then retuned via the White Pass Railroad to Skagway. We had the opportunity to dip our toes into the Yukon so to speak. Today we awoke to a glorious day and we went to revisit Carcross, about 45 miles west of Whitehorse.

Carcross is literally named because it is where the Caribou crossed between Bennett Lake and Tagish Lake during their migration. Carcross is more famously known in its role during the Klondike Gold Rush. Once the would-be prospectors carried there 1 ton of gear up the Chilkoot Trail, they arrived on the shores of Lake Bennett, the head waters of the Yukon River. They had to cut trees and start building boats and rafts to get themselves and all of their gear down the Yukon River to the Dawson City goldfields 400 miles away.

Posted by Grant and Kathy Webb at 7:44 PM