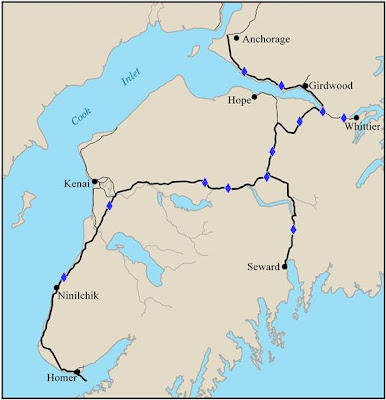 A map of the Kenai Peninsula
Today’s blog written by Kathy
As we have reported earlier, this has been a cold wet summer for Alaska. Despite the rain, we decided we wouldn’t rather be anywhere else to just kick back and relax than in Homer. When Grant went up to the office at the RV park to extend our stay another week, Glenda in the office said not to worry, she’d already made room for us and we can stay in the same site. Great! She did warn us that 2 more caravans were coming in on Wednesday but would leave by Sunday, Holiday Rambler and Fantasy Tours.

These groups were a more quiet than the previous two groups and more considerate. Several days we slept into almost 8:00, because nobody woke us up hollering on their way to the fish docks at 5:29 AM. There were 3 days of non-stop rain of some kind: drizzle, mist and absolute down pours. Even though we are on hard packed gravel, the rain wasn’t sinking in like it had! Rain or shine, there are still the multiple dog walks Raider requires, and even he headed straight back to the trailer to get in out of the rain. No long walks on the beach for a few days.
I forgot to mention a lady we had met on the bay cruise to the Rookery!
Her name was Liz Bashaw, who owns the Alpenglow Chalet/Bed and Breakfast. She had a day off from the B&B and had decided to take the cruise of Kachemak Bay. While waiting for the boat trip, she overheard us say that we were from California. It turns out she’s from Chula Vista, CA, near San Diego and they run the Chalet and B&B during the summer up here in Alaska. Her husband is quite handy in construction, so he has guaranteed work no matter where he is and she is also a registered nurse. They stay in Homer until about November and then head south for winter. I was so busy taking pictures of the scenery that day that I forgot to get her photo! 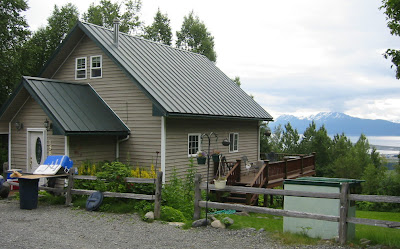 Sunday in the afternoon we took a drive up to the highpoint above Homer, to look out and also find the Alpenglow Chalet. It is a way up the hill with a breath taking view of the bay and Homer Spit! I stopped by in front to take pictures, hoping Liz would be home, but she must’ve been at the B&B, which is down the hill, a few miles outside of town. It’s the weekend, I’m sure she’s really busy.

Oh well, it looked like such a charming place to stay in Homer. If anybody is looking for a nice place to stay, here is the website: http://www.alpenglowcabin.com/
Saturday was rain-free and the sun even sneaked out for several hours in the afternoon, how nice it was! We walked down to the beach and watched a pair of Sandhill Cranes out on the sandbar. They weren’t in any sort of hurry, took their time to preen themselves while several of us looked on with fascination. Cranes are graceful and elegant. Naturally, I left the trailer without the camera not expecting too much on our walk!
In the evening there were no clouds in the west when the sun slipped down below the ridge. As I let Raider out for his nightly run before bed time I noticed a bright light in the sky, something we hadn’t seen since May in West Yellowstone! Is it a UFO?! No, it’s the full Moon, brightly shining over the bay!
Sunday morning we slept into 8:40 when we heard the first rumblings of the caravans getting ready to “bug out”. That is always so interesting watching these monster RV’s move. Do they have a coin toss to see who leaves first? Unfortunately, the couple in the big motor home directly behind us was having mechanical problems. Since our Montana has the great big picture window on the back, I could actually look over the guy’s shoulder as he was fixing the “do-hickey” and the “watch-a-ma-call-it”. Then he had to call in for back up. The tail gunner came to the rescue and they were ready to go by 10:30. By 11:00 AM, both caravan groups were gone and we had our scenic view spot again!!

The tide was way out due to the full moon, time to check it out. Raider was ready for a run on the beach, but the trail was still slippery so I convinced him we didn’t need to walk ALL of the way down there. I was able to get some photos from the bluff showing the low tide. 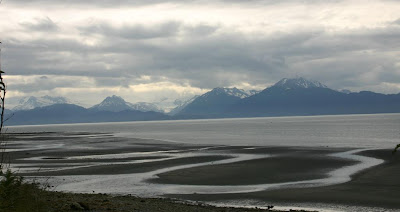 Then we walked up the hill and over a block where there’s a better viewing spot. As we’re standing on the bluff, I could hear the unmistakable call of the Sandhill Cranes. (At least a pair of them comes buzzing by our campground several times a day, but I hadn’t seen them in a few days.) I called out to them, “Hey, where have you guys been, goofing off?” All of a sudden they changed course in mid-air, made a right turn and flew directly over us! How cool is that?! Were they just curious of us? I don’t know, but I had a lot of fun attempting to get photos of them! Even Raider was watching their graceful flight overhead. And that call of theirs! It sounds something prehistoric like it should be coming from a “winged-dinosaur”!! 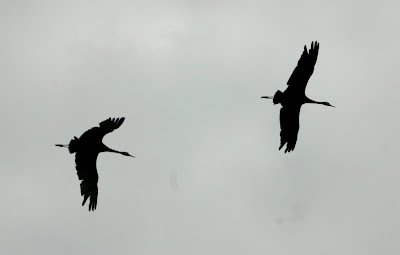 Monday-Aug. 18th we called Tim, our oldest son back in Chicago, to wish him Happy Birthday. Later we celebrated Tim's 29th birthday at Captain Paddies for lunch. Grant enjoyed the baked Halibut and I had the Crab Melt Sandwich, two of our favorites there. Outside it was intermittent sun, though the clouds were gathering, inside it was cozy with great food, good music to dine with and a view of Homer Spit! A fond memory for later!
By 4:00 PM it was drizzling and by 6:00 PM it was pouring very hard! In fact, at one point it was louder than the TV! It rained all through the night, but the next morning we could see clear across the bay and by 11 AM we had sunshine, which lasted all day!!
Not wanting to waste the sun, we took Raider for a long walk, enjoying the sea air and Homer's incredible view. When we got back to camp the first RV's were rolling in for yet another caravan! This was an Airstream group, trailers and motor homes. We were allowed to stay in our spot and they worked their way into their sites all around us. We are the SOB's in the middle! (Some Other Brand) Friendly folk, more around our age, on a 65 day whirlwind trip of Alaska, starting from Dawson Creek, BC. They endured lots of rain, rough roads (like that's new!), but they have the distinguished award for having one of their rigs attacked by a bull moose!
Fred and Jo came over the peninsula from Seward to Homer today and we stopped by during "social hour" to say hello and meet their daughter Faith and her daughter, little cutey, Isabella. What a treat to meet them after hearing so much about the family! Isabella was having a fun time playing with Boo Boo, the shitzu, while we chatted!

After that, since it was late, we opted to go to the Cosmic Kitchen for burritos. These were the largest burritos in the world!! They were so big....you had to eat it with a fork. There was no way you could pick up in your hands like regular burritos! Delicious with all kinds of peppers and onions sautéed with the meat! Yum!This morning we woke up to more sunshine! Yeah! So we took the Raider dog for a long walk on the beach. Due to the extreme low tide there was so much sand exposed. We managed to get past the large stones and let him have a good run on the sand! Boy did he kick up his heels, he was in Fat City! I think he was thinking, "Now this is a beach!" The waves had made a wonderful pattern on the sand when the tide was high. Since it stays fairly shallow it resembled waves on a sand dune. 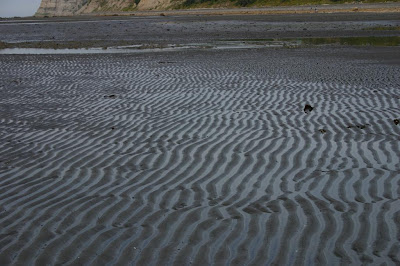 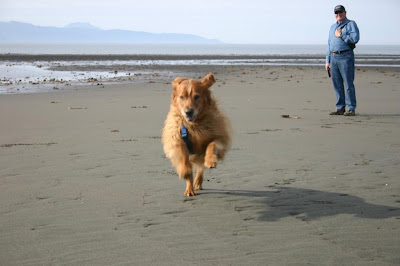 While walking along the beach we met the gentleman from Georgia, whose trailer had been attacked by the moose! He related the story of how he was driving, near Tok, Alaska, when all of a sudden a moose explodes out of the trees. He saw the bull and even pulled over to the side of the road to avoid him. The moose kept coming, hit their beautiful 1971 Airstream Classic mid-ship! With his rack he tore open a huge hole in the aluminum side!! The bull then stepped back, shook it off and charged back into the forest! They were stunned! They had saved up for 5 years to do this Alaska trip! Now their prize possession was a shambles! And the stupid moose lived! By the time they made it down to Fairbanks, their insurance company "totaled" the trailer as not repairable, and then handed them a check for the replacement. That sweet southern gentleman, with a great penchant for story telling we could surmise, told us, "I found someone who would buy the wrecked trailer as salvage!" So he came out of the deal very well!
I asked him, "It must have been sad to see it go?"
He replied, "well, yes, it was my favorite! I still have a 1975 Airstream and I'm in the process of buying a 1951 Airstream from a friend of mine. So, we're ok!". They bought a new trailer while in Fairbanks and have continued on the tour with the caravan.
BirdingRVers slide show of Homer Part 2
Posted by Grant and Kathy Webb at 7:47 PM